It was a very long and very exciting dart day yesterday!!! Of course Fallon Sherrock's win over Ted Evetts was the spectacular hightlight - she is now the first woman who ever won a match in a PDC World Championship. And she played well too and even twice threw six perfect darts. Beside we had a few one sided 3:0 wins by Damon Heta and Noel Malicdem and three hard fougth matches which were won by Ryan Searle, Jeffrey de Zwaan und Cristo Reyes... Exhausting and fascinating! And - both seeded players survived their matches!!! Today the evening session is firmly in German hands - Nico Kurz and Gabriel Clemens will stand on stage. As Walk-on song one can recommend the song "O Tannenbaum". Or better -the melody of the song which was already used for quite different songs. The choirmaster of the Leipziger Neukirche searched 1824 for a children's song for Christmas in his archive and found this song which originally was a sad love song, in which the fir tree was used as contrast to the disloyal lover. well, it changed into a declaration of love for the at this time already used Christmas tree. It took some time - till after the Second World War - before the song got really popular and got known in English and a French version as well. As the melody is so simple and known everywhere it was not only used for the Christmas song - though the text of "O Tannenbaum" often was spoofed. 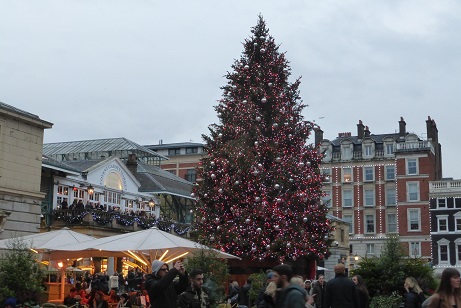 In other countries the melody for example was used with the text "The Red Flag" as song of the international labour movement and as the hymn of the British labour party. With the text "Maryland, may Maryland" it first was the battle song of the federate states in the Amercian Civil war and than as the hymn of the American federal state Maryland and the FC Chelsea sings the melody with "We'll keep the blue flag flying high". I really wonder why nobody till now had the idea to use it for a walk-on song.

The both seeded players of the day are Stephen Bunting in the afternoon session and James Wade in the evening session. The full range of unseeded players reaches from New Zealand over Japan to Europe and South America. Ron Meulenkamp will open the afternoon session against the debutant Ben Robb from New Zealand. The only fact I know about Ben Robb is that he is the DPNZ Qualifier which doesn't really help when you want to predict a match result.So I will have a cup of tea and wait and see.

After that Mickey Mansell will play against Seigo Asada. Asada is a strong Asian player - so probably Mansell will get into trouble evens so he sometimes showed great matches.

Harry Ward against Madars Razma is another match which is difficult to predict. Razma plays with success the Nordic and Baltic Tour but outside this tour didn't produce anything outstanding. Ward plays a similar level as Ron Meulenkamp who opened the afternoon session and still is rather inconsistent. For both players it will be the World Championship debut. Razma has more experience - might be that can help him. On the other side Ward looks like he is a pretty cool customer - that could help him. In the last match of the afternoon Stephen Bunting will come as seeded player on stage and probably he will not have too many problems with his opponent Aaron Monk/Jose Justicia. But I don't dare to commit myself to this after all those surprising second round results so far.

In the first match of the evening with Nico Kurz the first of three German players and the least experienced will stand of stage. James Wilson probably will not be unbeatable but Kurz never before played on such a stage and before such a crowd and never in a tournament so big - it will not be easy for him.

The second match is England v South America or Josh Payne v Diogo Portela. Both already stood on this stage before, both had a more or less unremarkable darting season. I myself think Payne is the stronger player but it is one of the attraction of those first round matches that they very often surprise you!

With Gabriel Clemens a strong and this year quite successful German player comes on stage next. He recently impressed in the Geand Slam. He will play against Benito van de Pas who had a disappointing year and had to qualify by the Tour Card Holders Qualifier for the tournament. One would think Clemens will have no problems to win this match.

The seeded player of the night will be James Wade and the same applies to him as to Stephen Bunting - he should have no problem to win the match. Though I almost don't dare to say such a thing.