For many punters, the festive period means just one thing - the darts World Championship. While Alexandra Palace, like most sporting venues over the last few months or so, is going to have a very different feel about this year, with just 1,000 boisterous fans in attendance and fancy dress strictly prohibited, we will still get to see all of our favourite players in action. 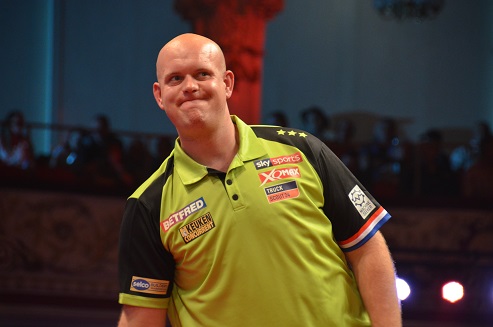 PDC World No. 1 Michael van Gerwen is no stranger to the iconic Ally Pally in North London, and he has become more than accustomed to the pressure put on his shoulders by his fans when he steps up to the oche. 
Three World Championship victories since 2014 means that the Dutchman's name can often be found amongst the favourites in the darts World Championship odds, but for much of this year van Gerwen hasn't been at his usual throwing best.
Up until the recent Players Championship Finals, 'Mighty Mike' had scooped a mere four titles, including victory in just one televised event - the UK Open back in March.

Van Gerwen was the World Darts Championship runner-up last January, losing 7-3 to Peter Wright, before he was dealt an early exit in the Masters, losing 10-6 to Jonny Clayton in the Last 16. His UK Open triumph was wedged in between a further two disappointing Last 16 knockouts at the World Matchplay, where he lost 11-4 to Simon Whitlock, and the Belgian Darts Championship, where he fell to a narrow 6-5 defeat at the hands of Michael Smith.

However, the Players Championship arguably couldn't have come at a better time for van Gerwen, as he got his year back on track with a slender victory over Mervyn King in a nail-biting finale.
The Dutchman, who boasted an impressive 102 average for the tournament, came back from 8-6 to book a place in the final against King with an 11-8 victory over Gerwyn Price.

It was neck-and-neck for much of the final, with the lead chopping and changing between the pair. Deadlocked at 9-9, van Gerwen took a 10-9 lead, which was quashed by a 13-dart finish from King. That set up a deciding leg, and it was 'Mighty Mike' who ended up victorious - despite agonisingly missing three match darts.

"I'm proud of myself, I've worked hard for this, and to come back stronger and stronger like this means a lot to me," the Dutch darts player said afterwards. "It's been a long time since I won a tournament so I'm glad I played a very nice tournament. I played well and I'm glad to have my hands back on the trophy. "I've been out of form for a few months and you need to battle back. You have to fight back and I'm glad I did."

These sorts of hard-fought finales are what make a true champion in any sport, and van Gerwen, who knows he hasn't been at his best this season, will now be ready and roaring to go come December 15th - so watch this space!