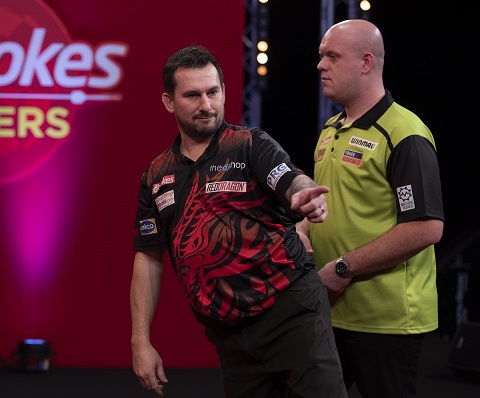 Van Gerwen was previously undefeated in 20 games on the Marshall Arena stage, but Welsh number two Clayton's superior doubling accuracy ensured the world number one's campaign got off to the worst possible start.
Clayton flew out of the traps, landing a 116 finish to open up a 3-0 lead, only for Van Gerwen - using a new set of darts - to wrestle his way back into the contest at 5-5. Not at his clinical best, Van Gerwen was unable to take a stranglehold on the game as Clayton won the next four legs, including a stunning 92 checkout using double 16 and double top, to go one away from victory at 9-5. After former Players Championship Finals runner-up Clayton missed a dart at bullseye for a 121 finish to win the match, Van Gerwen found the same target to save his skin with a roof-raising 164 checkout. However, the reprieve was short-lived for the Dutchman as the following leg saw Clayton find a third-dart double ten to pile the misery on Van Gerwen, who lost his World Championship crown to Peter Wright on New Year's Day.

"I'm one very happy Welshman! It's a brilliant feeling I've got right now," said Clayton, reflecting on one of his finest victories on a televised stage. "When you play Michael you know what to expect and I went into the game knowing how well I've played against him in the past. "I know the game is there for me, it's just a case of showing it more consistently and hopefully this is the start of big things to come from me this year. "I'm going to enjoy my day off tomorrow by watching Wales in the rugby and look forward to Sunday, who knows how far I could go? To beat the best player in the world is a massive step for me." 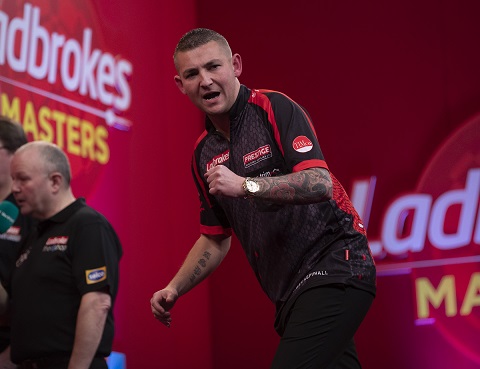 Clayton is now set to meet Nathan Aspinall in Sunday afternoon's quarter-finals, after the UK Open and US Masters champion enjoyed a winning Masters debut by brushing aside James Wade 10-4. A scrappy start to the game saw both players struggle to produce their best form, before world number eight Aspinall won the last six legs without reply to seal a comfortable passage through.

"I won the game but I wasn't happy with my performance," admitted Aspinall, the world number eight. "It was a tough game to play and it's the first game back after a break. I felt flat and I couldn't get into my normal rhythm, and James didn't get into the match. "Two years ago I'd have lost a match like that, but I dealt with the situation and came out on top. "I felt like I had a good few legs in the middle and my scoring was okay, but it was my debut in and I've got through it, so I can prepare for Sunday now." 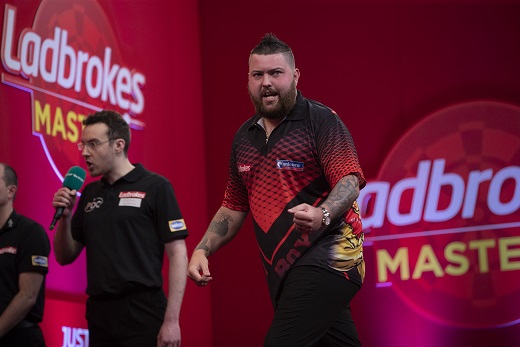 Number five seed Michael Smith got his year off to a high-quality start with a 101.85 average in an impressive 10-6 win over Mensur Suljovic in the opening game of the tournament. After Suljovic took the opening two legs, Smith won the next five to take charge of the contest, only for the Austrian number one to fight back and go within two legs at 8-6. However, Smith maintained his composure, taking out 113 to move to the brink of victory before firing in an 11-dart leg to advance to the quarter-finals for a third time.

"I'm feeling good, it's about time I finished well!" said Smith, who landed six 180s and missed just seven double attempts. "It's a great way to start my year off on the back of a disappointing end to 2019. "I feel like a little kid who's just started playing again, I'm really looking forward to playing all the time. "A loss there would've set me back so I'm glad I put in a decent average and performance to put me through to Sunday." 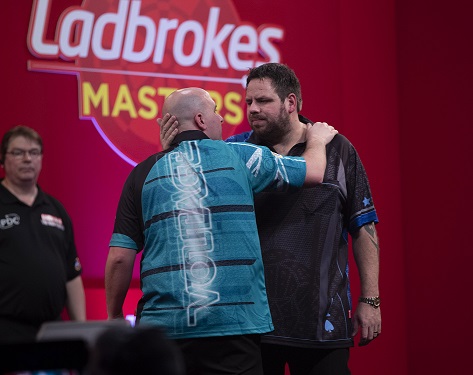 Smith will meet 2013 Masters runner-up Adrian Lewis in the last eight after he defeated Rob Cross 10-5 in the battle of the former World Champions. Both players struggled to find their range for the majority of the contest, but it was Lewis who managed to find more trebles over the course of the match to reach the quarter-finals for the first time in three years.

"We were waiting for each other to kick in I think and neither of us were happy with how we played, but I'm through," said Lewis, who also sealed victory with an 11-darter. "I've been practising hard and I will try to put things right, especially with my finishing because my doubles deserted me at times. "Consistency has let me down in the last 18 months and tonight was a prime example, but I know that if I click on Sunday then I could win this."