Glen Durrant lifted the Unibet Premier League title in Coventry on Thursday after defeating Nathan Aspinall 11-8 in the final.

Durrant became the sixth player to taste Premier League glory with his triumph at the Ricoh Arena, and the first since Michael van Gerwen in 2013 to win the tournament in their debut season.
The 49-year-old had already made history as the third player to top the league phase, and in the Play-Offs Durrant delivered with victories over Gary Anderson - after surviving four missed match darts from the Scot - and Aspinall to scoop one of the biggest crowns in darts.
The Middlesbrough ace had claimed the 25,000 pound league winner's bonus last month, and scooped the 250,000 pound top prize for the biggest pay-day of his career. 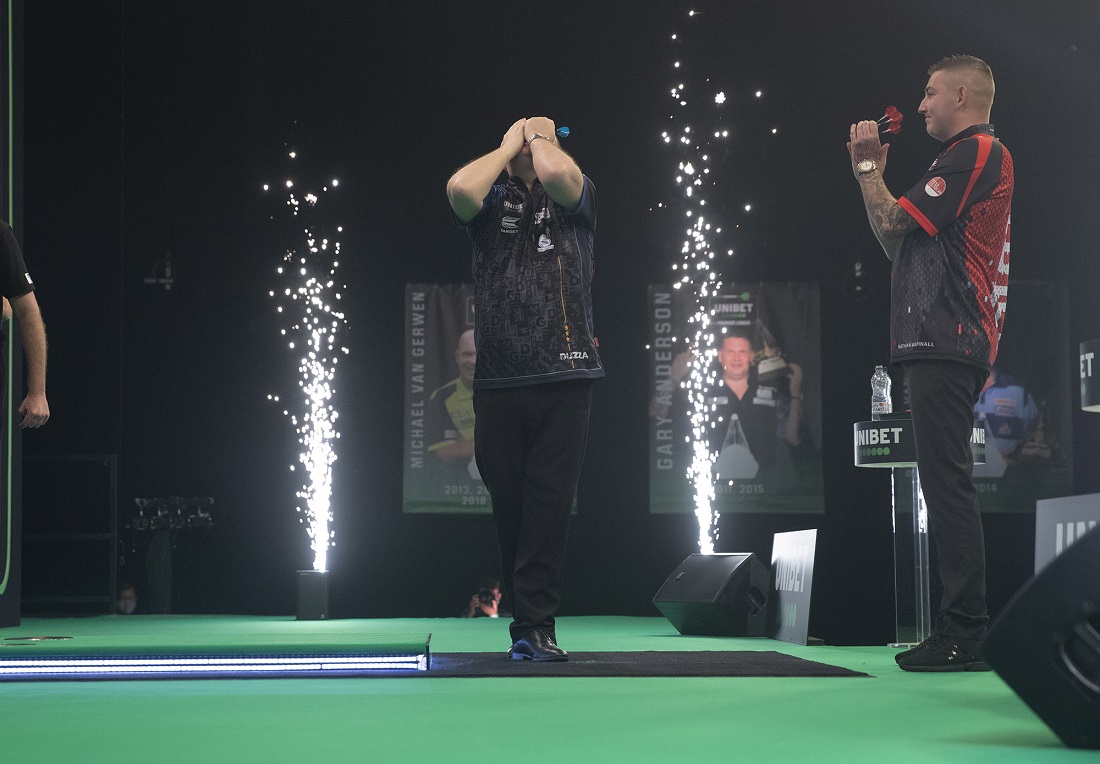 "It's unbelievable," said an emotional Durrant. "This supersedes everything I've achieved before. "Tonight I feel like the best player in the world and I've never had that feeling before. "I'm feeling absolutely fantastic, I'm ecstatic. This means an awful lot to my family, friends and supporters. "It's a mammoth achievement and it makes my move over to the PDC worthwhile. "The game against Gary will go down as one of the worst games in Premier League Play-Offs history but I knew I couldn't play that badly twice. "I stepped my game up massively for the final and I knew I had to beat Nathan, who is a consummate professional and will go on to achieve many great things in darts." 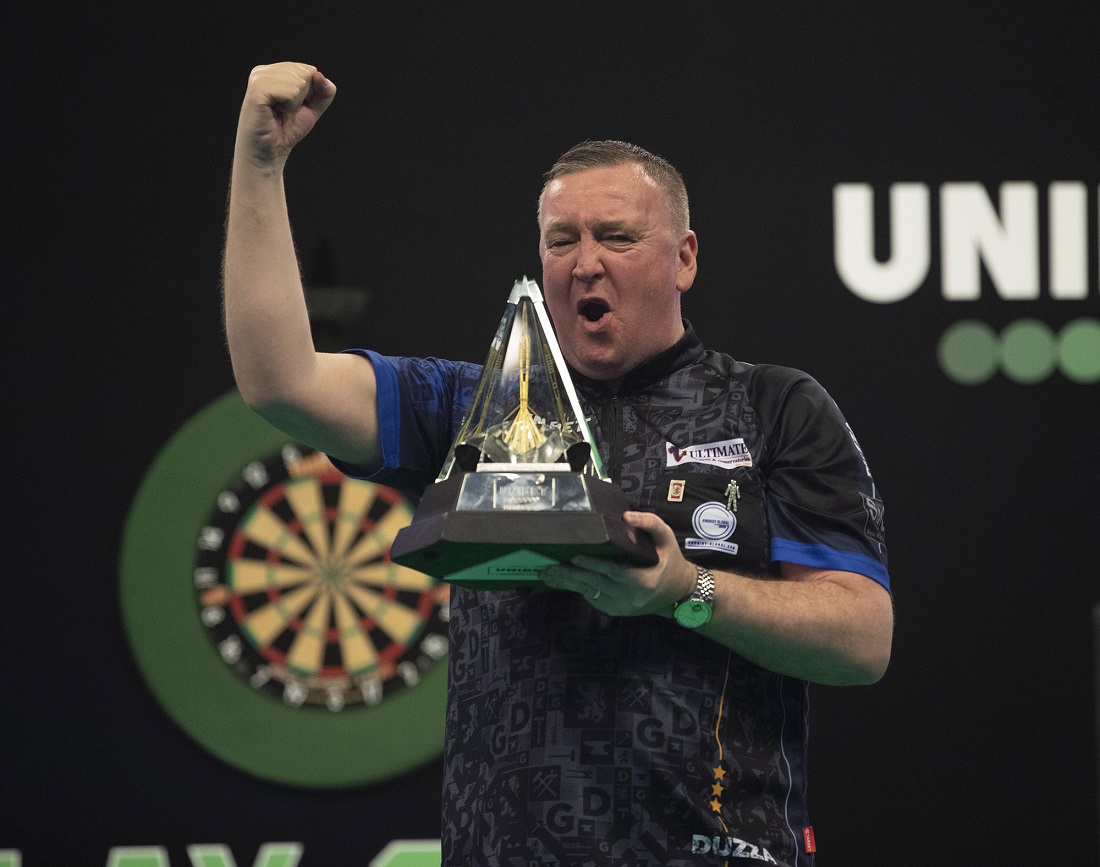 The 16th staging of the Premier League, which began in Aberdeen in February, reached its climax on Thursday as Durrant and Aspinall played out the first final between two debutants since the tournament's inception in 2005.
There was nothing to separate the pair after the opening 12 legs of the final were all won on throw, but two legs later Durrant punished five missed doubles from Aspinall to go 8-6 up. A 127 checkout followed for Durrant but Aspinall, who beat Peter Wright 10-7 in the semi-finals earlier in the night, replied with a 96 checkout to stop the rot. However, Aspinall was unable to find a break of throw as Durrant closed out the win on his favourite double 16 to claim the title and £250,000 top prize. 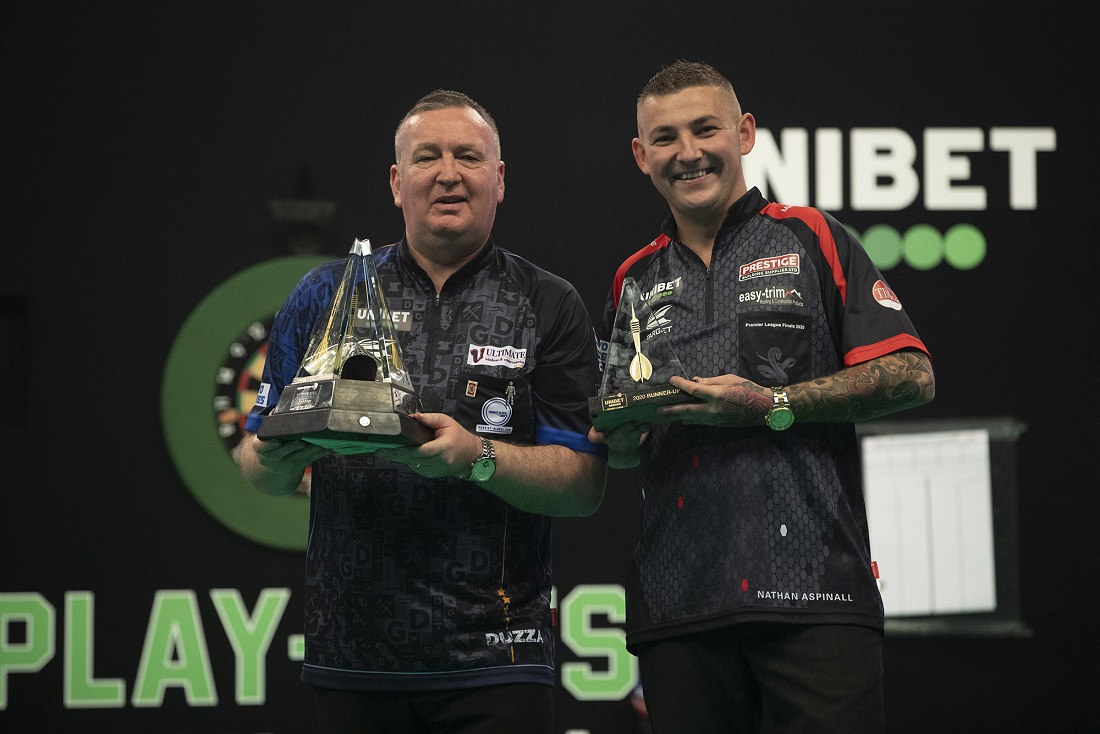 "Obviously, I'm absolutely mortified to lose," said Aspinall. "After beating the World Champion I felt I had another gear and that I was going to win the final, but credit to Glen. "He came top of the Premier League, he's probably been the best player throughout the competition and he deserves to win it. "It's still been a great debut year for me and I'll be back next year to go one better."

Anderson had seen his hopes of claiming a third Premier League title ended when he saw four darts for victory against Durrant go begging in their semi-final, including three in a dramatic deciding leg.
Wright also lost out in the semi-finals following a season which had seen him achieve a nine-dart finish during the league phase before finishing second in the final table.