Michael van Gerwen took another step towards a fourth William Hill World Championship title as he moved into the semi-finals along with Gerwyn Price, Peter Wright and Nathan Aspinall on Sunday at Alexandra Palace. 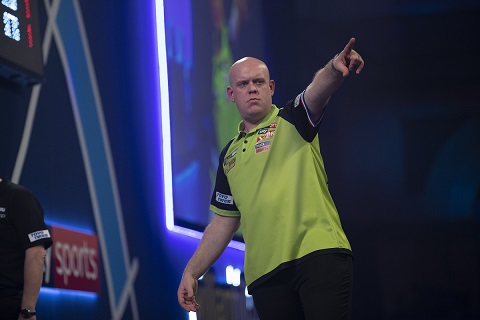 Van Gerwen continued his title defence with a 5-2 victory over Darius Labanauskas, who missed a huge opportunity to run the world number one much closer. Having taken the opening set, the plucky Lithuanian missed six darts to cut Van Gerwen's lead to 4-3 in the seventh, allowing the Dutchman to take another leap towards a fourth World Championship crown.

"I got the job done but I need to play much better," said the 2014, 2017 & 2019 winner, who will take on Aspinall in the last four. "I lost my concentration at times and I shouldn't do that but I also had some good moments. "I will put everything right for the next match. Nathan is having a great year and I think we can have a fantastic game but if I play to my top level I will have too much for him."

Labanauskas took the first set with a clinical 80 clincher in a deciding leg after the world number one had taken out 158 in leg four. Van Gerwen edged set two 3-2, punishing the Lithuanian for a missed attempt at the bullseye that would have seen Labanauskas double his lead. The Dutchman then ran riot in a bizarre third set, winning all three legs despite a pause in play while his opponent's cut finger - caused by catching his own dart - was treated by match referee George Noble. Finishes of 137, 84 and 72 saw Van Gerwen move two sets clear but that lead was reduced when Labanauskas pegged double ten to win the fifth set 3-1. Van Gerwen won the next three legs, including one in which his opponent had kicked off with back-to-back 180s. Labanauskas then forced a fifth leg in the seventh set but missed six darts to win it before the defending champion finally finished the job on double four. 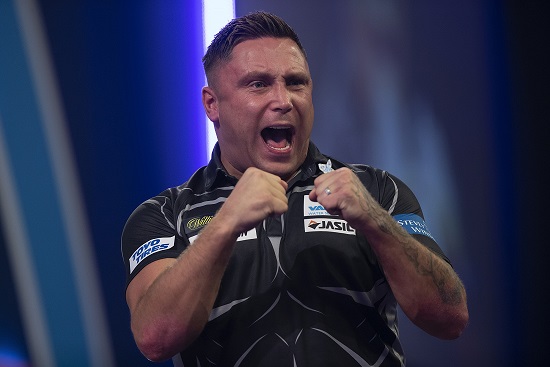 Price dominated his clash with Glen Durrant from start to finish, dropping only the third set in a convincing 5-1 success to end the Ally Pally debutant's challenge. Two-time Grand Slam champion Price averaged just under 100 and fired in eight maximums as he booked his place in the World Championship semi-finals for the first time.

"I made him chase the match and I felt in control," said Price, who will face Wright on Monday. "Glen was a bit patchy at times but I think the way I was checking out disheartened him. "I'm happy to win that game 5-1 and I think Peter will be more worried about me than I will be about him. "I'm really confident about the semi-final - he'll be lucky to win a set!"

Price defied checkouts of 105 and 126 to edge the first set 3-2 before winning the second 3-1 against the throw. Durrant won the third set 3-1 with the aid of a 136 checkout but that was to be as good as it got for the three-time Lakeside Champion as Price took the next three sets 3-1.

Wright and Aspinall both fended off mini fight-backs to progress to the last four in an entertaining afternoon session. 2014 finalist Wright produced a top quality display to defeat Luke Humphries 5-3, while Aspinall reached matched last year's debut run to the last four by defeating Dimitri Van den Bergh by the same margin. 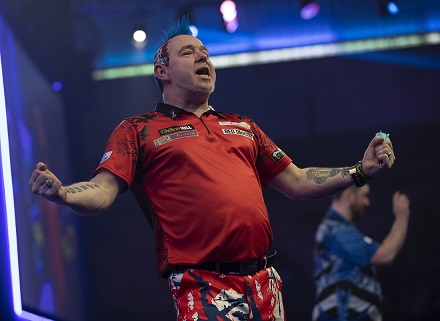 Former runner-up Wright averaged almost 106 and produced party-piece checkouts of 170 and 161 to keep a tenacious Humphries at bay.

"I wanted to go out and stay on top of him and I did that," said the number seven seed, who raced into a 4-1 lead. "Luke is an awesome player and he showed that at times but I was much more focused than in my previous games. "I played well but I need to be much more consistent to go all the way but I feel really good and when I feel this good I can win anything."

Wright dominated the early exchanges, landing the tournament's eighth 170 finish and a 124 checkout to take the opening set 3-1, before racing through the next three legs to double his lead. The Scotsman missed double 12 for a 144 out and Humphries made sure of the opportunity to get a set on the board by pinning double eight. Wright shrugged it off with another strong set, landing a stunning 161 finish as he claimed the fourth set 3-1 with winning legs of 12, 12 and 11 darts. He further extended his lead by taking set five in four legs but Humphries replied in kind before a whitewash seventh set saw him reduce Wright's advantage to 4-3. The former UK Open winner finally brought an end to a match of exceptional quality by landing double two to clinch the eighth set 3-1. 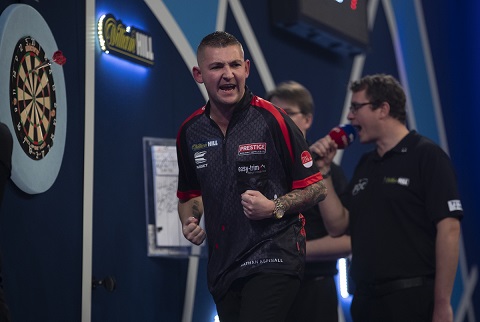 Aspinall, meanwhile, moved into the semi-finals for the second successive year after seeing off a spirited fightback from Van den Bergh. The number 12 seed also raced into a 4-1 lead before eventually winning the match in eight sets.

"He let me off in the end," admitted Aspinall, who reached the last four on his debut 12 months ago. "I don't know why I felt so nervous. It is something I need to address. The occasion got to me and I didn't play very well so I'm happy to get through. "I showed some fighting spirit at the end and took my chances. I love being here and I want to put on a show for the fans, which is what I will aim to do tomorrow."

Aspinall missed darts at doubles in each of the first three legs, allowing Van den Bergh to win the opening set 3-0. The UK Open champion hit back, though, taking the following two sets 3-1 before punishing the Belgian for missing four darts to win set four as he opened up a two-set lead. The 2019 US Darts Masters winner also edged the fifth set 3-2 but failed to close out the match in the sixth, which Van den Bergh clinched in a deciding leg. Consecutive finishes of 80 and 70 saw the two-time World Youth Champion take the seventh set 3-1 but Aspinall avoided a decider by coming back from being two legs behind in the eighth with three 13-darters.

Going into Monday's semi-finals, Van Gerwen remains the odds-on favourite and is 1/2 to lift the Sid Waddell Trophy on New Year's Day. Price is the 7/2 second-favourite, while Wright is priced at 7/1 and Aspinall is the 14/1 outsider with title sponsors William Hill.