Fallon Sherrock stunned the sporting world again as she knocked Mensur Suljovic out of the William Hill World Championship with a monumental bullseye finish on Saturday.
Four days after making history as the first woman to win a match in the sport's most prestigious tournament with her victory over Ted Evetts, Sherrock claimed another victory thanks to an incredible display of doubling at Alexandra Palace. The 25-year-old sensation converted 69 percent of her double attempts in a 3-1 triumph over Suljovic, the 11th seed, which she sealed with a 86 checkout on the bull. 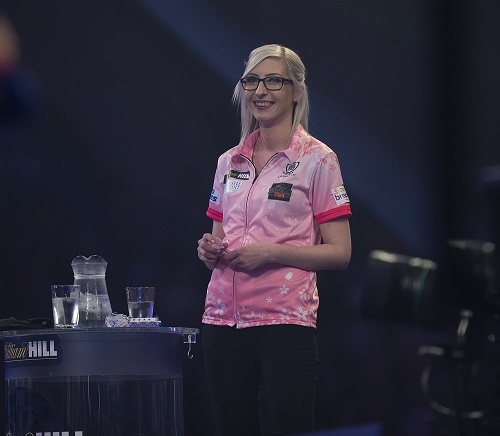 "I can't believe it," said Sherrock, who will return on Friday December 27 to take on Chris Dobey in round three. "I've knocked out one of the best players in the world and it has given me the best feeling in the world. "I was so happy when that bullseye went in. It was an amazing moment for me and I'll be jumping around when I get home. "I felt so comfortable and I really enjoyed it - I just want to get up there and play again."

Suljovic looked like he had taken control from the start when he won the first two legs but successive finishes of 81, 131 and 70 saw Sherrock steal set one. She then added checkouts of 104 and 64 to make it five legs on the spin but it was Suljovic's turn to come from behind as he won the next three legs to level the match. The Austrian took the the first two legs in the third set but Sherrock hit back again, winning the next three with the aid of an 11-darter that began with back-to-back 180s for her second time in the tournament. Suljovic took a 2-1 lead in the fourth set before Sherrock took out 68 to level and, after her opponent missed a dart at tops to force a fifth set, she punished him in style with a clinical 88 finish on the bull.

Dimitri Van den Bergh posted the highest average of the event so far as he breezed past Josh Payne in the final match of the second round. The Belgian star completed a straight sets victory with a three-dart average of 103.81, hitting three 180s and a 124 checkout in an impressive start to his campaign.

"I gave my best and I'm glad to be through," said the two-time PDC Unicorn World Youth Champion. "A couple of months ago I was really struggling but I have found some belief and I took it on stage tonight." 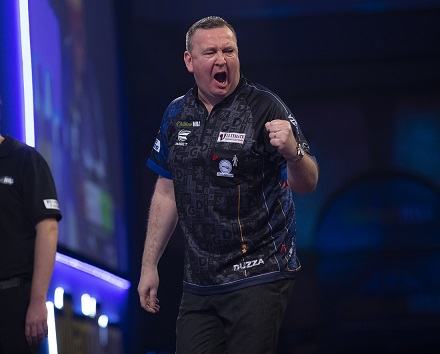 Daryl Gurney made light work of Justin Pipe as the former World Grand Prix and Players Championship Finals winner completed a 3-0 win. Pipe took the first leg with a 104 checkout but Northern Ireland's number one reeled off nine of the next ten legs to progress.

"He took out the 104 but there was no catching me after that," said Gurney. "I've been working on my throw and made a small correction which seems to have helped. "I know I'm going to be in for a real battle in the next match so I'll come back ready for that."

Gurney will take on Glen Durrant in the third round after the Alexandra Palace debutant eased past Australia's Damon Heta without losing a set. The three-time Lakeside Champion added the tournament's sixth 170 finish in a solid PDC World Championship debut.

Two-time World Champion Adrian Lewis won a thrilling battle against Spain's Cristo Reyes, coming back from two sets down to snatch victory from the jaws of defeat. Lewis narrowly missed double 12 for a nine-darter as he rallied back from the brink to move into the third round, where he will play Darren Webster. 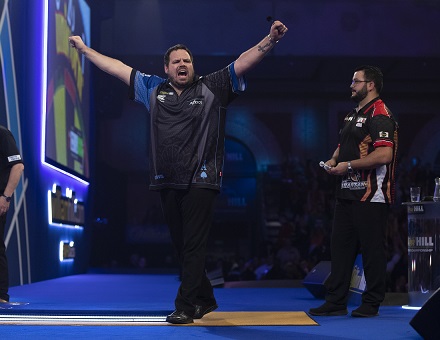 Simon Whitlock eased past Harry Ward with a straight sets success, in which the Australian number one dropped just two legs. Former World Championship finalist Whitlock will face Mervyn King in round three as he bids to reach the last 16 for the first time in six years.

"I've been practising harder than ever for this," said Whitlock, the runner-up a decade ago. "I've put in around 100 hours on the board at home in the last six weeks and I feel like that made all the difference today." 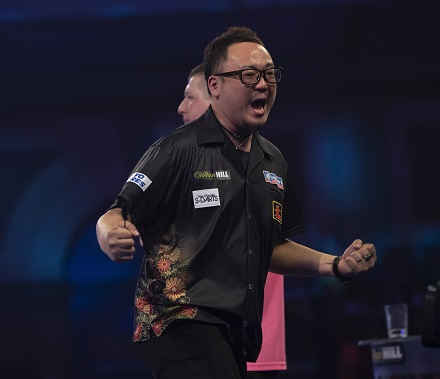 Ryan Searle's 101.54 average is currently the second highest of the 2019/20 World Championship so far as he defeated Steve West by three sets to nil. Devon darter Searle won every set 3-2 to book his place in the last 32, where he will take on two-time World Champion Gary Anderson.

Seigo Asada completed a great escape to stun Keegan Brown, who won the first seven legs of their dramatic tie before falling to a tie-break defeat against the Japanese ace. World Cup semi-finalist Asada took the final set 4-2 with a match-winning 11-darter to set up a third round meeting with Peter Wright.