Gerwyn Price defeated Brendan Dolan in a sudden death leg to win a William Hill World Darts Championship thriller on Monday, while Gary Anderson also progressed to the last 16 with a dramatic victory over Mensur Suljovic at London's Alexandra Palace. 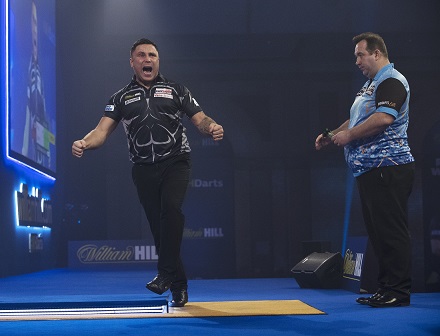 World number three Price was pushed hard by tenacious Northern Irishman Dolan but held his nerve in the decider to win 4-3, having been punished for missing a match dart in the sixth set. A high-quality encounter saw Price fire in nine 180s and land a 170 checkout as he set up a fourth round meeting with Mervyn King, who had earlier produced a brilliant performance to see off Jose de Sousa in straight sets.

"Brendan was playing really well on throw and he punished me when I missed opportunities but thankfully that last double went in," said Price. "I played well at times but not at others. One minute I was playing really well and then the next minute I couldn't hit a barn door. "Anybody left in this tournament can win it so you can't just turn up and expect to win. Brendan is a fantastic player and it was a fantastic battle." 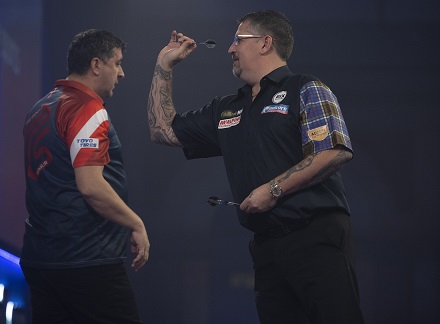 Two-time World Champion Anderson won an edgy encounter against Suljovic to move into the last 16 for the 11th successive year.
The Scot scraped past the Austrian 4-3 despite missing 33 darts at doubles during a hard-fought victory. Anderson produced a sublime 130 checkout in the first set, which he edged with a 73 finish on the bull after Suljovic had missed four darts at doubles to lead. It was Anderson's turn to squander opportunities in the second set, with eight darts going begging to double his lead before Suljovic levelled. Anderson won the third set but then lost six legs on the spin as Suljovic moved 3-2 ahead and one set away from victory. The 2015 and 2016 World Champion fought back, however, as he responded with his own run of six straight legs to book a place in the fourth round.

Anderson, who hit four ton-plus checkouts in up-and-down display, admitted he was frustrated by Suljovic's inconsistent pace of play, saying: "I nicked at the end, I don't know how. "I'm sure there are 90 percent of folk watching at home, they probably turned over and watched Corrie or something - I would have done. I just want to throw darts and if you get spanked, the boy's been better than you and beaten you." 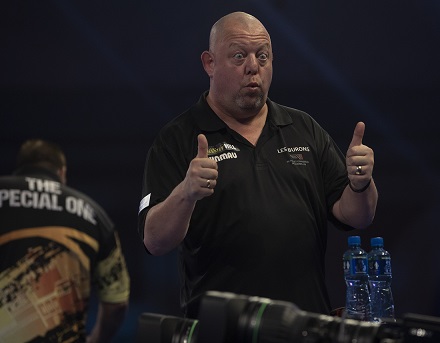 King produced an eye-catching display to see off Grand Slam champion De Sousa in straight sets in Monday's opening match.
Both men averaged more than 103 but eight maximums and a relentless display of finishing saw King progress to the last 16 for the first time since the 2014 World Championship. The 2009 Ally Pally semi-finalist finished 78 to take the opening set 3-1 after his opponent missed key doubles. Last month's Players Championship Finals runner-up then raced through the second set with three straight legs and a set average of 118.66. He then edged the third set in a deciding leg before going 2-0 ahead in the fourth by capitalising on a miscount by De Sousa, who hit double top when he needed the bullseye, and went on to take the set 3-1 to complete victory.

"He didn't hit big at the right time and I took advantage," said King. "I take each game as it comes and if I play well I win and, if not, I won't. That's the way I've always approached it. "I'm a lot more confident than I have been because of the way I'm playing. There's no reason that I can't go on and win this." 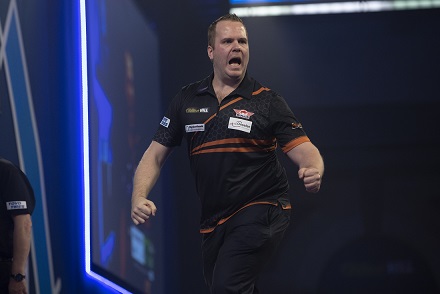 World Grand Prix finalist Dirk van Duijvenbode moved into the last 16 with a 4-0 success over Adam Hunt, who hit nine 180s in defeat to the emerging Dutch talent.
Van Duijvenbode followed up his second round triumph over former World Champion Rob Cross with another excellent display, averaging 104.09 as he eased into round four. Hunt took out 145 in the opening leg but that was superseded by a stunning 170 finish from Van Duijvenbode, who went on the clinch the first set 3-2 with a 12-dart leg. The Dutchman finished 120 to win the second set 3-1 after Hunt had missed a dart at the bull to take out 170 himself. Legs of 12 and 14 darts saw Hunt go two legs clear in the following set but Van Duijvenbode hit back with 13, 11 and 15 dart legs to move three sets clear. The World Grand Prix runner-up then won the fourth set 3-1 to move into the last 16, where he will take on Glen Durrant, who defeated USA's Danny Baggish in six sets. 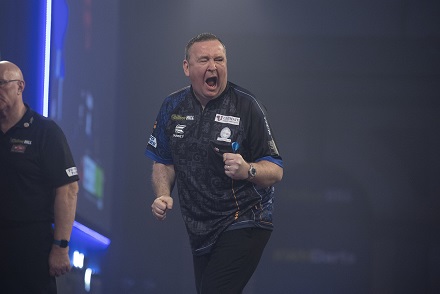 Premier League champion Durrant won the first set 3-0 and edged the second 3-2 to double his lead.
A 117 checkout helped him take set three 3-1 but Baggish fought back, winning each of the next two sets as he threatened a fightback. It would prove to be nothing more than a stay of execution for the 2019 North American Darts Championship winner, however, as Durrant clinched the sixth set in a decider to progress.

"I was very close to a four-nil win there and I was struggling in the end. That's a big win," said Durrant. "I feel like there is not a lot of interest in me this year and it feels great. I'm happy to be the forgotten man and go under the radar. "I feel like I've played better and it gives me a little bit of confidence to take into the game against Dirk, which I'm really looking forward to." 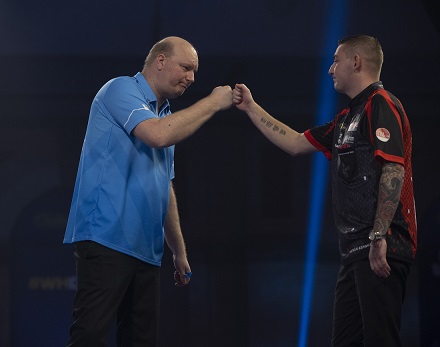 Vincent van der Voort defeated two-time semi-finalist Nathan Aspinall to progress past the last 16 for the first time in five years.
The quickfire Dutchman made a flying start to the match, taking the first two sets without dropping a leg and produced checkouts of 121, 113 and 110 in a reasonably comfortable win. Van der Voort averaged 115.63 as he won the opening set in less than five minutes, going on to win the first six legs of the match without reply to open up a two-set lead. An 81 checkout saw Aspinall clinch the third set 3-1 before winning the fourth in five legs to level the tie. The former UK Open champion missed darts to win each of the first two legs in the fifth set, and Van der Voort capitalised before going on to take the set 3-1. A 74 finish to break throw set the Dutchman on his way to finishing the job, which he duly did by pinning double 16 to reach the last 16.

"I don't think I played that well but I knew he was struggling and I'll take the win," said Van der Voort. "I was very good at the beginning of the match and maybe that did the damage."