Michael van Gerwen and Krzysztof Ratajski reached the quarter-finals of William Hill World Darts Championship by winning in a sudden-death leg on Tuesday, while James Wade hit a nine-darter in defeat on a drama-filled day at London's Alexandra Palace.

Three-time World Champion Van Gerwen recovered from falling 3-1 behind to an exceptional Joe Cullen, who fired in 19 180s and missed two match darts at the bullseye in a breath-taking affair. That came after Ratajski had created history in becoming the first Polish player to win through to the World Championship quarter-finals after coming through another seven-set thriller against Germany's Gabriel Clemens.
An action-packed double session at Alexandra Palace had earlier seen the third round conclude with the final four matches, which included Wade landing the first nine-darter in the event for five years, only to go down to Stephen Bunting. 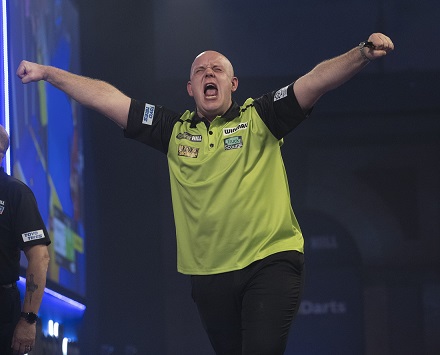 However, it was Van Gerwen and Cullen who stole the show in the day's last of six contests as the pair produced arguably the most memorable game of the past year.
The world number one averaged over 100 in a breathless match which included 37 scores of over 170, as an opening 180 in the final leg proved to be pivotal for the Dutch ace when Cullen failed to find a treble in the decider.

"I knew I needed to open big in the last leg and that was very important," said Van Gerwen. "That was a brilliant game and the adrenaline was pumping. "Joe had the chance to beat me and his scoring power was phenomenal. I had to keep up with it, which wasn't easy so I'm really glad I'm through. "It's horrible for Joe but I have been in that position so many times and it makes you stronger. I wish him all the best because he is a phenomenal guy and a phenomenal player but I am so glad I won this one."

Cullen punished his opponent for two missed darts in the fifth leg of set one to grab an early advantage, before missing a dart to double his lead as Van Gerwen capitalised to level. The Yorkshireman continued to pile in the maximums and went back in front by taking the third set, again in a fifth leg decider. He then landed a sublime 123 checkout on the bull which set him on his way to opening up a two-set lead as he took out 85 after Van Gerwen had squandered three darts for a level game. The three-time World Champion clawed a set back before surviving a match dart when Cullen narrowly missed the bullseye for a 90 checkout, allowing Van Gerwen to force a seventh set.
The Dutchman wired double top for a 120 checkout to lead 2-1 in the decider but Cullen landed double eight to again move within a leg of glory. He missed a second dart at the bull for the match - this time at the end of 164 combination - and Van Gerwen pinned double eight to take it to a sudden-death leg. Van Gerwen open with a 180 and Cullen failed to find a treble in the leg, which the world number one won on double eight with a 14-darter. 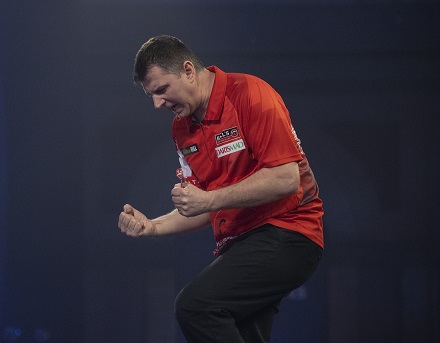 Ratajski also reached the quarter-finals after winning a seven-set duel against Germany's Gabriel Clemens in an incredibly dramatic last-leg shoot-out.
Like in Van Gerwen's triumph, 34 of a possible 35 legs were played in a marathon battle, which was sent into a nail-biting sudden-death leg after Ratajski missed two darts at double 16 to win the final set 3-1. With the match tied at three sets and two legs apiece, both players missed seven match darts in the deciding leg before Ratajski landed double one to win a tense tie.

"It was so emotional. I don't remember ever having a match like this before," said Ratajski who became the first Polish player to reach a World Championship quarter-final. "The last leg was terrible. It was crazy. I usually lose close matches but today I was lucky." 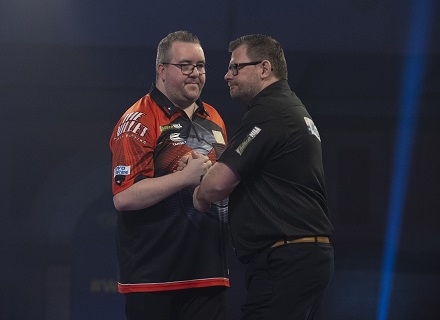 Bunting was one of four players to reach the last 16 after he came back from two sets behind to seal a 4-2 success against Wade, who landed his third televised nine-dart finish but eventually lost out.
Wade edged the opening set 3-2 with a clinical 62 checkout after Bunting had missed two darts to lead. Three-time semi-finalist Wade punished his opponent for more missed doubles as he pinned double top twice to take out 80 for the second set. Bunting bounced back by taking the third set 3-1, before sealing the fourth by the same margin with an 81 finish to level up the tie. Wade's nine-darter came in the second leg of set five, as he landed back-to-back 180s and a 141 checkout to make it one apiece - becoming the first player since Gary Anderson in 2015/16 to achieve perfection - but he went on to lose the set as Bunting hit the front once again. The Merseyside man went on to seal victory by winning the sixth set in a deciding leg to earn a place in the last 16, where he will take on Ryan Searle.

"I can't believe it - I've worked so hard over the last few months. Everybody knows I've had Covid but I've put that behind me now," said Bunting, who had to withdraw from the World Grand Prix after returning a positive coronavirus test. "When he hit the nine-darter it was probably one of the rare moments where it was better for me that the fans weren't here as they would've all been buzzing after that and supporting James. "I miss the fans dearly though and we all want them back. I feel like I'm playing the best darts of my life and I'm looking forward to the game against Ryan." Reflecting on the defeat, a disappointed Wade said: "It's a great achievement to hit the nine-darter but ultimately it's only one leg. It's a nice moment but obviously to go on and lose the match is a massive disappointment for me." 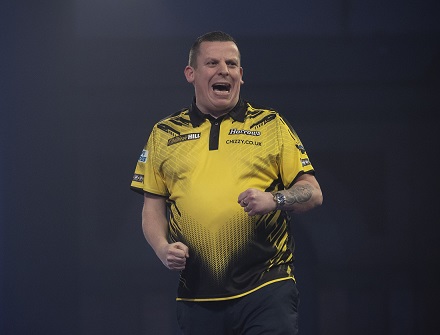 Dave Chisnall recovered from dropping the first two sets against Danny Noppert by winning the next four to advance to the last 16.
Noppert won the first six legs of the match in a dominant start, opening up a two-set lead with back-to-back 120 checkouts. Chisnall began his comeback by winning the third set in three legs before taking each of the following two sets 3-1, as Noppert landed a 160 finish in vain. World number eight Chisnall then raced through set six without reply to set up a fourth round meeting with World Matchplay champion Dimitri Van den Bergh.

"I wasn't worried after the first two sets. I can be a slow starter at times," admitted Chisnall. "I lost the first six legs but it was only two sets. I knew I could come back and I did. "I know I have got the game but if I give Dimitri a head start, he'll punish me. He's playing well and having big averages but I'll be ready for it." 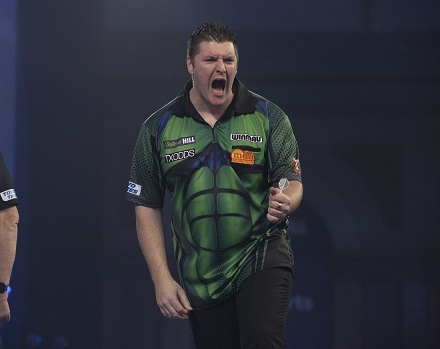 Daryl Gurney progressed to round four after an impressive 4-1 victory over Chris Dobey, in which the former World Grand Prix and Players Championship Finals winner averaged an eye-catching 101.39.
The first set went with the throw as Gurney edged ahead, before breaking with a brilliant 11-darter to take the second set 3-1. It soon became 3-0 but a 97 checkout helped Dobey pull a set back, only for Gurney take out 78 twice in the fifth set to complete a comfortable success.

"The real Daryl Gurney turned up," said Gurney, who will meet Vincent van der Voort on Wednesday. "Chris played well but I stuck in there. "I broke him at a great time in the second set and played well enough to win the game. I'm full of belief now - I've been practicing so well but in previous tournaments I've been letting myself down. "I was rubbish throughout this year but I knew I could turn it around at the biggest tournament of the year. From being absolutely rubbish, this could turn into a decent year. "Vincent beat me in the World Matchplay, it's time for revenge." 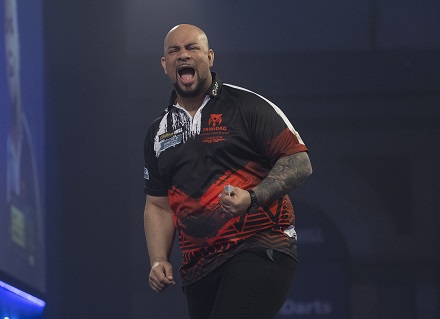 Devon Petersen set up an exciting encounter with Anderson after claiming a straight sets success against Jason Lowe, who saw his impressive debut year on the professional circuit end in the last 32. Petersen landed nine 180s in an improved performance from his second victory over Steve Lennon, which included a 160 finish as he punished Lowe for missed darts to win the second and fourth sets.

"My performance was better than the first round and my finishing pushed me through," said Petersen. "I've worked a lot on the technical side of my game but also on the mental side. I have people like Wayne Mardle, Colin Lloyd and Phil Taylor in my corner and they have helped me massively. Wayne has been influential in improving my technique. "I'm looking forward to playing Gary. I'm hoping to up my performance and I feel quite confident."