Michael van Gerwen laid down a marker with an eye-catching victory over Ryan Murray as the Dutchman began his quest for a fourth World Championship title at London's Alexandra Palace on Saturday. 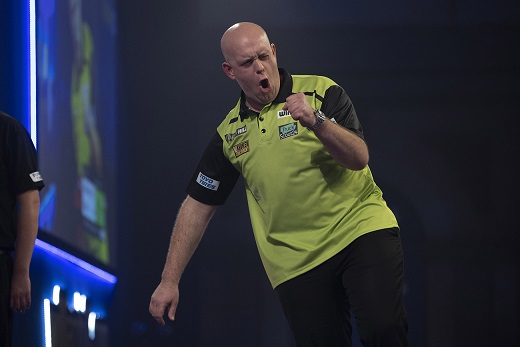 Van Gerwen produced the performance of the tournament so far, averaging 108.98 in a 3-1 defeat of Scotland's Murray in round two of the William Hill World Darts Championship. Despite the high average, the world number one didn't have it all his own way as an impressive Murray missed a dart to take the contest to a deciding set having kept pace with Van Gerwen in spells.

"I played a phenomenal game when I had to, I'm happy with how I played tonight," said Van Gerwen. "Ryan played a great performance for his first time in the tournament. I couldn't give him a chance because the way he was playing he would've taken it. "I had to pull out a great performance and I'm really glad I did. It took some doing but my scoring power was there constantly. "I missed a few doubles but I can't really complain, it was a good performance. "I'm feeling good about myself at the moment, the confidence is back and I feel ready to take on this tournament.

Van Gerwen stormed through the opening set without losing a leg, but a solid set of darts from Murray saw him level the contest with a last dart in hand double 18. A 113.31 average in set three from Van Gerwen saw him restore his lead, but once again Murray found a way to stay in touch in set four. However, after he missed a dart at double ten to force a deciding set, Van Gerwen clinically took out 76 in two darts to book his place in round three where Ricky Evans or Mickey Mansell awaits. 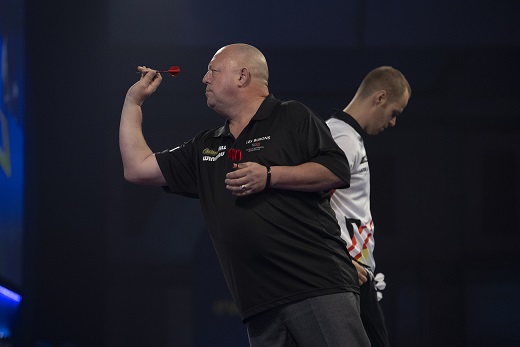 Mervyn King joins Van Gerwen in the third round as he continued his excellent recent form with a 3-1 victory over Germany's Max Hopp.
King averaged 110 in the first set and didn't allow his opponent a dart at a double before going on to claim a comfortable win. Last month's Players Championship Finals runner-up landed five 180s and averaged almost 100 as he set up a tie with Grand Slam champion Jose de Sousa.

"I'm happy with how I played it felt good throughout," said King. "I felt comfortable and probably could have won it a little more easily but I'm more than happy with that. "I'm not far away from playing my best game and if I can do that then there is no reason why I can't have a good run in this tournament." 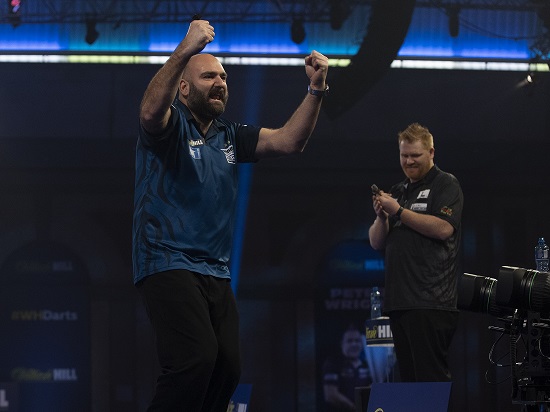 The fifth day of the 2.5m pound tournament also saw six round one matches also take place, with Scott Waites and Kim Huybrechts among the eye-catching performers.
Two-time Lakeside Champion Waites edged one of the most exciting matches of the tournament so far as he and Canada's Matt Campbell played out all 25 legs in an Ally Pally classic.
Former Grand Slam of Darts winner Waites came from two legs down to prevail in a dramatic deciding set on his debut. Campbell clinched a high-scoring opening set, which included five 180s, thanks to a sublime 160 checkout in the fifth leg. Waites levelled before coming from a set behind again to force the decider, in which a brilliant 152 finish gave his opponent a two leg lead. The Yorkshireman refused to be denied, however, winning the following two legs to secure a last-leg shoot-out which he won with a fabulous 11-darter, finishing 81 to move into round two.

"After playing 24 legs to get to that point I was determined not to lose," said Waites, who will meet Nathan Aspinall in round two. "I've played one of the best games ever and only just managed to get over the line. I have to give credit to Matt for that. I feel sorry for him having to go back to Canada but what a player. "On my day I can give anybody a game and I think I can take Nathan all the way. "As a Yorkshireman I like to get my money's worth and I think everybody watching at home got their money's worth today."

Former quarter-finalist Huybrechts posted the second highest average of the tournament so far as he raced to victory against China's Di Zhuang. The Belgian number two averaged 104.05, landed five 180s and won nine consecutive legs without reply to cruise into the second round, where he will face Ian White.

"I'm happy with my performance. I had to focus on myself because I didn't know what to expect from my opponent," said Huybrechts. "I didn't underestimate him and it showed in my performances. I've worked really hard this year and it paid off today. "I don't think I've ever been more ready for a World Championship so I hope I can keep my focus and keep playing like this." 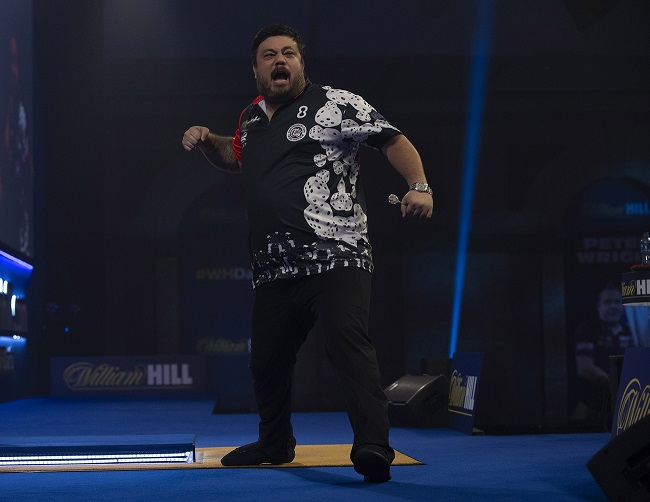 America's Danny Baggish survived six match darts as he overcame in-form Australian Damon Heta in a five-set thriller. On his second Alexandra Palace Baggish recovered from 2-0 down in the opening set with three successive legs, the last of which ended with a 113 checkout.
Baggish showed nerves of steel to take out 76 in the set two decider and move to the brink of an upset, but Heta rallied with checkouts of 146, 81 and 160 to halve the deficit. Heta landed his fourth three-figure checkout, this time a 100 to wrap up the fourth set 3-0 and take the match the distance. An incredible deciding set saw Heta squander six match darts to complete an epic comeback, allowing Baggish to claim one of the biggest victories of his career.

61-year-old Deta Hedman's debut at Alexandra Palace ended with a 3-1 loss to Andy Boulton.
After Hedman missed six darts for the opening leg, Boulton reeled off six successive legs and looked to be strolling to victory. Hedman rallied and took the third set without losing a leg, but Boulton re-found his form to win the final three legs and book his place in round two where Stephen bunting awaits. 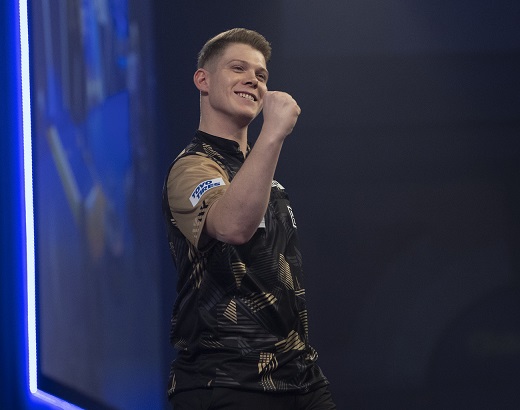 Ireland's Steve Lennon eased into the second round with a 3-1 victory over Sweden's Daniel Larsson. The former World Cup of Darts finalist dominated the match for long spells, winning six of the first eight legs to take a two set lead. Larsson took the third set but Lennon refused to be drawn into a battle as a brilliant ten-darter helped him win what proved to be the final set without dropping a leg.

Nico Kurz set up an all-German second round clash with Gabriel Clemens after the 23-year-old overcame former World Championship runner-up Andy Hamilton. After the opening two sets were shared, Kurz then won six of the next eight legs to come out on the right side of the battle.