Gerwyn Price survived a scare in the second round of the William Hill World Darts Championship but overcame a gutsy performance from Jamie Lewis by winning in a deciding set on Monday.

Former semi-finalist Lewis got himself in a promising position against the world number three as he aimed to continue his revival with a second win on the Alexandra Palace stage in this year's event. However, the qualifier was punished for a costly burst score of 68 in the final set as Price capitalised with some deadly finishing. Price, who won the World Grand Prix, World Series Finals and World Cup of Darts in 2020, landed crucial checkouts of 72 and 116 in the final set to move into third round. 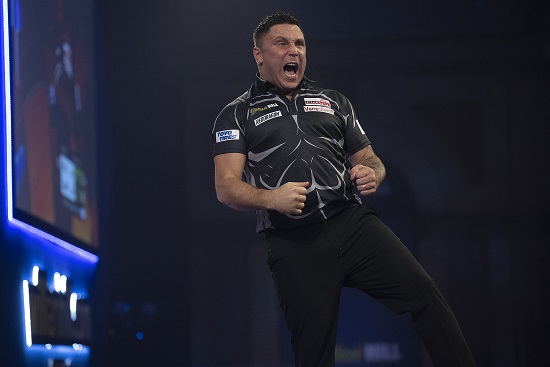 "That wasn't my greatest performance and I probably got a bit lucky in that last set," said Price, who also took out 160 in the triumph. "I couldn't get going for whatever reason and he let me in when he bust 68, but I did what I do and took advantage. "It's not a brilliant start but I have to give credit to Jamie. He gave me a good game and I feel like I can grow into this tournament."

Price suffered a slow start to the tie as his Welsh compatriot claimed the first set 3-1 before adding a fourth straight leg with an 88 checkout to take the lead in set two. Price began to improve, winning the next four legs, including a 104 finish, and went on to take the lead with a 160 checkout. Lewis forced a deciding set by winning the next three legs but squandered his chance to lead in the fifth set's opener, bursting 68 by following a single 20 with treble 16 instead of a single. Price stepped in and applied maximum punishment as he reeled off three straight legs to complete victory. 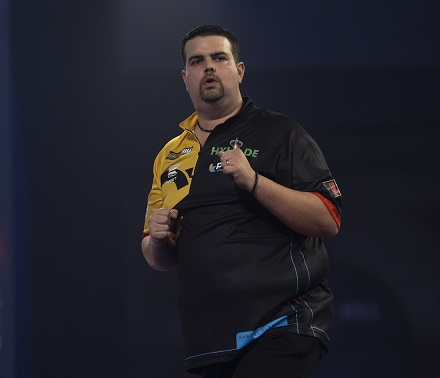 Gabriel Clemens won the World Championship's first ever all-German encounter as he defeated emerging talent Nico Kurz by three sets to one. Clemens defied four ton-plus checkouts from his countryman, including stunning finishes of 160 and 161, to set up a third round tie with reigning champion Peter Wright. It was Clemens who hit the first of the game's six three-figure checkouts as he took out 100 in the opening leg, before claiming the first set 3-2. The 23-year-old hit back with consecutive finishes of 160, 123 and 161 to win a sensational second set 3-1, but Clemens was soon back ahead after winning set three by a two-leg margin. The former German Darts Masters finalist kicked off the fourth set with a 108 checkout and didn't look back, wrapping up the set 3-1 and winning the match by the same scoreline. 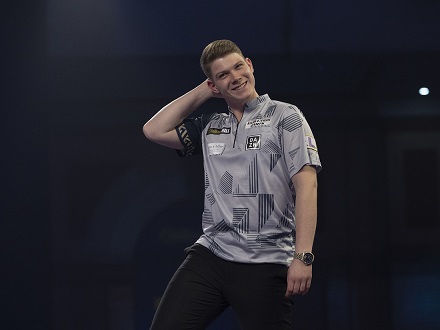 "I'm very happy. That was a difficult game for me so I'm really pleased with how well I did," said Clemens. "Nico is one of the most talented players in Germany and he showed it tonight. His finishing was amazing. "I am good friends with Nico this was a special match for both of us and for our country. I know lots of fans were watching on television back home and I'm sure they enjoyed this game."

Kim Huybrechts continued his resurgence with a brilliant victory over world number ten Ian White in a match which saw both players average in three figures. White actually posted the highest average of the pair with 102.35, but couldn't stop the Belgian star claiming a 3-1 success. Huybrechts continually punished his opponent for missed darts at doubles as he set up a last 32 meeting with Ryan Searle. 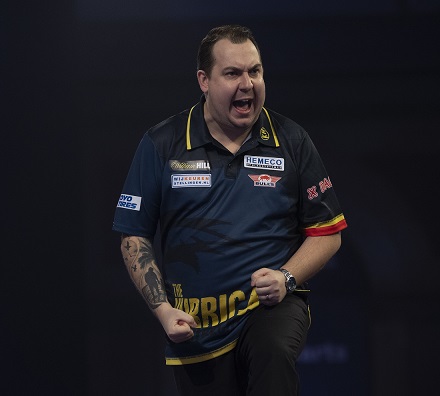 The former World Cup of Darts finalist countered White's early 127 checkout with a 121 finish of his own en route to taking the first set 3-1. He then edged the second set 3-2 after White blew three darts in the deciding leg, having come from 2-0 down to give himself a chance to level. The Stoke ace did manage to find a way back into the match as a 105 checkout helped White to win the third set 3-1. Huybrechts, though, sealed victory in the following set by landing a 13-darter in the deciding leg to move through to the post-Christmas action.

"I'm over the moon after beating one of the best players in the world," said Huybrechts. "Ian is an amazing player and he played well so I'm so happy with this win. I've been putting so much hard work in and it is paying off big time. "I feel amazing after this and am not even thinking about the next match yet. I've put everything into this win but I will rest, practice and come back even better after Christmas." 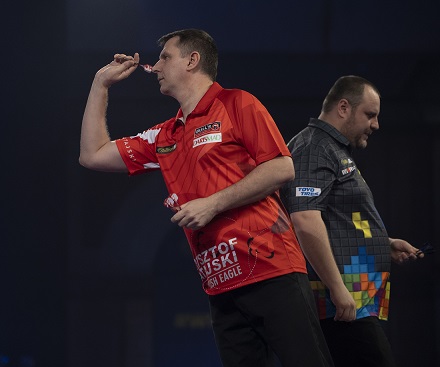 Krzysztof Ratajski put on an excellent display to race past Ryan Joyce in straight sets, averaging over 100 in the process. Ratajski took out 91 to win the decisive fifth leg in the first set before edging the second set 3-2 with a classy 11-darter. He went on to win the third set 3-1 to book his place in round three, which gets underway on Sunday December 27.

"I'm very happy to win. It's really to be hard to be here over Christmas because I would rather be with my family, but I would rather be here after winning than after losing," said Ratajski, who will remain in London during the Christmas break due to travel restrictions. "I played very well for two sets but I was a little bit nervous in the last set so I'm really happy to get the win. "I think I can go far in this tournament if I play my best game and this is a very good start."