Former winners Rob Cross and Adrian Lewis were knocked out of the William Hill World Darts Championship on a dramatic day eight at London's Alexandra Palace on Tuesday.
Cross was beaten in a five-set thriller by Dirk van Duijvenbode, who held his nerve to win a last-leg shoot-out, while Lewis was stunned by American qualifier Danny Baggish.
Dimitri Van den Bergh made a strong start to his campaign in the 2.5 million pound tournament with a 3-0 victory over Paul Lim, while Simon Whitlock, Devon Petersen, Joe Cullen, Brendan Dolan and Danny Noppert also progressed to the third round. 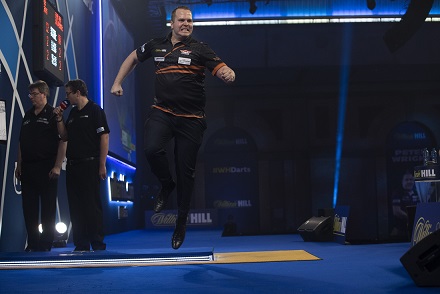 Van Duijvenbode took out a gutsy 99 finish to break number five seed Cross in the deciding leg of the fifth and final set to move into the third round after a tense tussle.
Cross, who famously lifted the Sid Waddell Trophy at his first attempt in 2018, put himself in a strong position by taking two of the first three sets. 2020 World Grand Prix finalist Van Duijvenbode won the fourth set without dropping a leg, just like he had in set two, forcing the dramatic decider. The animated Dutchman landed two double eights to earn what was effectively a sudden death leg in which he hit seven treble 19s, including one in his match-winning 99 combination when Cross was waiting on a double.

"I felt so good on treble 19 in that last leg and I knew I had a good chance to take out that finish but I also knew I had to," said Van Duijvenbode, who sealed glory with a 12-darter. "It's a big moment in a way but I want to go much further. I want to reach at least the quarter-finals. I don't see why I can't do that now." 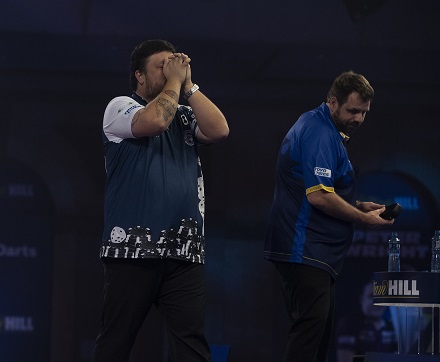 Baggish, meanwhile, followed up his first round win against much-fancied Australian Damon Heta by punishing Lewis for a slow start to their match to set up a third round clash with Glen Durrant.
2011 and 2012 World Champion Lewis missed 15 darts at doubles in the opening two sets, winning only one leg as his opponent opened up a comfortable lead. Lewis threatened to fight back when finishes of 84 and 127 helped him halve the deficit, but the first 170 finish of this year's event and a pivotal 91 checkout to break saw Baggish go on to complete the giant-killing.

"I'm so happy. That is a special win for me," said Baggish, who was competing the day after his brother, Harrison, had suffered a severe stroke at home in Florida. "That was for my brother. I'm really emotional and that's why I let it all out at the end. It's been a difficult and emotional 24 hours but I am doing him proud and that means everything. "People have written me off before both games but I will keep showing them what I can do." 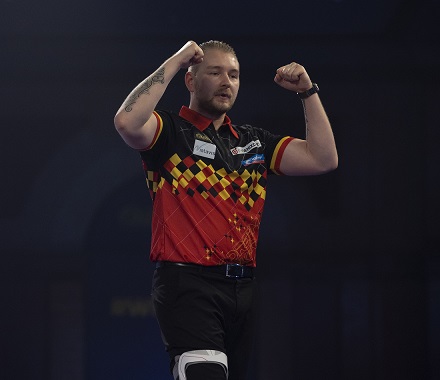 Van den Bergh produced a classy display to earn a straight sets triumph against World Championship legend Lim. The 2020 World Matchplay winner averaged over 105, hit six 180s and took out a 121 checkout in a comfortable victory.

"I think I showed what I am capable of and I'm happy I was able to be at the top of my game," said the Belgian. "I knew I couldn't give Paul a chance and I didn't. I feel like I am coming here as one of the best players in the world after winning in the World Matchplay and I think my performance proved that I am."

Whitlock produced an excellent performance to win a thrilling encounter with Lithuania's Darius Labanauskas in five sets.
The Australian ace kicked off his campaign with a fantastic all-round display, which included ten 180s and an average of 101.21 for the 2010 runner-up. It could have been a more comfortable victory for Whitlock when he left double 18 for the match when leading by two sets to one, but Labanauskas landed an astonishing 164 checkout to force a deciding set. Whitlock responded brilliantly as a superb ten-darter sparked a run of three successive legs to seal an impressive triumph. 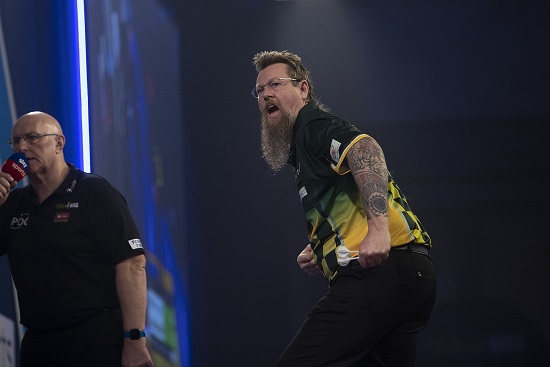 "I've been playing well this year, particularly in the TV events. I'm not going to get ahead of myself but I'm feeling really good," said Whitlock who has enjoyed three televised victories against world number one Michael van Gerwen in 2020. "I've had three wins over the best player in the world in major tournaments this year so everybody knows my game is there. "Darius is a fantastic player. I knew I had to play my best darts to beat him and I was able to play some fantastic darts to get the job done."

South Africa's Petersen moved into the last 32 after winning a jittery encounter against Steve Lennon, with the pair missing 72 darts at doubles between them. 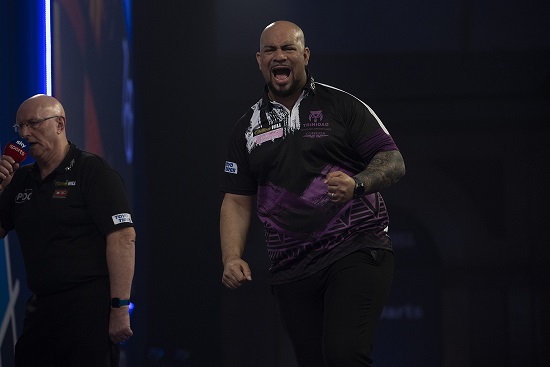 Petersen hit three maximums and took out a 106 finish in the opening set, which he edged 3-2 after Lennon missed nine darts at doubles in the deciding leg. The Irishman went on to miss two darts to win the second set, allowing Petersen to again capitalise in the fifth leg. The third set also reached a fifth leg decider after Petersen missed four darts in leg four before going on to miss three more match darts in the last leg, as Lennon finally claimed a set. Petersen, though, found his finishing prowess in set four with successive checkouts of 121, 105 and 60 to seal victory.

"It was a strange game but I am happy to do the business and happy to get the win," said Petersen, who landed seven 180s. "I was happy with my scoring but I have to go away and work on my finishing because I was not happy at all with that aspect of my game. "It's all a learning curve me and I have learned some lessons tonight that I can put into practice for when I return after Christmas."

Cullen put some of his World Championship woes behind him by reaching round three for the first time with a comfortable win over Wayne Jones.
Cullen, a winner of two European Tour titles, hit six 180s in a dominant straight sets success over 2006 semi-finalist Jones. The Yorkshireman breezed through a routine first set, winning three legs without reply, before doubling his lead after edging set two in a fifth-leg decider. Cullen then charged over the line, sealing the third set 3-1 with a 68 checkout to set up a last 32 meeting with Welsh World Cup winner Jonny Clayton. 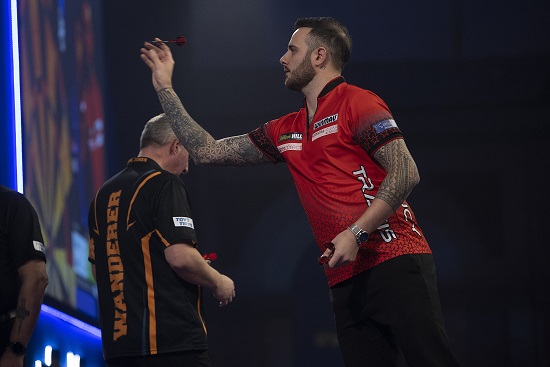 "I've struggled here in the past and I've done everything I can to make sure that didn't happen again today," said Cullen, after winning for just the third time on the Alexandra Palace stage. "I've been putting the work in on the practice board. I feel more prepared than ever for this and I think it showed in my performance. "I've been playing well for the last few months and I'm looking forward to the game against Jonny. He's a good friend but there are no friends on the stage and I'll be coming back after Christmas to do a job."

Dolan booked his place in the third round after ending Edward Foulkes' fairy tale at Alexandra Palace. Dolan raced through the first set with a 104.86 average, throwing notably quicker than usual as he won three legs on the spin to take the lead with the aid of a 105 checkout. Foulkes held his nerve in the following set, edging a last-leg decider to level the tie on double ten. The Japanese qualifier missed a dart to take the third set to a fifth leg, allowing Dolan to regain his lead by taking the set 3-1. The former World Grand Prix finalist then finished the job with a 3-0 success in the fourth set, teeing up a post-Christmas meeting with world number three Gerwyn Price.

Danny Noppert won a nervy affair against South African qualifier Cameron Carolissen to advance to round three. The Dutchman was caught cold in the early stages of a tense encounter but recovered from losing the first five legs to prevail 3-1 over World Championship debutant Carolissen, who had received a bye to the second round due to Martijn Kleermaker's positive Covid-19 test result.