Michael Smith suffered a shock defeat at the hands of William Hill World Championship debutant Jason Lowe, while Gary Anderson's bid to lift the Sid Waddell Trophy for a third time began with a comfortable win over Madars Razma at London's Alexandra Palace on Wednesday.
The final day of pre-Christmas action also saw two-time semi-finalist Nathan Aspinall survive an almighty scare in a thriller against Scott Waites as the second round drew to a close in dramatic fashion.

World number four Smith became the highest seed to lose their opening tie when Lowe produced an excellent display earn a 3-1 victory. The 48-year-old builder from Cradley Heath, who won his PDC Tour Card at Qualifying School at the start of 2020, hit seven 180s and averaged over 96 in an impressive triumph. 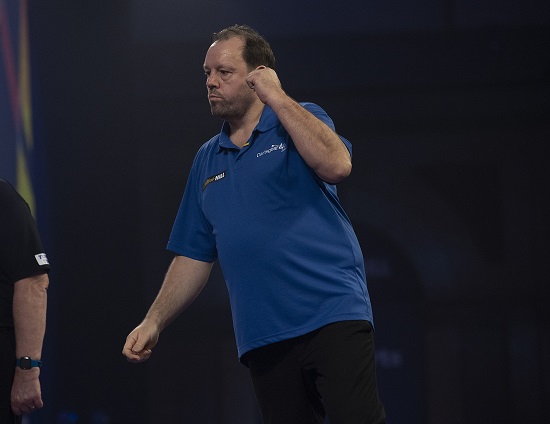 "This is the biggest win of my career and it feels amazing to do it at this tournament against one of the best players in the world," said Lowe, who had beaten Dmitriy Gorbunov in the first round. "There was absolutely no pressure on me and that's what enabled me to play well. I think Michael put himself under pressure and I just played darts. "I'm doing okay for my first year as a professional but I don't really consider myself as one. If I can keep this attitude then I can be a problem for the big players."

Lowe enjoyed a dominant start to the tie, winning the first six legs, before Smith won the third set by taking out 74 with his opponent waiting on a double for the match. That was as close as the St Helens star got to turning things around as Lowe expertly took out 101 to win the fourth set 3-0 and condemn Smith to an early exit for a second successive year. 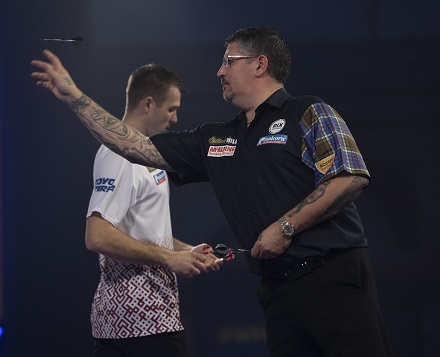 Anderson averaged 97 in a 3-1 success over Latvian talent Razma to maintain a perfect record of winning his opening match at Alexandra Palace.
The 2015 and 2016 winner overcame a shaky first leg with back-to-back 14-darters as he claimed the first set without reply, before Razma landed a pair of 13-dart finishes in taking the second by a 3-1 margin. Anderson came from a leg down to win the third set 3-1, taking out 101 for a 12-darter, before firing in a 161 finish in the fourth as he edged a deciding leg on tops to confirm his last 32 spot.

"I'm seeing anything this year as a bonus so that's exactly how I'm looking at that win," said Anderson, who has been hampered by a knee injury in recent months. "This year has been a bit of write-off in many ways so I'm nice and relaxed for this tournament and playing with no pressure at all. "Others have been working and practising really hard for it, but not me. If I play okay then who knows what will happen here but next year I'm going to knuckle down and put the hard yards in." 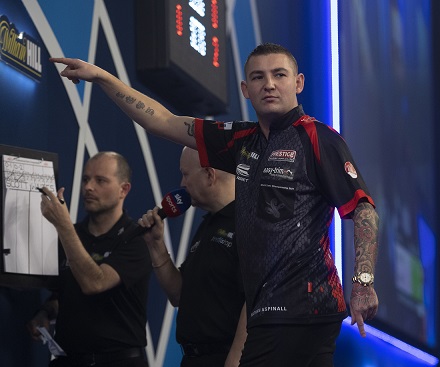 Aspinall survived four match darts and recovered a two-set deficit to win a dramatic duel against Scott Waites 3-2.
Former Grand Slam of Darts winner Waites got off to a sublime start as he averaged over 108 in taking the opening set 3-1. Aspinall responded with a 160 checkout but it wasn't enough to stop his opponent edging the second set 3-2 to leave the world number six on the brink of elimination. The third set went Aspinall's way before a 104 checkout helped him take the fourth 3-1 to set up what proved to be an incredible decider. The former UK Open champion took out a brilliant 150 finish with Waites waiting on 48, only to see the Yorkshireman win the next leg and then produce a stunning bull-25-bull checkout of 125 to lead 2-1. Waites then missed four match darts, which were duly punished by Aspinall to take the game to a last-leg shoot-out, which the Stockport ace won with ease to complete a remarkable comeback.

"That was a tough game to play in. He was fantastic and that put pressure on my from the start but I never gave in," said Aspinall. "I managed to put the pressure back on to him and, luckily for me, he missed opportunities and I got the result. "Sometimes you need a game like that. I can kick on now. Thing happen for a reason and maybe I'll be World Champion." 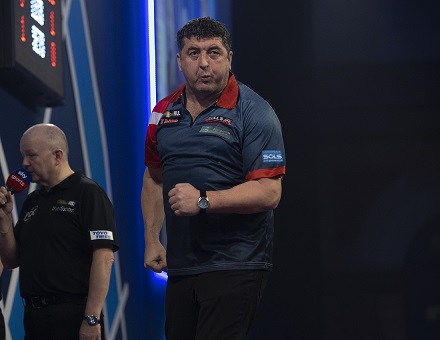 Mensur Suljovic progressed to the last 32 after the animated Austrian averaged over 98 in a 3-1 defeat of Matthew Edgar.
Suljovic raced through the first set without allowing his opponent any darts at doubles but Edgar edged the second set 3-2, thanks to finishes of 108, 68 and 64. Former Champions League winner Suljovic won another set 3-0 before a brilliant 140 checkout helped him seal the fourth 3-1 to complete an impressive win.

"Today was a good performance from me because this has never been a good tournament for me," said Suljovic, who will take on Anderson in round three. "This year has not been good for me. It has been really hard. Even my son told me that I am not focused enough and that my career might be finished but I promised him that I would give it my best for the next five years. "I'm looking forward to playing Gary next. He's a fantastic player and a gentleman. I will practice every day over Christmas to be ready for that match." 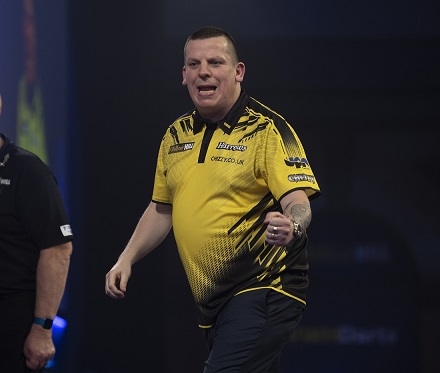 Dave Chisnall recovered from losing the first set of his opening match to defeat Keegan Brown 3-1 in a win that included a 144 checkout and an average of 97.35.
Two-time Ally Pally quarter-finalist Chisnall missed a dart at double 11 to take the first set, allowing Brown to capitalise by pinning double ten to take the lead. Chisnall then punished Brown for missing a dart to double his advantage before sealing the third set with a fabulous 144 finish. Former World Youth Champion Brown squandered the chance to force a deciding set when he led 2-1 in the fourth set, as Chisnall took out 93 before completing the win on double 12.

"Keegan is a tough opponent so I'm really pleased to get through that with a win," said Chisnall who will take on Danny Noppert after Christmas. "I was hurt by losing that first set so I was determined to hit back and I came back well. I've watched a lot of the event and results have shown that no match is easy. "I've played Danny Noppert many times and I know he is dangerous so I will have put in a good performance." 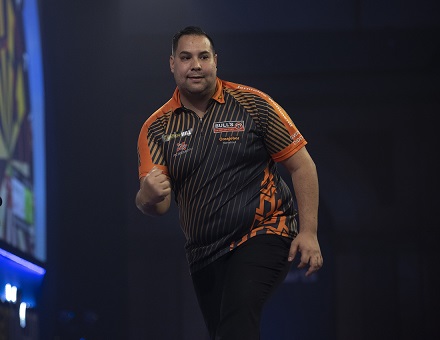 Jermaine Wattimena enjoyed a convincing success against Welshman Nick Kenny to move into the third round
The quickfire Dutchman enjoyed a 3-1 victory to set up a last 32 meeting with World Matchplay champion Dimitri Van den Bergh. Wattimena only missed one double attempt in the first set, which he won 3-1 with the aid of a 92 checkout, before Kenny clinched set two by the same scoreline. A brilliant 156 finish helped Wattimena regain control before he went on to wrap up the victory, taking the third and fourth sets by the same two-leg margin.

Stephen Bunting set up a tasty third round tie with James Wade by coming from a set down to defeat Andy Boulton in a sudden-death leg, producing an 11-darter when it was most needed to keep his hopes alive.
Boulton followed a 129 checkout with an 11-darter as he took the first set 3-1 and also finished 149 to lead in the second, only for Bunting to take out 148 before edging the second in a deciding leg. Former Lakeside Champion Bunting then moved 2-1 up in the tie as he took set three without reply, including a 109 checkout, before Boulton won the fourth in the same manner. The deciding leg saw Bunting finish 120 to move 2-1 up, while Boulton posted a 14-darter to force a deciding leg in which he landed a 180 in response to his rival's 177 before the St Helens man took out 84 for an 11-darter to snatch victory.

Ricky Evans came from a set down to set up a third round showdown with Michael van Gerwen by defeating Mickey Mansell 3-1 in Wednesday's opening tie. Mansell broke in the game's opening leg and secured the opening set with a 14-darter in leg four, only for Evans to level by taking the second with a 3-1 scoreline. The Kettering thrower raced through set three in just 41 darts before finishing 104 and 102 in successive legs as he wrapped up victory by winning the fourth 3-1 to move into the last 32.