Jonny Clayton lit up Night Three of the Unibet Premier League with a nine-darter in his 7-3 win over Jose de Sousa in Milton Keynes on Wednesday.
Playing in just his third match as part of the full-time Premier League line-up, Clayton produced perfection in the eighth leg of the high-quality contest between two debutants at the Marshall Arena. 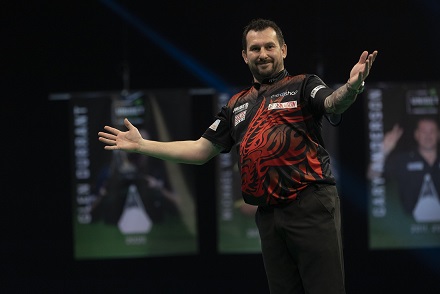 Having landed the 11th nine-darter in Premier League history, the Welshman went on to take the last two legs in 11 and 12 darts each to wrap up his second victory in as many nights, ending up with a 105.26 average. The recently-crowned Masters champion has made a flying start to life in the competition, and sits third behind Dimitri Van den Bergh and Michael van Gerwen in the embryonic table.

"I'm a happy man, it's brilliant," said a delighted Clayton. "I know my kids will have been bouncing around the house tonight watching that. "It was a great game, Jose is a brilliant player. We've played each other a few times on tour and I knew I'd have to play my best to win and thankfully that's what I did. "It's all going well for me at the moment. The darts are flowing nicely, my confidence is high and I'm enjoying it. "I won't get ahead of myself though; my aim is still just to make sure I'm still in the competition after Judgement Night." 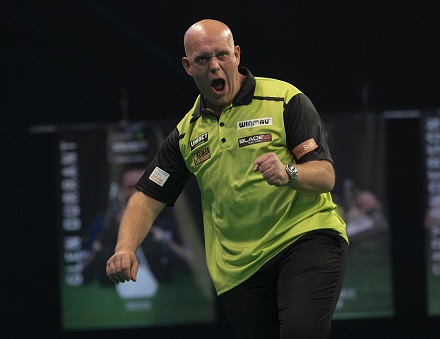 Night Three had begun with a repeat of the 2019 Premier League final, as Michael van Gerwen produced a vintage display in a convincing 7-3 defeat of Rob Cross.
Van Gerwen averaged 107.58 to mark a return to the type of form that saw him lift the Premier League title on five occasions. The opening exchanges were tight, with Van Gerwen leading 4-3 after seven legs, before the world number two reeled off a hat-trick of legs in 15, 15 and 12 darts each, wrapping up the win with a 100 checkout.

"To win a game like this against Rob is good for my confidence," said Van Gerwen. "Things are starting to change for me in a positive way. "Rob is a phenomenal player, you have to do the right things at the moments to beat him. I'm glad I was able to tonight. "It's going better than last year but I need to make sure I keep this going now and keep towards my aim of winning my title back."

Van Gerwen's Night Two victim Peter Wright bounced back from a disappointing performance against the Dutchman with a 7-4 defeat of Gary Anderson. Despite six 180s from Anderson, Wright regained his clinical edge on the outer ring, pinning seven of his 13 double attempts to come out on top in the clash of Scotland's 2019 World Cup of Darts winning teammates.

"I woke up today and I decided I needed to use these darts to straighten up my throw," Wright explained, having returned to the design of dart with which he won the World Championship. "It's nice to get a win against Gary because he normally beats me! "I think I've played the best three players first so it's been a tough start for me and I'm happy to get my first win on the board." 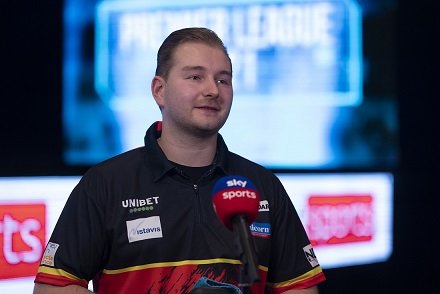 Van den Bergh sits top of the pile after his 7-0 whitewash of Glen Durrant heaped further misery on the reigning Premier League champion, who continued his torrid start to the season. Durrant's 16 missed double attempts were duly punished by Van den Bergh, who like Clayton has picked up five points from six on offer so far.

Last year's runner-up Nathan Aspinall continued his return to form with a comfortable 7-4 victory over James Wade. Aspinall's doubling was once again on point as he took a 6-2 lead, and though Wade rallied, Aspinall closed out victory with a 76 checkout.