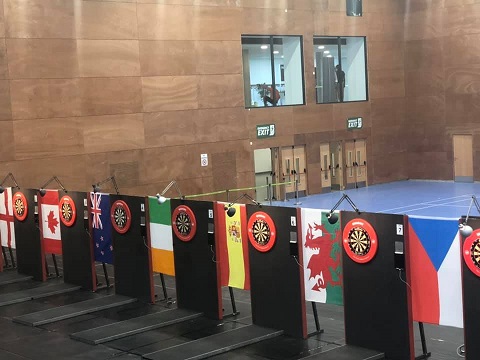 Leading junior players from around the world are preparing to descend on Gibraltar for the Junior Darts Corporation's festival of darts.
The new Europa Point Arena in Gibraltar will host the three one-day tournaments as players from as far afield as Australia, New Zealand, India, USA, Canada and Iceland do battle on the oche.
The PDPA Junior World Cup will see the action begin on Tuesday September 24, with 26 teams representing the 16 nations doing battle in a team event.
The focus will then switch to individual action on Wednesday September 25 for the DartConnect Junior International Open, which will be a knockout event played to a winner on the day.
Thursday September 26 will then see the early rounds of the annual Scott Farms International Junior World Darts Championship take place, as the players begin their challenge to win the newly-named Tommy Cox Trophy. Play in Gibraltar will be up to, and including, the semi-finals, with the final of the Junior World Darts Championship taking place on Saturday December 21 at Alexandra Palace during the William Hill World Darts Championship.

Dutch youngster Jurjen van der Velde will be defending the Junior World Darts Championship title which he won in 2018, while the Irish challengers will include Keane Barry - who is set to compete in the Tom Kirby Memorial Irish Matchplay final in Dublin next month.

Live stats from all events will be available throughDart Connect throughout the week, along with streaming via Youtube .
The week's activities in Gibraltar will also include a welcome meeting on Monday September 23 which will include a shirt presentation, as well as an international accreditation evening for worldwide JDC Academy affiliation and education sessions in local schools.