Mensur Suljovic, born 1972 in former Yugoslavia, started to play darts in Vienna. First he concentrated on soft-dart, won several World Championships and some European Championships and was one of the best soft-dart players of the world. Around 1999 he started to play steel-dart on the BDO/WDF circuit as well, qualified once for the BDO world Championship and took part in the Winmau World Masters.
When due to the founding of the PDC Europe more and more PDC events were played in Germany, Suljovic decided for steel-dart and qualified 2008, 2009, 2010, 2011 and 2012 for the PDC World Championship and reached once - in 2011 - the last 16. After two years he again qualified in 2015and 2016 and in 2016 again stood among the last 16. 2016 came his breakthrough and thanks to his achievements on the Pro Tour and the European tour he fast moved up the PDC rankings. In September he won his first PDC tournament, the International Darts Open, and reached the final of the European Tour as well. By now he is ranked seven in the PDC Order of Merit and so will enter the PDC World Championship 2017 for the first time as a seeded player.
I talked to him during the Grand Slam 2017. . 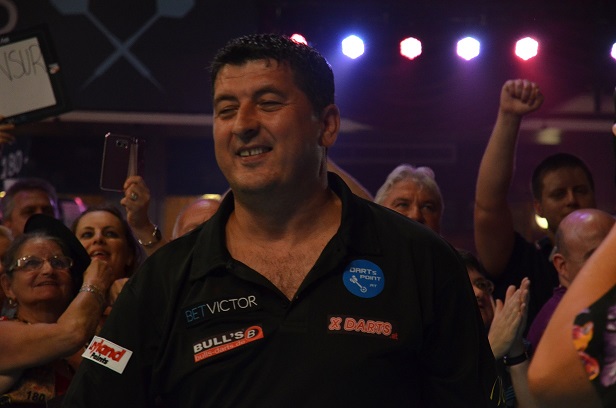 How did it feel when you when you were invited as a seeded player to the Grand Slam? And puts it more pressure to you?

It's an unbelievable feeling. And relating the pressure - at least I don't feel any pressure at all. For me the pressure is on the unseeded opponents who have to perform.

Yes - I quite like it. We all have three matches not only one as in other tournaments which of course reduces the stress.

What did you set out to achieve in the tournament?

I didn't set out anything. I always wanted to play in this tournament, it is a dream for me to be able to take part this year and now I really enjoy every second.

You were more successful this year then you ever had been before - have you already digested everything? 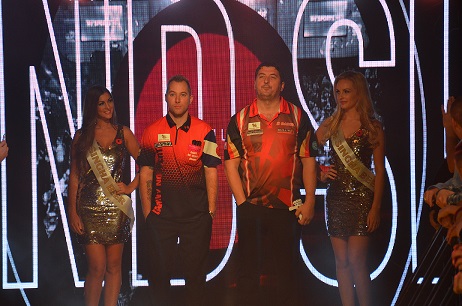 I think it will really take some time till I really understand what all has happened.

Do you have an explanation why it finally clicked this year?

I didn't do anything different, and I didn't change anything either. So probably it is just some kind of "normal" development.

You already were a very successful soft-dart player - does it help now you were on top in soft-darts as well?

Might be a little bit. But in soft-dart everything is different, there might be at highest 50 spectators b around. So you can't say that I was prepared for the situation here and those huge crowds. Except of course that I won everything in soft-dart what could be won.

Did you stop completely now with playing soft-darts?

I concentrate on steel-dart now but I didn't completely abandon soft-dart and soft-dart will always have a place in my heat. After all that's where I did come from and I will never forget it. 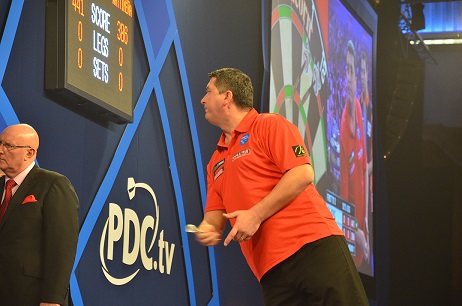 What are your ideas relating soft-dart today? Is steel-dart might be "better" dart?

Could one say the PDC Europe is to "blame" you are now a steel-dart player?

Yes, to be sure one can say the PDC Europe is "to blame" or rather Werner von Moltke. Those tournaments he brought to the continent made that I decided to play steel-dart.

And would you say you benefitted from it?

To be sure. It was a big step forward for me.

In the past you took part in BDO/WDF tournaments as well.

That's true. I even once qualified for the BDO World Championship and twice for the Winmau World Masters. But somehow those tournaments not really convinced me. Somehow they were not really professional.

There happened a rather peculiar incident in one of the tournaments - during the German Open 2007 - when you Last 16 opponent Gary Robson just left the stage and ditched you...

Oh yes I still remember this. But I never got an explanation or an excuse for it. You see - during the tournaments the BDO Top players always had a special position. They didn't have to explain anything or even excuse themselves. 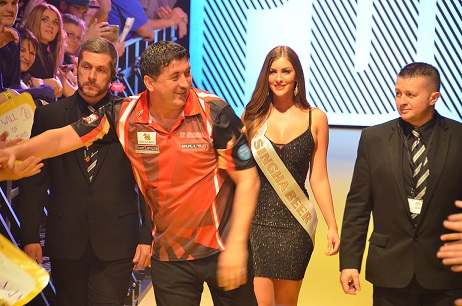 How are your contacts to the other players on the Pro Tour - you don't speak much English I believe.

Yes - my English is not good. But in the end it is no problem at all. We all meet there to play darts. We all seem to conceive without many words. And I feel we are all friends nevertheless.

How popular is the sport of darts in Austria and are Rowby -John Rodriguez and you well-known?

A lot of darts is played in Austria, but it is more or less nonexistent in the press and the media. It sometimes happens with hind side a report may appear in the Kronenzeitung or the Kurier when we've been successful. But to be sure neither Rowby nor I are recognized or talked to in the street in Austria though it can happen in other countries.

How much dart is played outside of Vienna?

Dart is played everywhere in Austria and there exist quite a lot of young talented players. 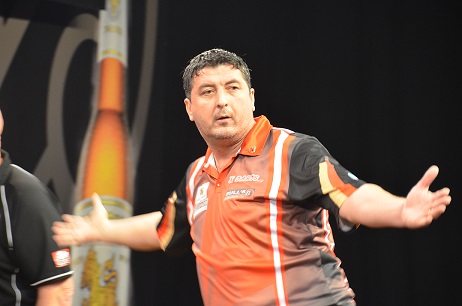 And what can I find in your own pub???

The PDC Europe for many years organized two events in Austria. That was reduced to one and at first it looked none would take place in 2017 at all. . So the Austrian dart players most of the time have to qualify by the European qualifier for the events of the European Tour which certainly is much harder than by Host Country qualifiers.

We've talked a lot about this topic recently. Of course it is a disadvantage for us Austrian dart players. But when such an event takes places in Vienna there'll only be around 1500, 1600 spectators, might be it is the same in any major city. I always told Werner von Moltke he better should organize an event might be in Graz. There are a lot of dart players and all are crazy for dart. When the number of participants is so low the expense is too high for the PDC Europe. That we'll have an event in Austria after all next year again probably is attributed to me and my achievements this year.

What are your thoughts about the Bulls Super League?

I really only can recommend it. That really is a fantastic opportunity and we all who took and take part in it - not only me - improved a lot.

How difficult is it to find a sponsor?

That to be sure is very difficult. But I am very lucky with Bulls. We are always in contact, they attend to all my wishes and they try all the time to improve my darts. But the sponsoring is not limited to the equipment. I am supported financially as well. 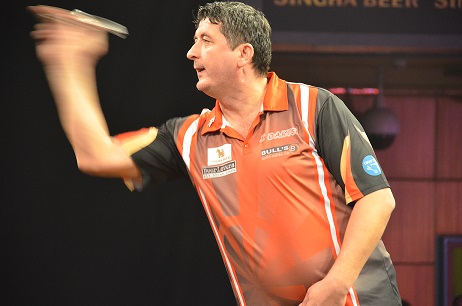 You are now spending a lot of time on the road. Do you still have time for your family?

It is not easy. And yet my family is very important for me. That is the reason my wife and my son accompany me as often as possible. But my son is now eight and of course has to go to school. It really is not easy now.

You always stress you need to practice a lot to keep up your standard. How much do you practice?

That is true and when I am at home I practice for hours. Even before the Grand Slam I travelled to Scotland to practice there for a few days. It was cold there really, really cold and I was not prepared for that so I caught a cold. Of course I don't practice as much when I am on the road.

I am very lucky with this. There are the three Rodriguez brothers and beside Michael Rasztovits who lives quite nearby. When I ring him he can be with me in 20 minutes when he has time. As soon as I am back home I will call him!

One hears a lot about coaching in darts and sports psychology today to support the players - what do you think about it?

Well - I composed my own practice and I feel that each player probably has to practice something different according to his own requirements. So I don't think highly of coaches. But for many years I worked together with a mental coach. I've got several cassettes he recorded for me and I still often listen to those.

As you now are an experienced player - does it still matter to you against whom you will play or would you still to prefer to avoid players like Michael van Gerwen?

Honestly - in those cases I am still rather nervous. Before and during those matches I still feel my heart beat. 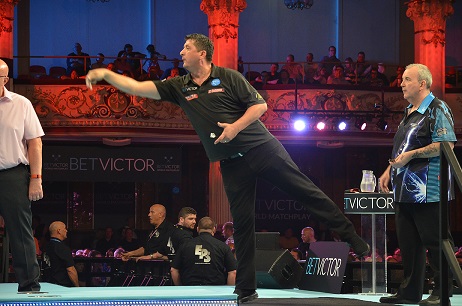 I have to admit that I don't like it very much.That's just not in me.

You are more a slow thrower. Does it in any way affect you when you play against a fast thrower?

No. I don't think it affects me. But I have to say that my throw by itself is a problem. I really had a nice smooth throw but then I got dartitis. I got rid of the dartitis luckily but the throwing style stayed like this. I tried but I don't seem able to change it.

How do you handle the noise of the crowd and the sometimes unfair behavior?

Fortunately I am able to fade everything out and not really notice it.

How would you describe yourself - and your strength and weakness??

To be sure my biggest flaw is the stage play. Well and my strength to be sure is that I really am able to fade out everything and don't realise anything what happens around me. 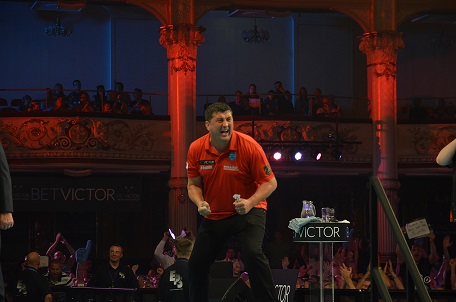 Do you set yourself goals and what are your goals?

I by now achieved everything I always wanted to achieve. And so I can say I have no more goals.

Do you have a favourite tournament?

That has to be the World Championship. Though till now I never produced there.

What do you do to relax after a match?

Always the first thing I do is to sit calmly down and mull the whole match over.

When you go on holiday can it happen the darts are left at home?

No, I never till no went on a trip without my darts. I always take them with me when I go on holiday as well.


Suljovic didn'tn survive the group phase of the Grand Slam.