It's Halloween! Or Punky Night, if you live in Somerset, England!

This evening, as we in America toss Tootsie Rolls into sacks thrust at us by sticky little children cleverly disguised as sticky little children in sheets, across the pond in Somerset, the Brits are handing out goodies to kids wandering door-to-door as. blimey, who the hell knows? They could be dressed up as cucumber sandwiches for all I know.

Sorry. That was unfair. This column isn't even about Halloween. Actually, I haven't decided yet what I'm writing about. I do that sometimes. 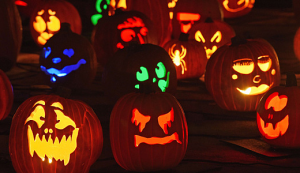 I'm in Havana, Cuba (pronounced Cuber in parts of New York and Boston). I am just about to begin a cigar and rum-soaked search for the darts scene. Life is rough.
But that's what's defined Dartoid's World for the past two decades as I have wandered the world in search of the elusive Holy Grail - the perfect game in the perfect darts-dive. And, of course, the perfect beer.

Since last Halloween, I have enjoyed our sport with Daniele Talozzi in Paciano, Italy, Rob Heckman in Orlando, Florida, and Kace Sanders in North Pole, Alaska. I have visited Machu Picchu and Easter Island and searched for darts with Stacy Bromberg and Terry Maness, found excellent darts bars in Bali, Indonesia, and Seoul, South Korea, and watched some of the best players in North America duke it out at the CDC finals in Woodland Hills, California.
And in June, I partnered with Steven Wilcox at the Michigan Cup, organized by Willy Doit, John Upham, and Kory Nichols - which raised a bunch to help the citizens of Flint, who were and still are caught up in the water crisis. Unfortunately, Stephen's run of 13- and 14-dart games wasn't enough to drag my sorry ass to the final - which was won by Gordon Dixon and D.J. Sayre (who generously contributed some of their winnings back to the cause).

Over the years, it seems I always have followed in the footsteps of either Dr. Eddie Norman or the late, great Barry Twomlow. As far-flung or exotic as a locale may have been - as for example was the case in Ulaanbaatar, Mongolia, a few years back - I have found that Eddie (or Barry) have come before.
I am not sure this is the case with Cuba. I have attempted to reach Eddie for advice, but he is currently making his way, sans Internet access, across Australia, sharing the darts gospel.

In advance of landing at Havana's Jose Marti International Airport, I was unable to connect with anyone familiar with darts activity in the country. So. as I was relegated to doing so many years ago, before the joys of the Internet, I will be asking taxi drivers or hotel concierges to point me straight or, as I once did in Brazzaville, Congo, I will be stopping by the British Embassy (where there is always guaranteed to be a board or those knowledgeable about where to find one).

(This afternoon I was tipped off to a possible board in Varadero, which is a scenic couple-hour drive along the northern coast from where I write tonight from Havana's Memories Miramar Hotel.)

As the sun sets in advance of what is certain to be one of the most interesting weeks of all my travels, I am pleased to report that my most important work is already complete - cigars for the Old Dart Coach and Gordon Dixon are purchased and packed.

I hope the goblins don't get the ADO. (Sometimes I lie.)