Things came together on the last day of the Pro Tour season! 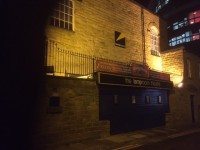 I went off to Barnsley on Tuesday morning to go and support our sponsored player Diogo Portela in the final Players Championship of the season. It was with a sigh of relief too that it was the last one; only because we got involved half-way through the season and it has been a steep learning curve for both Diogo and the Darts Performance Centre and the thought of a little breathing space and time to prepare for the World Championships was a very appealing prospect!

But! Is it a case of be careful what you wish for? Talking of cases, on Tuesday night after once again Diogo had played very well v Mickey Mansell but suffered another first round exit I paid a visit to the local theatre for a case about a mystery on Dartmoor.

Diogo and all the rest of the players had been invited back to the Barnsley Metrodome for an excellent PDPA initiative, the Sporting Chance Seminar. Sporting Chance market themselves as Physio for the mind, spirit and soul and are there for all sports people suffering mental health issues or any crisis that is maybe handled better by a 3rd party rather than a sportsman keeping silent as they don't want to reveal their problems to family, friends or professional advisors.
So managers/agents, wives and girlfriends weren't invited. From a personal point of view, I totally respect that decision but nevertheless from the academic background I have emerged in to darts from it would have been fascinating to attend. My only argument would be if managers did have a clear understanding of what was on offer perhaps they may be able to direct a player towards the Sporting Chance service if they knew what was on offer and had noticed "tell tale" signs of stress or anything else they could get help with.

Anyway, I noticed that one of my heroes - Sherlock Holmes-the greatest analyst of all time was appearing in a theatre 100 metres from the hotel in a production of Hound Of The Baskervilles. I had a Facebook post all set to go checking in at the theatre and asking for the solution to the mystery of how Diogo can play so well but still get beaten. The curtain went up before I posted it and it never saw the light of day again!

But on Wednesday it was three top PDC players who were left without a clue on how to beat Diogo. I would argue he did not play hugely differently to how he had been playing. His one treble a throw target we have discussed was being hit thanks to the hours of practice Diogo had been putting in. The doubles he missed were only when the opponent was miles behind. Best of all he skillfully dealt with his trembling hand when hitting the double to KO Vincent VdV! I must start practising what I preach as my hands were shaking more than Diogo's as he popped the winner in.

So a Last 16 place and Jelle Klassen, Aden Kirk and Vincent Van de Voort accounted for. In the Last 16 game v Ron Meulenkamp I felt Diogo had hit a bit of a wall but Ron deserved his win. It was all new for us after Jelle and Aden had been disposed of. Another target had been of course to win 2 games on the bounce. That was achieved so again we were in a position we had not been in to before so getting the preparation right was a bit of knowledge and a lot of winging it!

So, it was a brilliant end to the season. Wish we could play another one tomorrow :) But it is case closed at the PDC Pro Tours for 2017 - we will be getting prepared for the Ally Pally now. Next week we are releasing the Challenger 2 darts which have had a very positive impact on Diogo's win rate. We will also begin the search for some sponsors to get involved in the adventure at the Palace which is coming up in December !