The Dutchman has won the European Championship, World Series of Darts Finals and Grand Slam of Darts titles over the past month, and extended his unbeaten streak to 28 matches as he scooped the 100,000 pound title. 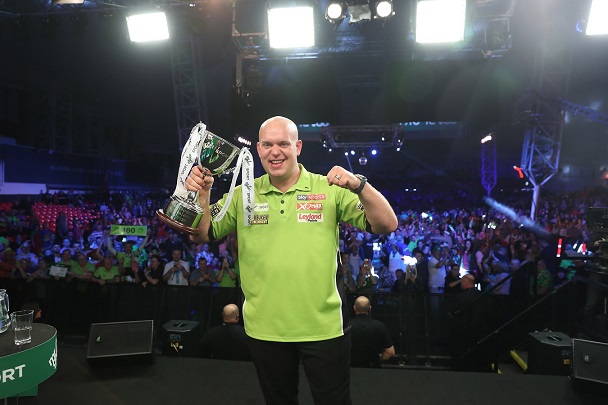 Van Gerwen had seen off Jan Dekker in their all-Dutch quarter-final earlier on Sunday and then pulled clear from two-all to win 11-3 against Justin Pipe in the semi-finals.
He was equally dominant in the final against Welshman Clayton, who never recovered from seeing Van Gerwen race into a five-leg lead before the Dutchman closed out yet another big title. The world number one set the tone with two 180s in a 12-darter to open the game, and also finished 100 in leg five to move 5-0 up, with Clayton claiming two of the next three to reduce the arrears. Van Gerwen, though, finished an 11-darter as he moved 8-2 up and added a 13-darter to edge towards victory before double five sealed glory for a fourth time in five years.

"It's been a phenomenal weekend," said Van Gerwen. "It was a great tournament, I think I played really well and I had to perform against new players round by round, so I had to keep my focus. "Jonny did great to reach the final. It's a big step for him because he wasn't in the top 32, so it's a massive step for his career. Fair play to him, he did really well but I'm glad I won the final. "After not being here for the UK Open [in March] I'm really glad to be back here with this trophy. "I've won the last four TV tournaments so this is great for my confidence going into the World Championship - but I'll enjoy this title first." 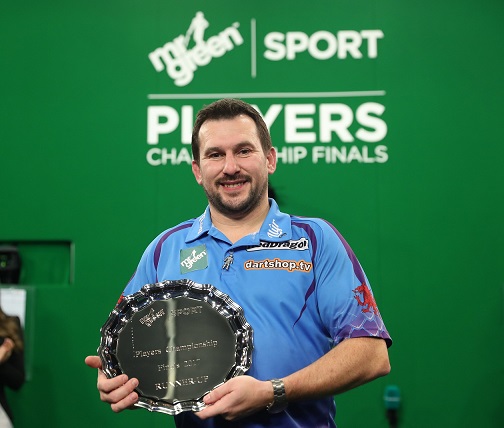 Clayton had won through to his first TV final, with his career-high 40,000 pound in prize money moving the 43-year-old into the world's top 32 for the first time and putting himself in line for a Grand Slam of Darts place in 2018.
Clayton showed his class by coming from 7-4 down to defeat Steve Beaton 10-8 in the quarter-finals before also fighting back from a 6-3 deficit to see off top seed Rob Cross 11-8 in the semis.

"You take one game at a time, and to get this far in front of this amazing crowd was awesome," said the Pontyberem ace. "I've had a brilliant weekend and the support I've had has been amazing. "When you play against Michael on form like that it's really difficult, but I enjoyed the final. I'm proud of what I've achieved this weekend. "It's a learning curve, my first final and I thoroughly enjoyed it, and I'll take a lot out of that game."

Pipe's run to the semi-finals was his best finish in a televised ranking event for four years - since he previously reached the semi-finals of the same event for a second time in 2013 - as he defeated Daryl Gurney 10-9 in the last eight.
Cross was also a semi-finalist as he continued his impressive debut year on the PDC circuit with a fine 10-6 win over leading left-hander James Wade in their quarter-final.