Jose De Sousa produced the performance of his career to claim his first European Tour title with an 8-4 defeat of Michael van Gerwen in Sunday's European Darts Grand Prix final. 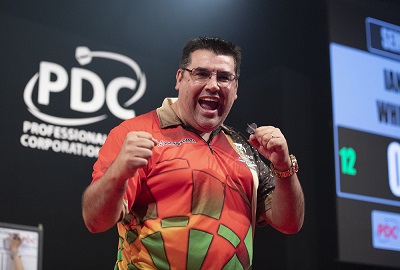 The fast-emerging star from Portugal lived up to his "Special One" nickname by going all the way to glory in only his third appearance on the European Tour since joining the circuit full-time in 2019.
Having whitewashed Germany's Ricardo Pietreczko to begin his Sindelfingen challenge on Saturday, De Sousa then showed his title credentials with a fine 6-3 third round defeat of Gerwyn Price. He backed that up with a 98 average in a 6-4 quarter-final defeat of Darius Labanauskas, before surviving one missed match dart against Ian White in a thrilling semi-final. White took out finishes of 126, 120 and 118 as he moved 6-5 up, but missed double 16 for the match in leg 12 before De Sousa fired in an 11-darter in the deciding leg to move into the final.
There, the 46-year-old claimed the scalp of the world number one to take the 25,000 pound title, joining Price and Devon Petersen as a European Tour winner this season in style. De Sousa averaged almost 106 in the final, finishing eight doubles from 13 attempts and hitting seven 180s in a brilliant performance. The pair traded 84 finishes in the opening two legs and were locked after four before De Sousa took three in a row, including an 11-darter to break and finishes of 87 and 86. Van Gerwen replied with two 14-darters in the next three legs, but a huge 146 checkout from De Sousa moved him 7-4 up before he wrapped up the win by taking out 88 for a 12-darter. 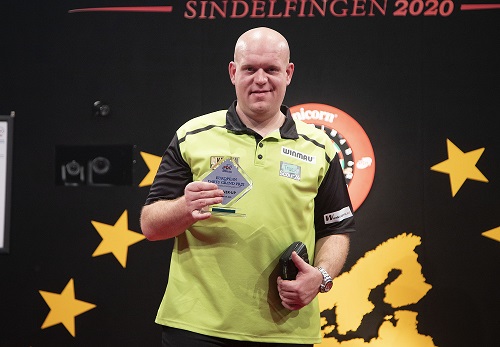 "It can't describe my feelings because it's unbelievable," said De Sousa. "I'm really emotional. "Every title I win, it's a dream because it's so difficult, but this is my biggest title and I'm very, very happy. "I thank the crowd, they were wonderful and this title is for me and all of them. I want to share it with them and all the people who support me; my management and my family. "I can do anything right now, that's what I think. It doesn't matter who I play against, I just play my game. I know that I can do it and I have so much confidence in my game."

Van Gerwen survived missed match darts from both Vincent van der Voort and Nathan Aspinall on Sunday, but hit top form with a 170 checkout and seven doubles from 11 attempts in his 7-1 semi-final win over Mensur Suljovic. However, the Dutchman was afforded only five darts at a double by De Sousa in the final - hitting four - as he missed out on a first European Tour title of 2020.

Suljovic edged out Jamie Hughes before whitewashing Rob Cross as he reached his third semi-final of 2020 on Sunday, while White defeated Michael Smith and Maik Kuivenhoven as he won through to the last four. Aspinall and Lithuania's Darius Labanauskas joined Cross and Kuivenhoven in losing out at the quarter-final stage, while Premier League champion Glen Durrant lost out 6-3 to Kuivenhoven in round three.

The PDC European Tour season concludes next weekend with the International Darts Open in Riesa, Germany, from October 23-25. The tournament will be streamed in PDCTV at video.pdc.tv as well as through bookmakers' websites worldwide. 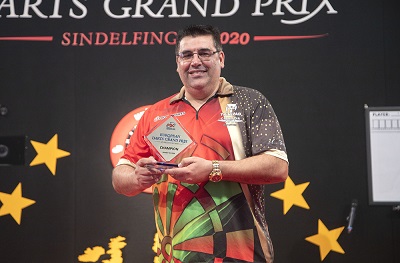