Four-time winners England avoided an upset against Brazil as the Cazoo World Cup of Darts first round concluded on Friday night, when 2019 finalists Republic of Ireland were knocked out by Portugal. 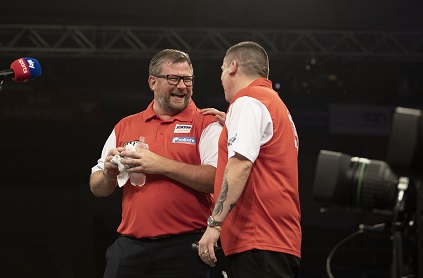 England's James Wade and Dave Chisnall overcame an early scare from Diogo Portela and Artur Valle before opening their bid to win a fifth World Cup title with a 5-2 success.
The Brazilian duo came from a leg down to punish missed doubles from the English pair and create a 2-1 advantage early on, threatening a major upset. England, though, levelled in leg four before Wade took out 64 - to follow his 68 finish in leg one - as they regained the lead, before Chisnall finished double five and then set up the UK Open champion for tops to seal victory with four straight legs.

"We did alright, considering we were both nervous, but I believe if we played right then it wasn't 60 percent of what we can do," said Wade, who is making his first World Cup appearance since 2010. "It was really hard tonight to get into a rhythm. I was fortunate that Dave hit some big scores at the right times."

England now meet South Africa on Saturday, after Devon Petersen and Carl Gabriel overcame Spain's Jesus Noguera and Jose Justicia 5-4 in a thriller as the nations enjoyed a final-leg shoot-out in Jena.
After Noguera took the opening leg on double ten, Petersen finished double 16 to level before Gabriel took out 76 on the bull to move South Africa 2-1 up. Spain levelled with a 13-darter, only for South Africa to reply in kind before Gabriel - competing in his second successive World Cup - landed double eight to create a 4-2 cushion. Spain rallied as Justicia closed out a 14-darter and Noguera finished 98 for a 12-darter to force a deciding leg, but the latter was unable to land tops for victory and Gabriel stepped in to hit the same bed for a memorable win.

"It's amazing - I'm lost for words," admitted Gauteng's Gabriel. "It didn't go that well last year but to go through to the next round is massive. "The feeling was good and I was a bit more relaxed because I knew what to expect after last year, and Devon spoke to me through the entire game and calmed me when I got a bit anxious. "It's one of my dreams to be on stage playing a Singles match and that's coming to fruition tomorrow, so I'm excited."

Portugal's Jose de Sousa and Jose Marques came from 2-0 and 3-1 down before snatching a dramatic 5-4 win over 2019 finalists Republic of Ireland in an entertaining contest.
William O'Connor took out 94 and double five as he secured the opening two legs for Ireland, and was supported by Steve Lennon as they took leg four for a 3-1 cushion. Portugal, though, followed up a 96 finish from Marques in leg three with checkouts of 78 and 76 from De Sousa to level, before they edged a tense seventh leg to move 4-3 up. Lennon pinned double four to take the game to a decider, but Portugal were first to a finish and De Sousa posted tops to complete a 14-darter as they reached round two for a second successive year.

Northern Ireland survived five missed match darts from Hong Kong's Kai Fan Leung and Man Lok Leung as Daryl Gurney and Brendan Dolan edged through to a second round tie with Portugal.
Dolan's 97 finish was cancelled out by Kai Fan Leung's 69 checkout in leg two, and the next four legs were traded before Hong Kong broke on tops to lead 4-3. However, both players missed the chance to secure victory in leg eight as five match darts went begging, with Gurney hitting double two to keep Northern Ireland's hopes alive before Dolan posted tops in the decider.

"I'm so glad to get through that," said Gurney. "Brendan played really well and kept us in the game. We were fortunate and we got there in the end. "We didn't look past Hong Kong tonight - when we were 4-3 down and they had darts to win the match we got lucky, but we'll move on to Saturday now." 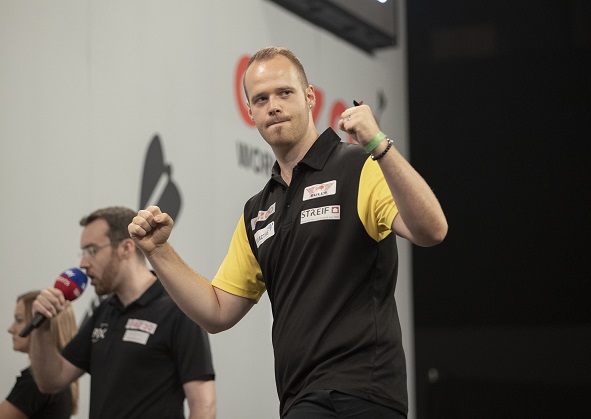 Host nation Germany delighted the Sparkassen Arena crowd as Gabriel Clemens and Max Hopp defeated Canada's Jeff Smith and Matt Campbell 5-3.
Campbell punished German missed doubles to claim the opening leg, and Smith then took out 107 to move Canada 2-1 up before Clemens stopped the 2020 quarter-finalists' momentum with a 118 finish. The next two legs were traded, but Hopp landed tops in the next two legs to punish Canadian missed doubles and move the hosts through to a second round meeting with Japan on Saturday evening.

"I showed some nerves in this game but we're just happy to be through to the next round," admitted Hopp. "Gabriel had the power scores to keep us in the game and I'm glad I hit the double top in the last two legs to put us into the next round because Canada was a hard opponent." 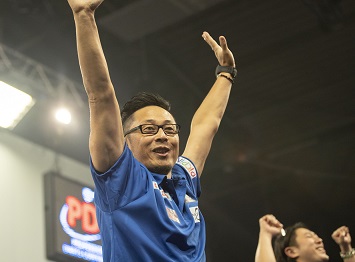 Japan's Jun Matsuda and Yoshihisa Baba impressed on their World Cup of Darts debut with a 5-1 defeat of Russia's Boris Koltsov and Evgenii Izotov. The second night's opening tie saw the big-stage newcomers move into a 3-0 lead before Koltsov took out 72 to hit back for Russia - before Baba finished tops and 96 to seal Japan's last 16 spot.

Fourth seeds Belgium made a strong start to their challenge as Dimitri Van den Bergh and Kim Huybrechts defeated Greece's John Michael and Veniamin Symeonidis 5-2.
After the opening two legs were shared, the Belgian duo - who have teamed up to reach the semi-finals twice in the past three years - took three in a row to move 4-1 up. Michael finished 120 to keep Greece's hopes alive, but Van den Bergh posted a 180 and then landed double five to seal Belgium's second round place against Austria. 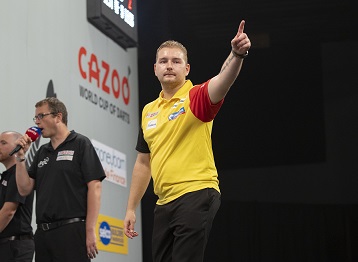 "Playing for your country is always the best thing there is and it's amazing to be here," said Huybrechts, a World Cup finalist alongside brother Ronny in 2013. "I want to do well for my team-mates. - I've always been a team player and I grew up with pairs competitions. "We always have a game plan and Dimitri's ranked fifth now. If we click, then we're one of the best pairs in the world."

Austria's Mensur Suljovic and Rowby-John Rodriguez came from a leg down to defeat Philippines' Lourence Ilagan and Christian Perez 5-1. Ilagan took out 112 to claim the opening leg for the Philippines, but Suljovic finished 104 to level in an encouraging start to only his second event since April. Rodriguez hit double 16 to secure leg three as Austria moved ahead, and the pair took the next three legs in clinical fashion to wrap up the win with five doubles from six attempts.

The second round will be split across two sessions on Saturday in Jena, and sees the ties contested with two Singles games each worth one point, and a Doubles decider should the scores be level.