Luke Humphries claimed his third European Tour title of 2022 with a stunning 8-7 win over Rob Cross in Sunday's Interwetten European Darts Grand Prix final as the pair renewed their rivalry in Stuttgart. 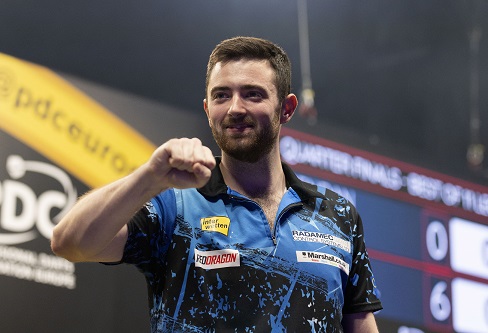 Humphries was victorious against Cross a week ago in Prague to claim the Czech Darts Open title, and matched that result to scoop a third 25,000 pound European Tour triumph of 2022 in style.

/ Cross this time took the final all the way to a deciding leg, but was agonisingly left just short of victory for a seventh time on the European Tour - and in his third decider of the year - as Humphries took out 108 for the title.

"It's fantastic," said Humphries. "Rob's one of the nicest guys in the PDC and it's no coincidence [that] we have practiced together for the last two European Tours and made the final together. "It was a great game, full of everything. At the start of that game we must have been averaging 113-114, it felt amazing. I know I dropped off a little bit but then I missed because Rob put me under pressure. "I thought I played fantastic there but Rob was the better player overall because he was consistent throughout the whole game. "I missed a couple of match darts but that 108 was clinical and one of the best out-shots of my career. "I'm making huge strides in the game and there's a lot more to come."

Humphries built his form as the day progressed, seeing off Joe Murnan 6-3 in the third round, whitewashing Brendan Dolan in the quarter-finals with a 100 average and then posting a 108 average in a brilliant 7-4 semi-final defeat of Peter Wright.

Cross took the final's opening leg on double 18 and hit six perfect darts in leg two, only for Humphries to level in 11 darts and then claim two five-visit legs to move 3-1 up. Cross hit legs of 14 and 13 darts in response either side of an 11-darter from Humphries, who then produced a remarkable eighth leg where he scored 21, 180 and a second 180 before finishing 120 for a 12-darter and a 5-3 cushion. Humphries then powered in a sixth 180 of the final in another 11-darter to break throw for a three-leg lead. Superb legs of 13 and 14 darts from Cross saw the gap closed to one leg, only for a clinical 121 bullseye finish to move Humphries a leg away from victory at 7-5. Two missed match darts, at double 18, in the 13th leg allowed Cross to keep his hopes alive at 7-6, and another chance to close out victory - this time at double 16 - went begging as the 2018 World Champion forced a deciding leg.

Cross was first to a finish in the final leg, but was unable to give himself a dart at a double on a 118 finish, and Humphries stepped in to complete a 108 combination for glory. 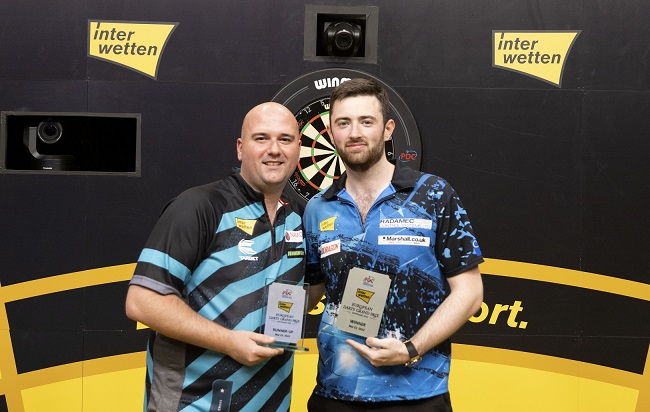 Cross began Sunday's final stages in scintillating fashion by landing a 170 checking and finishing six doubles from as many attempts in a third round win over Krzysztof Ratajski. He then overcame Rowby-John Rodriguez in the quarter-finals by a 6-4 scoreline before averaging an unstoppable 110.73 in his semi-final defeat of Damon Heta. However, the reigning European Champion was left to rue another loss in a European Tour final - his seventh in a run spanning five years since turning professional in 2017.

"I'm glad I don't struggle with 'majors' to win them - these are ten times harder!" admitted Cross. "Credit to Luke, I thought he played great, he was the better player and if he hit doubles earlier I was out of there earlier. "He's superb and I've got a lot of time for him."

Australian Heta was appearing in his second European Tour semi-final of 2022 after enjoying wins in deciding legs against Ryan Searle and Martin Schindler on Sunday.
World Champion Wright continued a strong weekend with 6-1 wins over Cazoo Premier League leader Jonny Clayton and UK Open champion Danny Noppert - where he averaged 111 to reach his first European Tour semi-final since February.
Rodriguez reached his second successive European Tour quarter-final following a third round win over Gurney, while UK Open champion Danny Noppert was in the last eight for the third time this year.
Dolan's win over Andrew Gilding earned him a first European Tour quarter-final since last September, while Schindler was the best-performing home star as the German ace reached the last eight for the second time in 2022.

The PDC European Tour continues next weekend with the Jack's Dutch Darts Championship at the Ijsselhallen in Zwolle from May 27-29. The tournament will be broadcast live on PDCTV, exclusively on DAZN in Germany, Austria and Switzerland, and through bookmakers' websites worldwide.