Michael Smith claimed his first PDC European Tour title for five years with a sensational success in the Jack's Dutch Darts Championship on Sunday in Zwolle, defeating Danny Noppert 8-7 in a brilliant final. 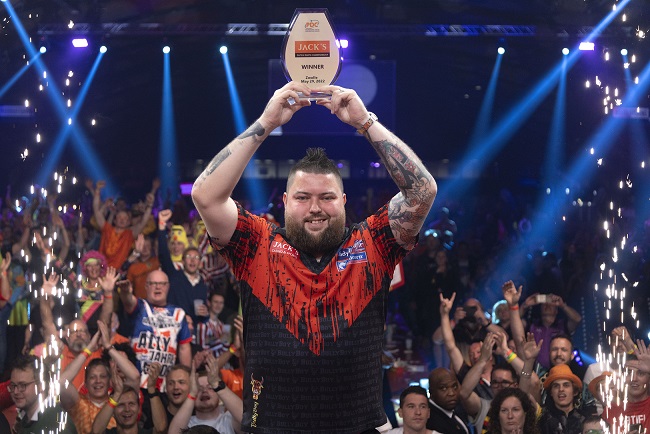 Smith's most recent of four previous European Tour titles had come at the 2017 Gibraltar Darts Trophy, but he scooped the 25,000 pound top prize at the IJsselhallen to conclude a superb month.
Smith had won back-to-back Players Championship events earlier in May, and claimed victory in Newcastle to conclude the Cazoo Premier League season on Thursday.
He maintained that form with a string of stunning displays in Zwolle to pick up a fifth European Tour title of his career - although he was pushed all the way by Noppert in the decider, in a rematch of March's Cazoo UK Open final. The opening four legs of Sunday's showpiece were shared before Smith, aided by six perfect darts, broke throw to open up a 4-2 cushion. Noppert finished 128 on the bull to break back, before the pair traded legs of 11 and 12 darts in a stunning five-leg spell which left Smith 7-6 up. A miss at tops for the title allowed Noppert in on double two to force a one-leg shoot-out, but Smith was first to a finish and checked out 104 for glory.

"It's been five years and I've finally got number five on the European Tour," said a relieved Smith. "It caps off a really good week, with [winning in] the Premier League, and coming here I played some really good stuff. "I managed to hold my nerve in the end with that 104 so I'm over the moon. When I was throwing for that 104 I thought he'll check out the 132 so you've got to go, so luckily enough it went in. "I fly to New York tomorrow and at the weekend it's the US Masters so that's the next one I want to win now."

Smith sealed his hard-fought 7-4 semi-final win over Andrew Gilding with a superb 142 checkout, having earlier defeated Mervyn King in the quarter-finals, and he averaged 111 in an outstanding third round defeat of Damon Heta to open the final day of action. 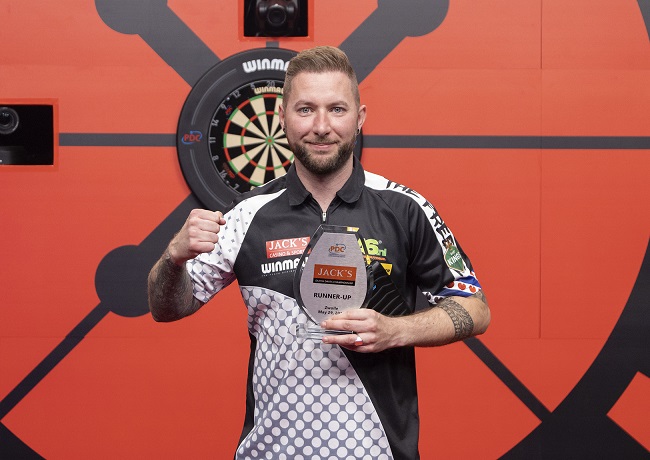 Noppert began Sunday's action with a narrow 6-5 comeback win over World Champion Peter Wright, taking out 126 to force a decider which he won in 13 darts. He also went to an 11th leg in the quarter-finals against Boris Krcmar, repeating the trick with a 13-darter to claim victory, and averaged 103 in a clinical 7-2 semi-final win over Callan Rydz. However, he was left waiting on 132 as Smith secured the deciding leg of the final - meaning that he continues his wait for a first European Tour success after reaching his second final of 2022.

"It was a top weekend, and to reach the final again is great," admitted Noppert, also the Austrian Darts Open runner-up. "This crowd gave me goosebumps."

Rydz ended the hopes of Dutch favourite Michael van Gerwen and also defeated Simon Whitlock to reach the semis, while Andrew Gilding continued his impressive form by seeing off Ryan Searle and Dirk van Duijvenbode to reach the last four.
Whitlock sealed his quarter-final spot in style with a showpiece 150 checkout of three bullseyes against Daniel Larsson, while a 170 checkout and a 105 average was not enough for Dave Chisnall in his third round loss to Van Duijvenbode.

Following events on five successive weekends, the PDC European Tour now enjoys a month's break before returning with the Interwetten European Darts Matchplay in Trier from July 1-3. Click here for tickets.
The tournament will be broadcast live on PDCTV, exclusively on DAZN in Germany, Austria and Switzerland, and through bookmakers' websites worldwide.