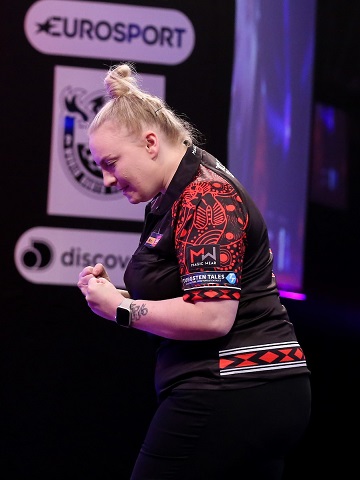 Coming off a win over close friend Lorraine Hyde 2-0 in the first round, Kewish raced out of the blocks against Hedman, winning the first two legs in 15 darts with finishes of 120 and 80. The third was much scrappier, with both players missing a slew of doubles, but Kewish got over the line on double one.
Hedman, a three-time finalist here previously, pushed her harder in the second but Kewish's scoring was relentless, winning the first two legs in 35 darts before sealing it with a 15-darter that included two maximums.
Kewish, the only Australian left in the competition, will be back in action on Friday when she meets either Lorraine Winstanley or Vicky Pruim in the quarter-finals. 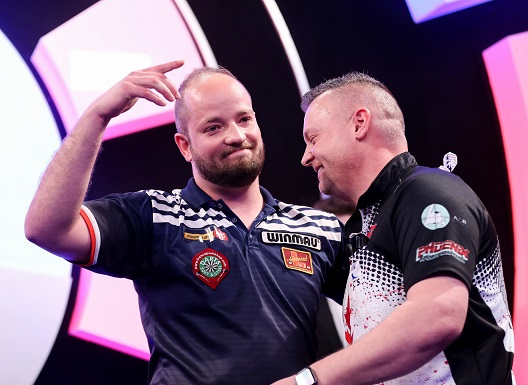 Second seed Thibault Tricole survived an almighty scare from Canada's Shawn Burt in the opening game of the session, surviving six match darts before prevailing victorious 3-2.
Burt had produced the shock of the tournament on Sunday when he dumped out PDC Tour Card holder Connor Scutt 2-0 but made a slow start against the Frenchman, dropping the first 3-2. Tricole's finishing was a weak point through the first half of the game and it cost him particularly in the second set, in which he squandered six set darts and allowed Burt to take it 3-2.
Burt followed that up with a brilliant third set, winning it 3-0 with a 98.02 average. 2-1 down in sets and just three legs away from an early elimination, Tricole responded in kind by taking the fourth set 3-0 and going 2-1 up in the decider. A 20-dart hold of throw for Burt forced Tricole to throw for the match in a sudden death leg, in which Burt raced down to a finish before missing those match darts. With his back against the wall, Tricole took out 74 to complete an emotional victory.
Next up for 'The French Touch' will be England's Steve Hine, who impressively beat the much-fancied Leonard Gates 3-0. 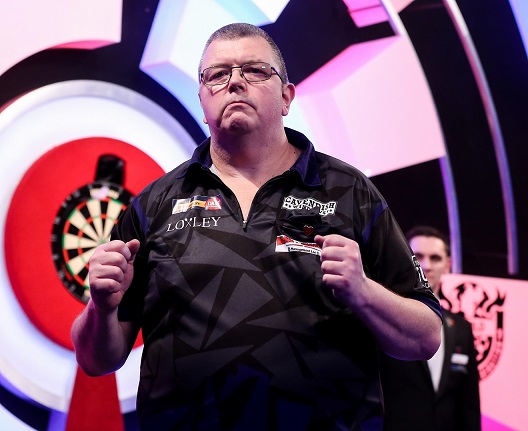 A break of throw in the fourth leg saw Hine take the opening set 3-1 and he continued the second set in a similarly impressive vein, a 116 out and a 12-darter giving him a 2-0 lead. Gates broke back and drew level at 2-2 before missing a set dart, opening the door for Hine to win that leg in 14 darts and the set 3-2.
The third set also went all the way, Hine recovering from busting 130 for the match in the fourth leg by taking out 24 for victory in the decider. 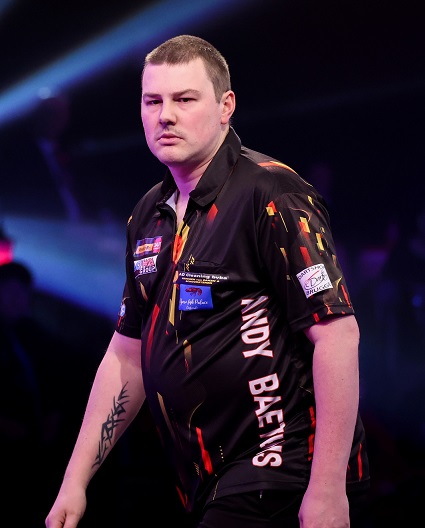 In the final game of the session, Belgium's Andy Baetens fired in five maximums against Dave Parletti as he made a winning return to the Lakeside stage after a five-year absence.
Baetens, now nicknamed 'The Beast from the East', looked like he was going to race away with it when he won the opening two sets without dropping a leg. Much like in his game with Shaun McDonald, Parletti wouldn't give up without a fight. He took out a sensational 156 checkout en route to winning the third set 3-1 and the Surrey man won the opening leg of the fourth.
He just couldn't keep up with Baetens' relentless scoring though, the Belgian going six darts into a potential nine-darter in the second leg and producing finishes of 82, 51, and 54 to wrap up a 3-1 victory.
Baetens, who finished with a 92.35 average, will meet the winner of Scott Marsh's game with James Richardson in the last 16. 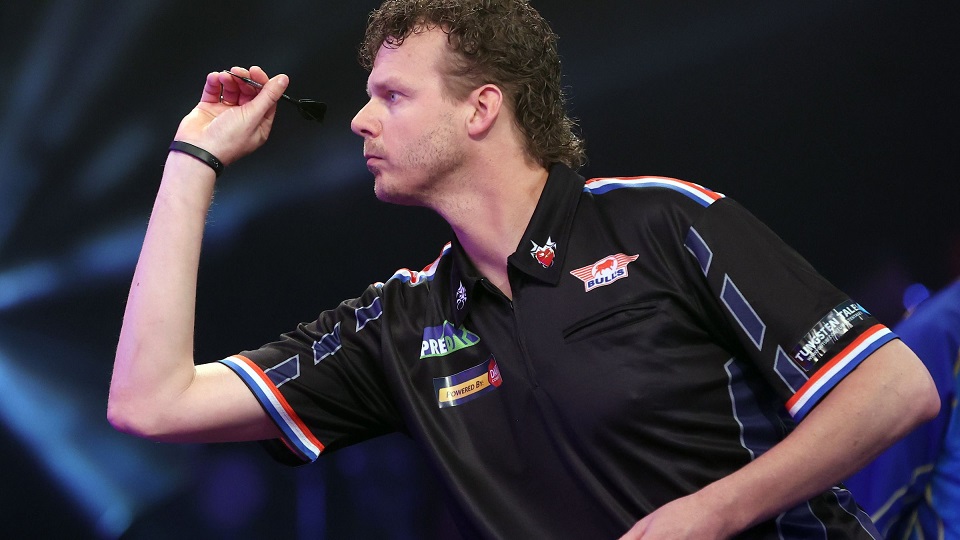 Van Barneveld posted a 103.83 in his 2004 quarter-final win over John Walton but Veenstra surpassed that with a 104.91 in a blistering 3-0 win over teenage standout Luke Littler.
Littler had been so impressive in his tournament opener against Ben Hazel but won just one leg against 'Flyers' and that was a break of throw in the second leg of the match. After that, Veenstra wrapped up the first set with a joint tournament-best 164 checkout and a 16-darter before taking the next two sets 3-0.
The second set was remarkably impressive, Veenstra averaging over 120 as he won it in just 37 darts. Set three was marginally slower, the Dutchman taking 45 darts to round out a massively impressive performance.
Veenstra will be back in action on Friday to face the top seed Brian Raman, who was similarly impressive in ending Jarred Cole's World Championship run with a 3-0 victory. 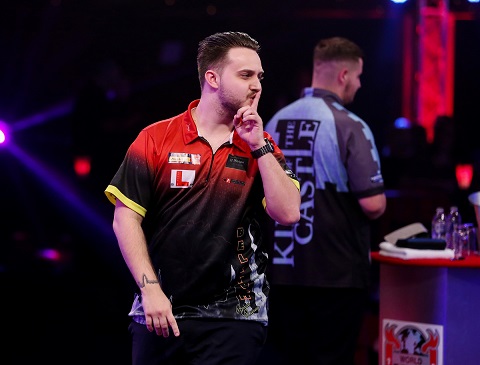 Much like he did in his Last 32 win over Johnny Haines, Raman came flying out of the traps and won the first set 3-0 with impressive finishes of 79 and 91. Cole, who'd accounted for Martin Adams and Antony Allen in the previous rounds, got on the board in the first leg of the second set with a 15-darter. Raman, however, fed off the pro-Cole Lakeside crowd and won the next three legs in just 43 darts to open out a two-set lead.
The first two legs of the third set both went with throw before Raman again turned off the afterburners, a brace of 13-darters wrapping up a straight-sets win that saw him average 97.47. 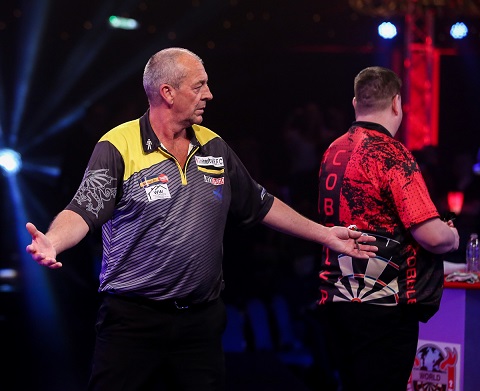 It was a day later than planned but Wayne Warren finally kicked off his title defence against Lee Shewan, throwing six 180s in a sensational come-from-behind 3-2 win.
Lancashire's Shewan was considerably better than in his opening-round victory over best friend Jordan Brooks, putting real pressure on the Warren throw and capitalising on some wayward doubles to win the first two sets.
From that point, however, Warren found his range on the outer ring and his big stage experience began to show. He took the third and fourth sets 3-1 to level proceedings and from there took control, winning the fifth set 3-0 in 49 darts.
Warren, who finished with a 94.77 average, returns tomorrow night to face Cameron Menzies in the Last 16. 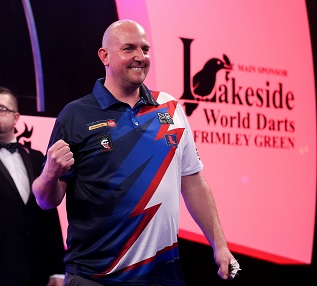 Scott Marsh and James Richardson served up a corker in the opening game of the evening, Marsh sealing a spot in the Last 16 with a quality 3-2 victory.
Despite initially going 2-0 behind, three legs on the spin saw Richardson take the opening set. He seemed in pole position to take the second as well but squandered three set darts at 2-2, Marsh stepping in take out 100 on double 19 to level the scores. Marsh carried that momentum into the third set, which he won 3-0, but Richardson, a veteran of four PDC World Championships, would not go away and took the fourth 3-1 despite a big 128 finish from Marsh to break this throw.
The deciding set was of a high-quality, the first three legs all going with throw before Marsh secured the match-winning break in the fourth, a trio of 140s backed up by an 81 finish. 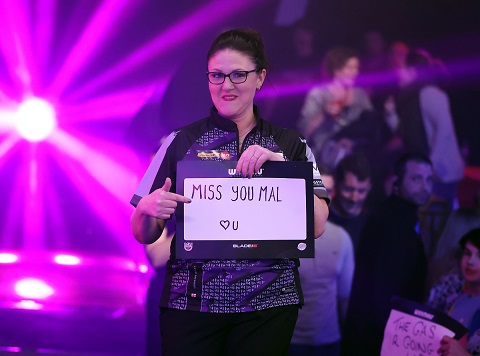 In the sole Women's World Championship game of the evening, Lorraine Winstanley kicked off her title bid with a 2-0 win over Vicky Pruim.
Vicky took the opening leg of both sets but more consistent power scoring and better accuracy on the outer ring proved the difference-maker for Winstanley. She took the opening set 3-2 and the second 3-1, the highlight being a 12-darter that resulted in a 121 checkout.
Former Lakeside finalist Winstanley will meet Tori Kewish, who whitewashed top seed Deta Hedman earlier in the day, in the quarter-finals.