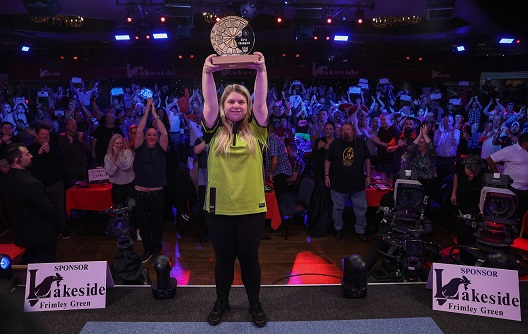 It was a nervy start to the final from both players, Riemann taking out 95 on the bull as the first three legs going on throw. Cairns, who survived match darts from Lauren Stokoe to reach this stage of the tournament, got an important break of throw in the fourth leg to take out the first set 3-1.
Coming out after the break, Cairns started the second set brighter, scoring well before missing a handful of darts to break in the third leg. Despite initially busting it, Riemann took out 72 to take that leg before squandering a number of set darts herself as Cairns levelled it at 2-2.
More set darts went begging for Riemann in the deciding leg of the second set, Cairns producing a great dart to hit double seven and seal an emotional victory. 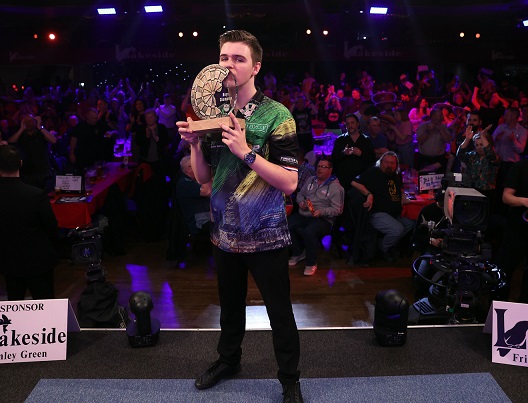 Bradly Roes beat Charlie Large 3-1 to claim the WDF Boys' World Championship on Finals Day at Lakeside.
Large produced one of the shocks of the week in beating former champion Leighton Bennett during Semi-Final Saturday but struggled with double trouble in the early phases of the game. Dutchman Roes punished him, wrapping up the first 3-1 with a 17-darter before taking the second 3-0.
England's Large managed to halve the deficit by winning the third set to nil but his comeback was abruptly ended in set four by Roes, who threw his first two 180s of the week before hitting double 10 to wrap up the title and the 5,000 pound top prize with a 3-1 victory.
Roes now joins compatriots Colin Roelofs and Justin van Tergouw as the third Dutch winner of this competition and also becomes a two-time Youth World Champion having beaten Leighton Bennett to win the JDC World Championship back in December 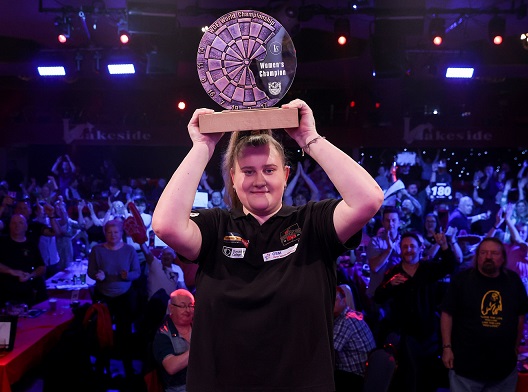 Brilliant Beau Greaves thrashes Kirsty Hutchinson to win 2022 WDF Women's World Championship.
Beau Greaves produced a scintillating performance to defeat Kirsty Hutchinson 4-0 and become the youngest World Champion in darts history by winning the 2022 Lakeside WDF Women's World Championship.
The Doncaster teenager had dropped just three legs in her quarter and semi-final victories and she started the final in similar fashion, winning the first set 3-0 with an average of just over 104. Hutchinson got a leg on the board by holding throw to start the second set but that was as good as it got for her, Greaves throwing five 180s and winning nine consecutive legs to seal a straight-sets victory.
Greaves' final average, 92.02, stands as the best in tournament final history and the third-best in the history of the Women's World Championship.

Neil Duff overcame a slow start to defeat Thibault Tricole in an 11-set thriller to win the 2022 WDF Men's World Championship at Lakeside. 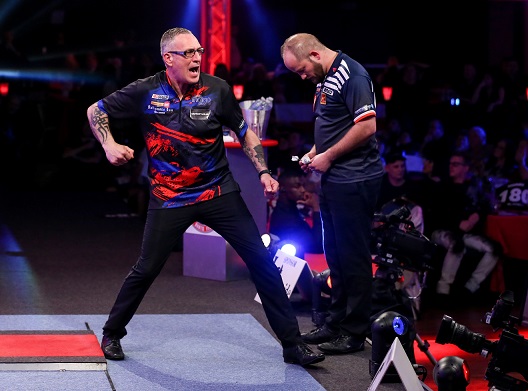 'The Duffman' had been the more impressive player, statistically speaking, going into the final but he made a slow start, averaging just 76 as he dropped the first two sets without winning a leg.
He stopped the rot in the third, nicking it 3-1 and halving the deficit after Tricole had missed a dart to take out 112 and level the set. Tricole was able to re-establish his two set cushion by taking the fourth 3-0 before Duff finally found his range, winning three on the spin to make it 4-3 and move into the lead for the first time.
Duff produced 11 and 12-darters in the eighth set, the latter ending with a brilliant 121 finish, but couldn't take it out, Tricole holding in 13 to make it all-square going into the final break.
Duff, the first Northern Irish player to contest a World Championship final, produced a brilliant three-leg burst, including a 111 checkout, to win the ninth set from 2-0 down and go 5-4 up and within one of victory. 'The French Touch', who'd survived eight match darts earlier in the week, wouldn't go away without a fight though, forcing a deciding set by comfortably winning the tenth 3-0.
He couldn't maintain that standard in the final set though, going 2-0 down before missing a dart at double 12 to keep his title hopes alive. Duff, like he has all week, pounced, hitting tops at the second attempt to take out 50 for the title.
Now the WDF World No.1, Duff finished with an 87.73 average and six 180s. Tricole, who was the first Frenchman to play in a televised darts final, also threw six maximums and ended with an 86.95 average.