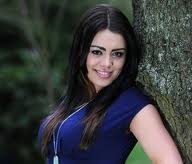 Jade Leigh Hunt was born 1988 in Bathgate. Today she lives in Glasgow and works for the Scottish model agency EGA. Beside she studies social sciences at the West Lothian college, owns an own company for teeth whitening and worked a year in a voluntary capacity supporting a mentally handicapped teenager. 2011 she was voted "Face of Glasgow" and in 2012 Miss Galaxy Scotland.

Her first appearance as PDC walk-on girl Hunt had during the Premier League 2013 in Aberdeen.