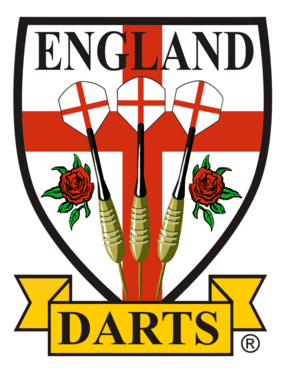 The EDO (England Darts Organisation) was founded in 2007 when the BDO stopped to serve as national Organisation for the sport of darts in England.
So the 43 county members of the BDO set up first a steering committee and then and organisation independent from the BDO though the differentiation was never quite clear. The most important aim of the EDO is the financial support of the English National Team, to enable it to take part in international tournaments around the world. Beside the EDO is responsible to nominate the players for the National Team.
The English National Team takes part in the WDF Europe Cups and World Cups and the British Internationals and the Six Nations Championships.
Beside the EDO organises events the following events: England Open and England Classic, England Masters, England Matchplay, England National Singles, British Pentathlon and the Isle of Man Darts Festival. Beside the EDO organises the qualifiers for the Winmau World Masters. Since 2018 the EDO organises the England Youth Grand Prix and its regional qualifiers.

Bobby George is responsible for Public Relations and Richard Ashdown is the MC.

Vic Sexton already was the Youth Manager of the BDO, Peter Melton the BDO's Nation Team Manager and Tommy Thomson already tried ten years before the EDO was founded to found an independent England organisation.

What will happen now after the end of the BDO with the EDO and how far the founding of the UKDA will affect the EDO at the moment is not foreseeable.