WEDNESDAY October 11 marks 25 years since the conclusion of first tournament staged by the World Darts Council, the forerunner of the Professional Darts Corporation.
The WDC - formed as a coalition of leading players, managers, organisers and manufacturers aiming to breathe new life into the sport at the top level - staged its maiden championship from October 9-11 1992 as the Lada UK Masters took place at Norwich's Talk of the Town and was broadcast on Anglia Television.
Featuring the top 15 professional stars in darts at the time and qualifier Paul Hartshorn, the event was played using the "equal darts" format and saw the players compete for a total of 23,000 pound in prize money.
Here, we take a look at one of the most significant tournaments in the sport's history with some of the key people involved in the Lada UK Masters.

Marcus Robertson, now a PDC Director, was involved with the WDC through his PR company, Craigie Robertson as the organisation began its journey.
"My company was part and parcel of trying to find new TV opportunities for darts with the WDC," he said. "The BDO were part of the WDC too and [BDO founder] Olly Croft was the Chairman of the meetings. "We found some new TV and at that point Olly, for some reason, didn't turn up at the next meeting. We rang him and he said that he wasn't coming if the BDO was not controlling the TV. "That was what the WDC set up for, and the BDO was the main part of that alongside the managers and manufacturers.
"The BDO suddenly backed off when new TV came along, so we were confronted with the possibility that this wasn't going to happen, but - led by [player managers] Dick Allix and Tommy Cox - we decided to do it on our own. "Although theoretically the breakaway hadn't happened and the players did play in the subsequent BDO World Championship at the end of that year, it caused a huge rift. "We went ahead against the BDO's agreement and obviously that did not go down well with the BDO. There were people, and I was one of them, who wanted to try and keep the BDO on board.
"Michael Lowy from Unicorn took over as Chairman of the WDC and we did try and persuade Olly to stay on board but he just wasn't having it. "There really wasn't much more we could do, so on we went with the Lada UK Masters in Norwich. "We were totally and utterly flying blind, and the credit for what got put on must go to Dick and Tommy, but Dick from the creative side saw what was needed in the game along with the broadcasters and we turned it into something completely different.
"Dick and Tommy made that happen. They, and of course the players who were incredibly brave in the face of unpleasant opposition, had the guts to do it and Dick had the vision to present something which in many ways - although it's not quite what we have now - was a big difference from what the BDO had historically done. "The whole benchmark was set by what Dick and Tommy produced at that first event."

Dick Allix - who managed players including Eric Bristow - admits: "It was a struggle - Steve Ryan, who I knew from the music side of my business, and John Raby helped us out with staging equipment so that we had things like big screens. It was all things we'd used on music shows and exhibitions and we wanted to put on a good show.
"The first one in Norwich didn't have huge crowds and we had to ask people to move to certain seats in the crowd to be in camera shot, and even people like me and Marcus sat in the audience to make the numbers up. "We did anything and everything we could to make it work and we weren't going to be beaten."

When the event did get underway, Chesterfield's Hartshorn was defeated by John Lowe in the first round, while Rod Harrington, Alan Warriner, Peter Evison, Bob Anderson, Cliff Lazarenko, Ritchie Gardner and Kevin Spiolek also lost out in their opening games. 1992 World Champion Phil Taylor lost out to Dennis Priestley in the quarter-finals, while Jamie Harvey overcame Eric Bristow, Jocky Wilson knocked out Keith Deller and Mike Gregory defeated Lowe.
The semi-finals saw wins for Gregory, with a whitewash over Wilson, and Priestley as he defeated Harvey 7-3.
Gregory, the 1992 World Championship finalist who Darts World reported was "clearly in the best form of his life", went on to win the final 8-5 against Priestley as he won the 5,000 pound first prize and a Lada car.

The Darts World coverage of the event reported that the tournament was watched by a "knowledgeable, enthusiastic and rather inquisitive" crowd attended the event, with then WDC spokesman Allix saying: "The event has proved hugely successful and shown that the WDC can successfully stage and run a major international tournament for the professionals. "This is the start of the rejuvenation of professional darts on television."

John Gwynne, who commentated on the event for Anglia TV, recalls: "It was played in the equal darts format, and that brought about a bit of excitement and a couple of slightly confusing moments for the referees Freddie Williams and Bruce Spendley. "It was a really enjoyable event. This event was the baptism of the WDC, although the birth of the WDC had come before then when the organisation was set up. "There was a good deal of what I'd call quiet acrimony flying around and it was all very exciting for those of us who were involved in some way or another in the initial breakaway. "For those early competitions, which were recorded and not broadcast live, I used to introduce the players as MC and then dash off to do the commentary. "Myself and Dave Lanning commentated and I remember being so close that even when I was speaking in hushed tones Dennis Priestley stopped in his stride and spoke to me after hearing something I said!"

The tournament wasn't without its teething problems, as marker Graham Fairhurst - now the PDC's Tournament Director - found out on the opening night.
"Myself and Keith Bisby were the markers and at the end of the first leg of the opening game we tore off the scoring sheets only to find that that wasn't a hole in the set to put them through!" he recalls. "We both glanced at each other in panic before folding the sheet and putting it into our suit jacket pockets. At the first break we were able to empty our pockets, and continued that throughout the opening night. "The next day I arrive at the venue and could hear some sawing and banging on stage, and it was John Raby cutting the holes in the set behind the marker's boards to give us somewhere to put the paper during the remaining matches." 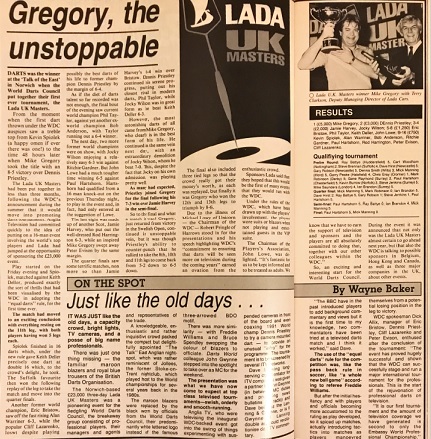 The tournament preceded the sport's split in 1993, which came as the majority of the players who competed in the Lada UK Masters left the BDO to compete under the WDC banner after being banned from BDO events from County level upwards in April 1993.

Rod Harrington, who went on to become world number one and won two World Matchplay titles and is now a PDC Director, said: "I still can't believe it was 25 years ago. "I was the player who was involved right from the start in forming the company and the Court Case and when we started to get the tournaments going you could see that things were starting to work. "Anglia TV came in and Lada came in and that led to other regional TV companies looking at us, which hadn't been happening. "We had all the manufacturers and managers behind us, so that helped. We stuck together for that first event, it went well and the rest is history. "It was a strange thing because there wasn't anything to stay at the BDO for. We just went for it because we had nothing to lose."

Allix admits that the success of that inaugural event paved the way for the addition of the UK Matchplay and Samson Darts Classic to the fledgling WDC circuit in 1993.
"The players at that point were not banned but we had our backs against the wall," adds Allix. "The game had gone into the doldrums and the BDO had lost ten out of 11 televised events. "The BDO had been very remiss and lost events, and Olly Croft invariably blamed the recession but there was no footprint of Olly with the TV companies.
"Me, Tommy and John Markovic were staring at dwindling careers of our players, and so our thought process was that we couldn't believe there was no TV interest. "It was my belief that television fell out of favour from a social point of view, not because the viewing figures dropped. It wasn't Olly's fault entirely but he didn't try and arrest it, he didn't go back and fight for it, he just accepted it. "I went to Anglia and showed them the players we could get, and it was probably a five-minute conversation. I thought it would be hard, but I then mirrored those conversations with Yorkshire TV and Tyne-Tees going into 1993."

Looking back on the Lada UK Masters, Gwynne adds: "It was the initial break, the moment when it became apparent that this was the real thing and not an idle threat. It was the actual breakaway and it was represented by this first-ever tournament. "Others were to follow on other regional TV stations in the years after that, in Yorkshire and Tyne-Tees, but this was the very first one and it was quite thrilling in some ways. "Everybody was upbeat and really looked forward to it, but apprehensive too. It had to go well, it had to be good and it had to be professional and it was. "It was a very good tournament. A few more events followed in the next few years, the UK Matchplay and the Samson Classic as well as the UK Masters.
"We had the quadro board for one event and I think it was important that the WDC were seen to be a little bit different. "One thing that was to their advantage was the quality of those top players - the best in the world - and by 1996-97 we were getting fantastic crowds for the tournaments."


Article with kind permission of the PDC. You can find the original article here: 25 Years On - The WDC's First Event