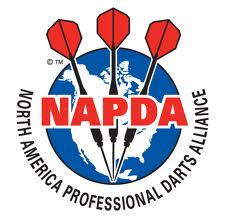 The NAPDA = North American Professional Alliance was founded 2012. The NAPDA basically has two objectives. On the one hand the NAPDA wants to build up a professional dart circuit in North America, a purpose which in the opinion of many North American dart players the ADO, the national North American darts organisation neglected. On the other hand the NAPDA hopes to offer with their tournaments not as good players an opportunity to play the top players and thus to increase their level.
The NAPDA spent a lot of time to come up with a reasonable and universal ranking for all North American players.At the beginning in 2013 there existed only a men's ranking but now a ladies ranking exists as well and two seperate PRO rankings for men and ladies were added. All money earned in NAPDA sanctioned or NAPDA organised steeel-tip tournaments is included in the rankings. All the rankings cover players from the USA and Canada - unlike the ADO ranking which only covers players from the USA.

First one hoped to be able to build up together with the PDC a North American Pro Tour similar to the PDC Pro Tour. But there was not enough response and by now only a single "PDC" event takes place once a year in Canada - where the response is better then in the USA - to find the North American participant for the PDC World Championship. The NAPDA board at the moment consists of: