On 16. July one of the most popular and best dartplayers of the last two decades will celebrate his 60. birthday - Dennis Priestley. He always was the greatest rival of Phil Taylor and almost always was in his shadow - Priestley could only dominate a few years between 1991 and 1994 and only won the very first PDC World Championship against him. Four more times he reached the final and four times he lost to Phil Taylor.
But Dennis Priestely never gave in and till today can be found under the Top 16 of the world, he nerver dropped out though now he doesn't take part any longer in all Pro Tour events.
A few years ago Priestely was taken ill with prostata cancer. The way he handled his illness and the way he played darts in this difficult time certainly even increased the respect one feels for him.
In Spring this year he kindly immediately was willing to talk to me. There is no arrogance in him at all though one can very well feel he's got a lot of personality. He is very good and easy to talk to!!!
And here you now can find the interview I made out of the conversation. 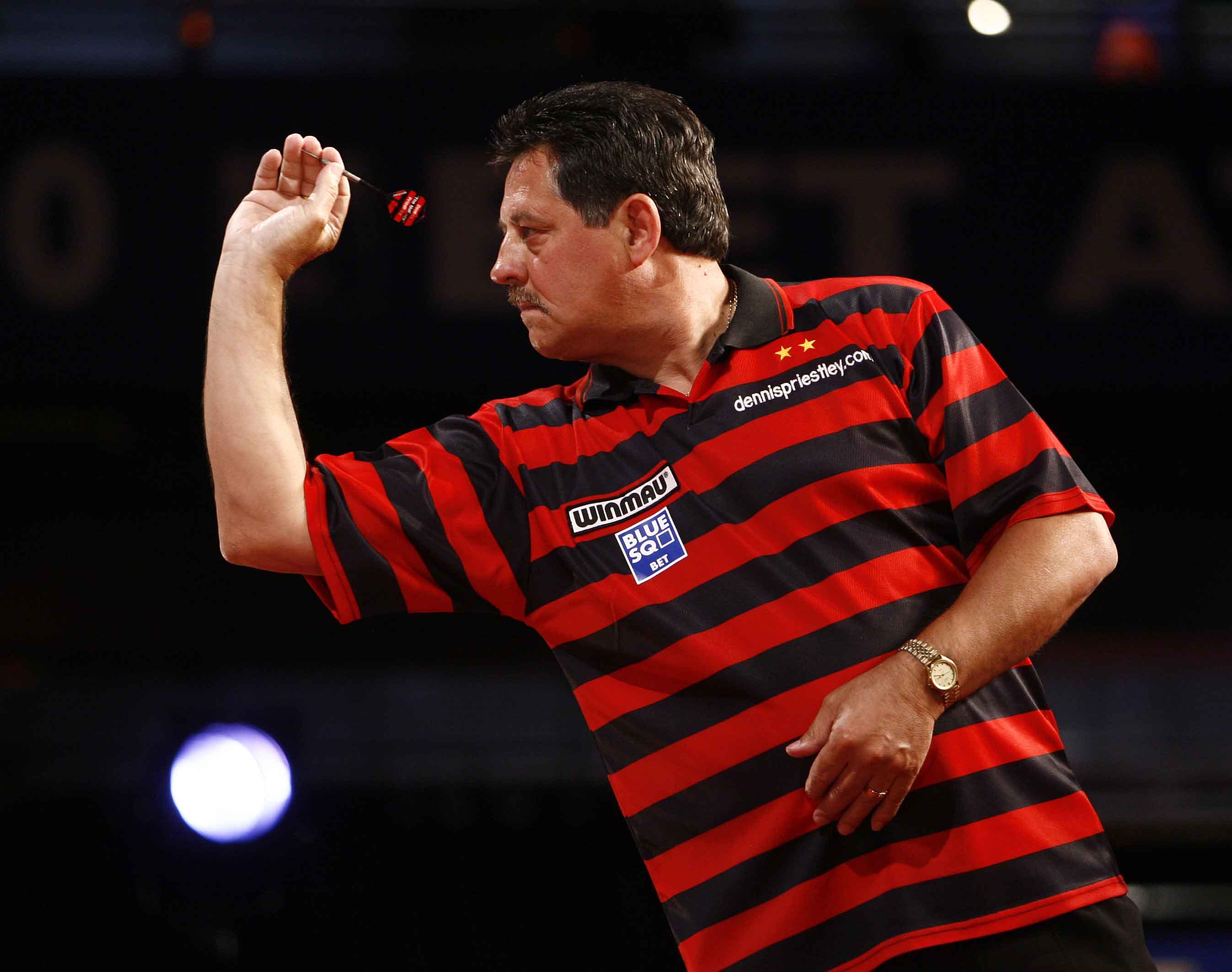 Dennis, you started playing with the BDO in 1989 that's 20 Years ago - you seem to be still motivated how do you manage this?

Well, I would say my motivation is not as strong as it was - I am still motivated but not as much.


And how do you mange it to play all this years at such a high level?

I think I am a very consistent player - to be sure you have to be disciplined and might be professional. And very dedicated. You can't manage it when you are not dedicated and for me there are no nights out over the weekend and no late nights.


For how long are you now a fulltime professional?

I turned fulltime professional after I did win the Embassy World Championship 1991.


And you could live all the time only from darts?

Yes - from playing darts, from exhibitions and presentations.


You entered the BDO 1998 and did win the Embassy World Championship 1991 - I suppose you started playing not only 1989?

No - I started playing in my mid twenties, I first played locally and 1983 I played first time for Yorkshire and 1989 first time for the national team.


So you were already comparatively old when you started playing?

Yes you can say so and I would say those starting younger definitely have an advantage; they just have more time to develop and grow. 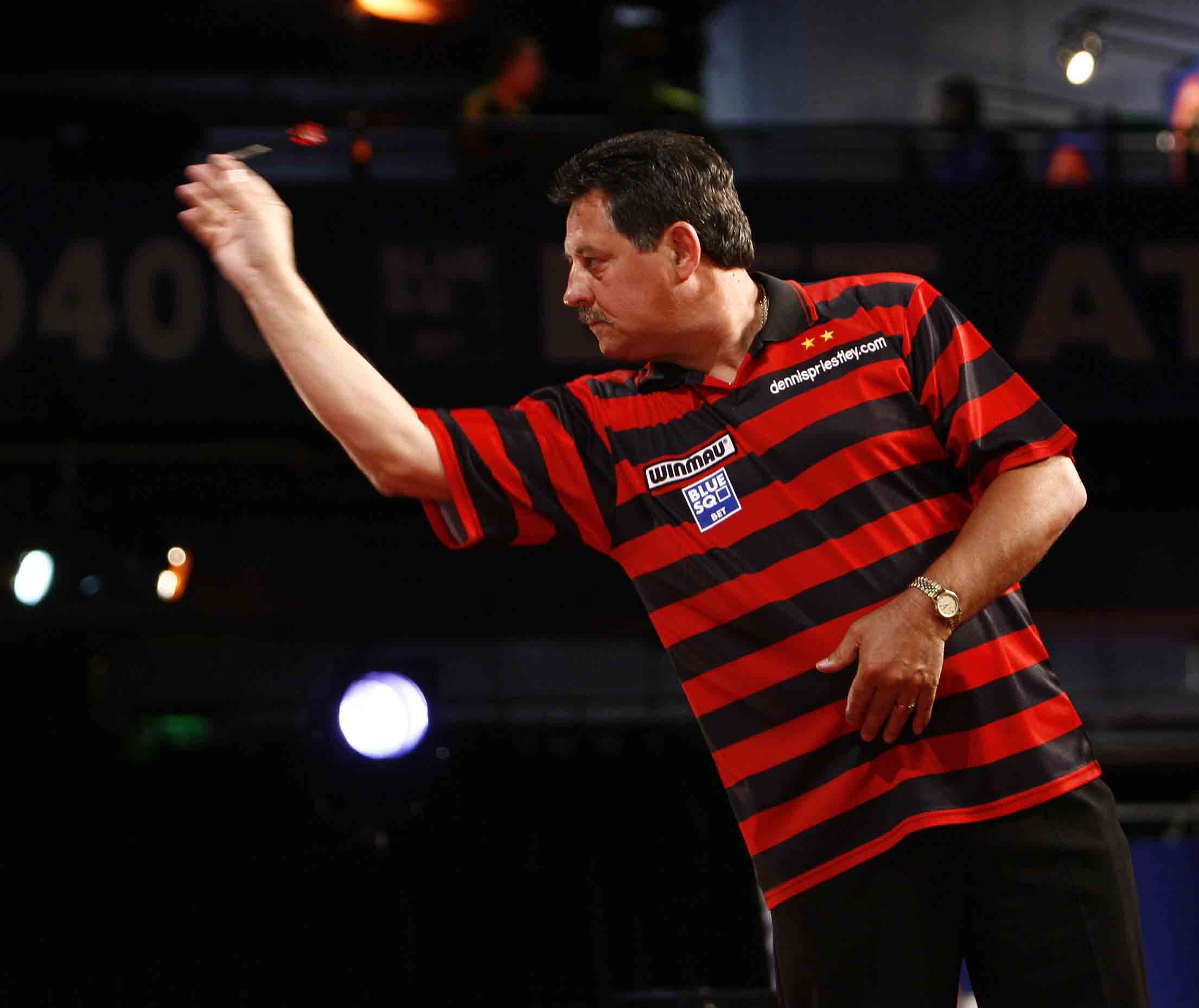 Of course I did know Eric Bristow - darts always has to have bad boys like Bristow or Peter Manley and the good ones like John Lowe. But I wouldn't say he was an idol for me, my idol always was Leighton Rees the gentleman of darts.


You were one of the founder members of the PDC - how did the split happen?

In the 1980s there was a fall in darts, the BDO lost a lot of televised tournaments. We players asked they should do more for us and bring us back on TV. But nothing happened. So in the end we split. It was a very hard time for us all and our families. We didn't earn much money first and there was the risk to lose our houses. Dick Allix and Tom Cox did help us on and managed everything in the beginning. And later we brought in Barry Hearn.
It was the time all those cable television companies started to appear and it's unbelievable how good sky now is in televising darts.


For me it looks the BDO still has got the same problems..

Yes - they didn't move at all since this time and probably they will not before all this old people are gone. It's very sad to say such a thing but I really think nothing at all will happen before Olly Croft is dead - there will be no change. And I can't see there is some one who could succeed him. It is not good for darts all over the world - Olly Croft still has too much influence on the WDF as well.


Do you think the BDO will survive?

Oh yes, I think it will survive but it will be only a shadow of it's former self.


All those years you played in the PDC you could only win one PDC World Championship - the first one. How frustrating was it to lose four times in the final against Phil Taylor?

It was rather frustrating - giving your best but not be able to win. But at least he had the same problem with me in 1994.


Without Phil Taylor you would have the number 1 - does that still bother you?

Of course it did - though there are a lot of ifs and whens, but it doesn't bother me now-a-days.


For several years you and Phil Taylor shared the price money..

It was reasonable then - the price money was not as big and we all really had to stick together in those years, we travelled together, we shared the expenses and the price money. You wouldn't be allowed to do it nowadays as every kind of gamble is forbidden by the PDC rules.


How would you describe your relationship with Phil Taylor?

I would say it was both rivalry and friendship. I have to say today it was a fault to let Phil get too close.


Would you say there is a lot of camaraderie between the players or is there nor room any longer for this?

Oh - friendship and camaraderie of course still exist but all in all I would say they don't have such a lot of fun together any longer.


How much changed the dart scene over all those years?

The overall standard is much better - there are much more really good players now. 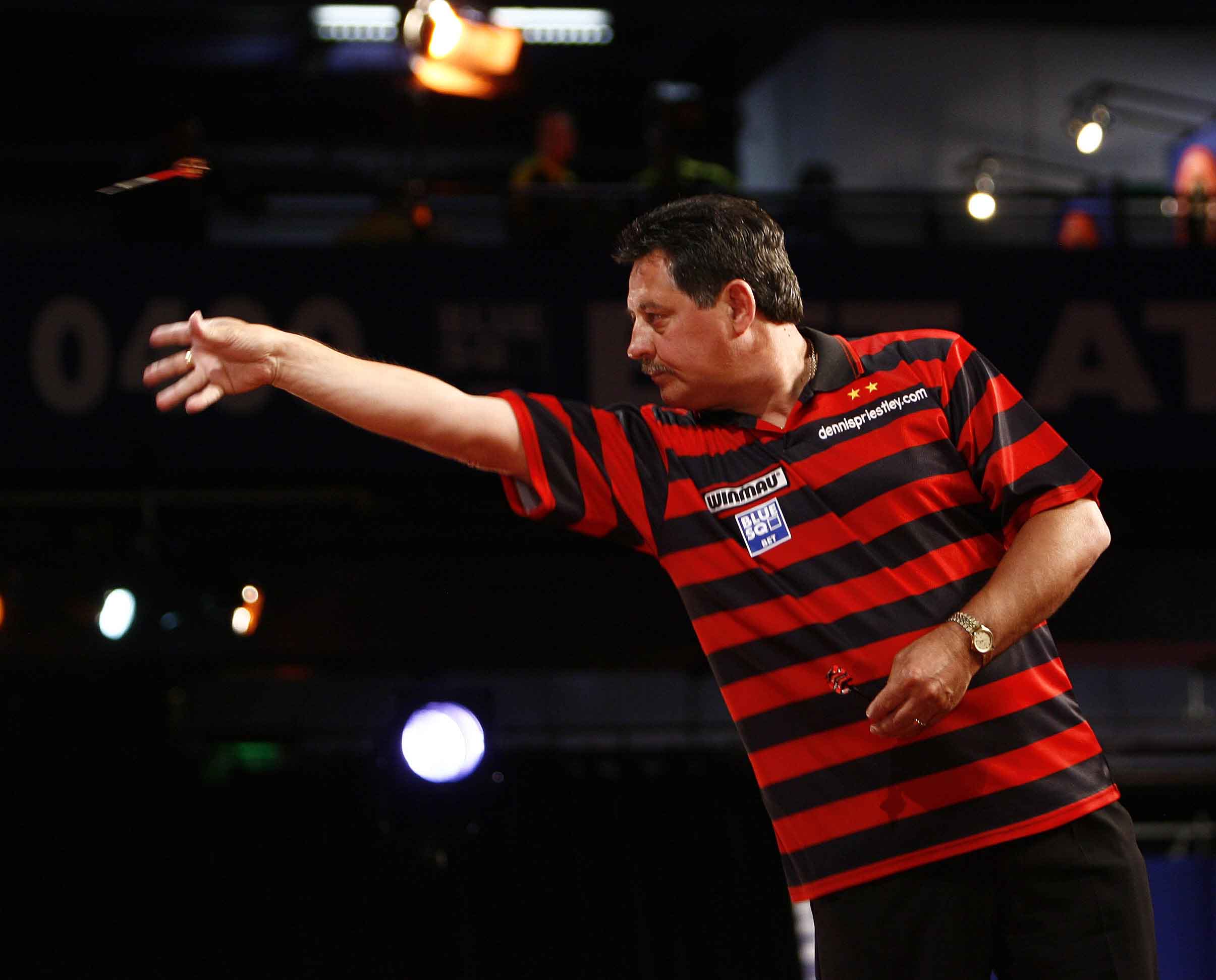 Why are the players better?

I think they all practice a lot more, it's all more professional. The fitness is much better - they go to the Gym, they go swimming that's very good too - all that helps the standard.


The mental part is very strong in darts. Now for the first time a sports scientist is working with a dart player - could that be the future of darts?

I can well imagine that. When you have to play at such a high level consistently that really could be very helpful. That and doing something for your physical fitness.


You are well-known and might be not always well liked for your slow throw - did you always throw like this?

Always. I think I tend to play faster now which is not good for my play. I concentrate for my first dart - the first dart is the crucial one. The other two's are then no problem for me.
I always think those quick throwing Dutch players will never manage to get over a certain level with such a throw - they can get very good but will never be really top level.


Would you say getting older had an influence on your darts?

Yes, it certainly has. Those long phases of concentration get more exhausting. And - I never had any problems with my throwing arm but I feel my legs and feet now. I sometimes think though I always was fit in my younger years it would probably have been better do more for my fitness as players today do.


Is the travelling more exhausting? 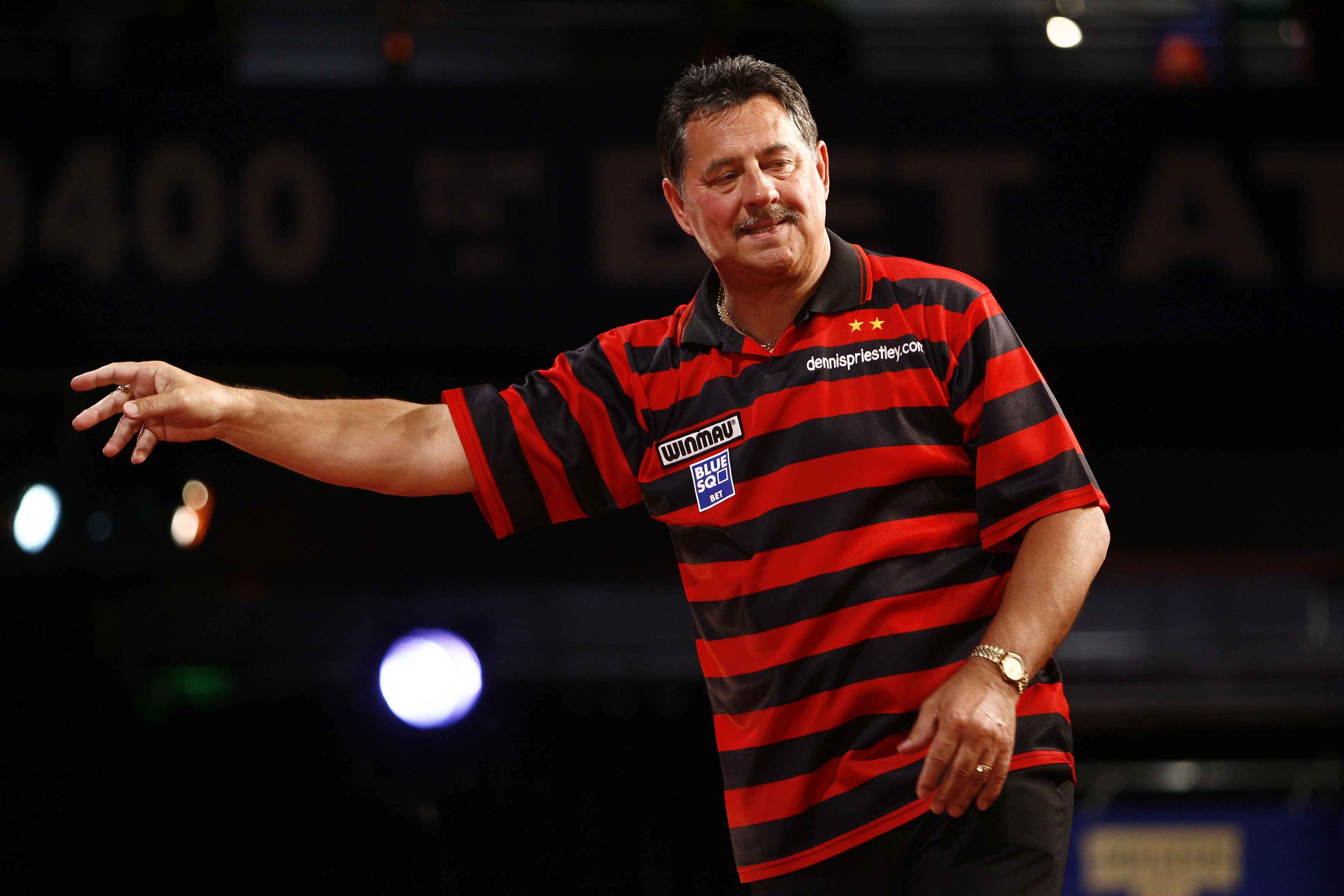 What is it that fascinates you most in darts?

I am most fascinated by all these different people - they are all different characters. It's great to meet them all and to talk to them all.


What would you say is your special strength?

My nature I would say, my temperament. Not to bother too much. One has to learn to lose first before one can win. There are players around who bother too much when they lose like Baxter or Walsh - you'll never get top level or a winner by this.

Yes, I really love it. I always was good on stage. I seem to slow down even more and that's good for my darts.


What do you think of this massive crowds in Premier League now?


And how do you like the floor tournaments? Was it a good idea to play them without spectators?

They are very tiring and exhausting for me. I was not one of the players who didn't want spectators any more. I can't see how in such a large venue as Wigan for example a few spectators could do any harm. Might be it was because in Bristol there were some problems.


Even when you were ill you played some great darts -

Yes but it was even more tiring. All that treatment made me more exhausted mentally and physically.


What would you say makes a good dart player?

Well, I think talent is important. But you've to put in nevertheless a lot of practicing.


Do you still practice?

I really do. When I am not working I usually meet with friends and we practice together.


You announced you will withdraw from darts this year after your 60. birthday - do you think you can live without darts?

I'll withdraw slowly. I'll play those pro tour events nearby; I'll not travel as much though I'll travel to Canada because we always meet friends there. When I fall out of the rankings for the major tournaments I am out. I still will do exhibitions and presentations. But there really are a lot of things I want to do then outside darts - it will be a much easier life. 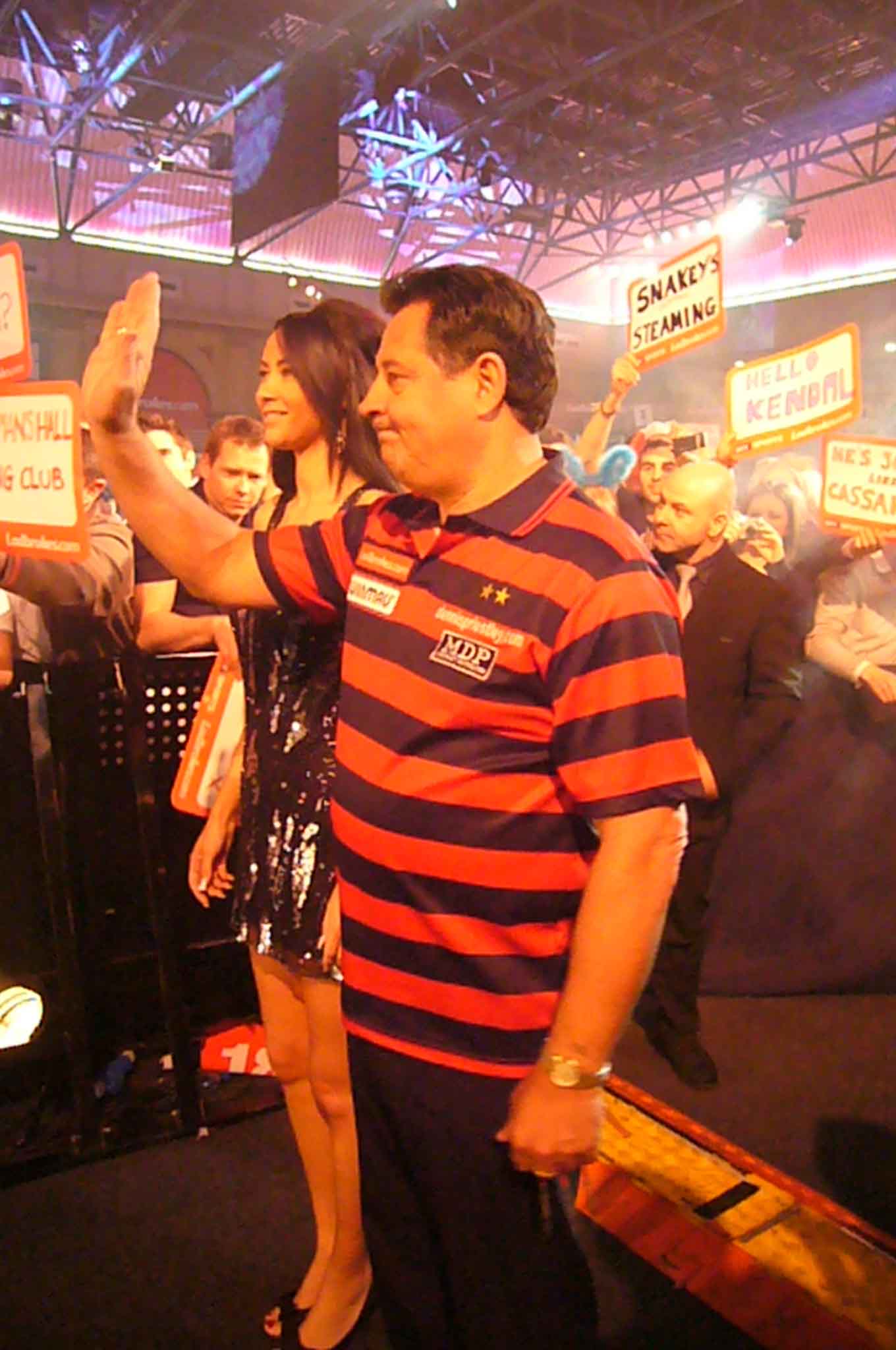