Francis Hoenselaar - born 1965 in Rotterdam - to be sure is one of the best known female faces of the sport of darts. The "Dutch Crown" 15 times won the national Dutch title, several times won the Antwerp Open, the Dutch Open, the Denmark Open, the Welsh Open and die German Open, as member of the Dutch team once the WDF Europe Cup and four times the WDF World Cup, three times the Winmau World Masters and for mayn years dominated together with Trina Gulliver the BDO Women World Championship. Most of the times Trina Gulliver defeated her in the final - only once - in 2009 - Hoenselaar managed to win the title herself. So she was invited to the PDC Grand Slam der PDC during which the following interview too place.
After this success she more and more withdrew from international events. 2012 she injured her hand in a scooter accident and due to this end of July 2014 announced she would quit darts altogether. 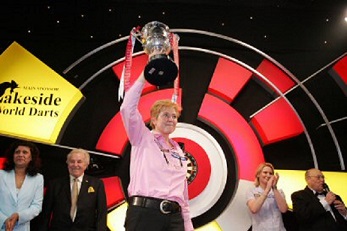 Frances you are a sporting woman, is darts for you a sport as well?

And how would define a sport and what sporting criterions darts has got?

You are a player who started playing before the darts boom aroused by Raymond van Barneveld in Holland, what did darts look like there when you started and how got you involved in the sport?

My brother had got a board he did hang up in the landing and then he told me what one had to do and how to throw and that one had to finish in 15 darts. So when I first went to the pub I was rather astonished to find out 15 Darts was quite a high level.

Were there many women then playing darts in Holland?

Yes, there were a lot around but not on the international level.

And how looks the dart scene now-a-days, one often hears darts in Holland is in some kind of a crisis?

It is very difficult without any TV exposure. And it is not much in the press any longer either. How can new people be drawn into darts without that?

There are quite a lot of talented young male players in Holland, what about the female players?

We have got some very talented good female players too. They learn very fast and we build them up. You have to do that, there really is a lot for them to learn. Only look at the young male players like Klassen and van Gerwen, they were more or less thrown into the cold water and had no time to learn - it is very difficult for them now.

For long years you and Trina Gulliver dominated the sport, are you rivals or friends by now?

Oh, we are very close friends, really close. We are always in contact, talk about everything, and celebrate together. It's such a pity I can't be with her for her 40. birthday, I have to play a tournament.

Is ladies darts appreciated in Holland or is it always in the shadow of the men?

It always was and still is in the shadow of the men.

What are your ideas how one could change it? Certainly women like Mike de Boer or Anastasia Dobromyslova arouse attention but did or do they help as well?

Well - I started this with the ladies darts association but it turned out to be very, very difficult. And I would say of course women like Anastasia do help.

What did you think when Anastasia changed?

I thought she was very courageous!

Has a female darter a chance at all in the PDC?

My answer to this is yes, of course. It might be hard but of course there is a chance.

What did you think about Barry Hearn's offer to play in the Grand Slam?

I immediately decided to play. And I really enjoy it, It's organised very well, the people are all very, very friendly, all the officials, the players. The venue is great, the practice setup is great and the crowd received me kindly. I am already looking forward to play here again next year.

How important is experience for playing on such a level?

Experience is really very important and the main reason while we have to slowly lead up the young players. 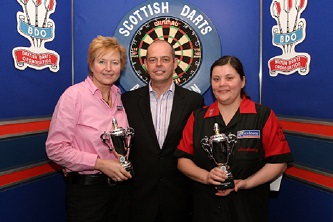 Would you like to be able to really compete with the men or do you prefer separate ladies tournaments?

I think in the end I like to be able to compete with the men from time to time but I prefer separate ladies tournaments.

Would you say women are as competitive as men and have as much bottle and ability to assert themselves?

Women are rather competitive as well. What at least I myself have to fight is that I am too emotional. And I would say we women have more ups and downs in our lives while men seem to be to me much more balanced or straight forward.

What for you is the real difference between a female and a male darter?

I think the answer to this is that women and men just are different. We women probably have to many things that hinder us to exclusively occupy us with darts - there are too many other things we have to do beside this, that we have to do. .By this might be the men are more focused and in the end more consistent. They can concentrate on only playing darts, there is no household, no family, they have to look after.

The WDF/ BDO offers a much bigger variety of different tournaments, team competitions, doubles, mixed, the PDC only offers single 501. Do you feel single 501 is in the end the best of all? Is the rest only for fun?

For me that's something that has to do with learning and experience as well, there are tournaments for players on all levels. So not so good or not so experienced player can win something as well, that is very important and encouraging.

2009 for the first time you managed to win the World Champion title, how much did it mean for you?

It was an interesting experience, it really tops all other tournament wins. People still congratulate me on winning it.

Who do you think will be your most dangerous opponent in 2010 World Championship?

I wish Deta Hedman would win it, of course I would like to win it again. But should I not win it I would wish Deta could. She is around now for such a long time already and till now never had the chance. She was my idol when I started to play. She's such a great player!

You only play matches over a rather short format during the World Championship, would you prefer a longer format?

Of course I would prefer a longer format, we all would prefer it. It is not we never tried to get it. This short format is really hard. You've to come in immediately otherwise you don't have a chance at all. It's ridiculous. And at the World Championship you only have that single match. In other tournaments were you play some matches one after the other you at least have the chance to develop.

And what do the women play in other tournaments? The same format as the men or is it always shorter?

It's always shorter. And not only that. Can you believe during the Winmau World Masters we had to play at 10 o'clock in the morning? Never ever they would expect that from the men. And is always squeezed in between the youths.

Very rarely one can see in Germany parts of the ladies World Championship, how is it in Holland? And is it really people are not interested to watch it?

I think people are really not interested at all..

And how are the relations between male and female players? Do male players respect the females ?

Oh - that is really good. They at least take us serious!

Do you practice much?

Of course I practice. When I am all alone in the house I switch on music. I've a lot of music on my I-pod. I like Jazz and a lot of other music but nothing aggressive, calmer music. I've got an own room, my bedroom upstairs.

I had one for some years but now I practice alone.

What fascinates you most in darts and what keeps you motivated?

For me it is the challenge playing on stage. You have to fend for yourself, is almost like being naked up there, there are only the board, your opponent and you, you can't hide anywhere.

Is there anything from the other sports you do you could use in darts or does there exist some kind of common ground?

That is difficult to answer. Perhaps that a lot of sports need good hand-eye coordination and fitness?

Would you say all those new practice methods and all the knowledge of sports psychology could be used in the sport of darts as well?

I am very much interested in all this. I read everything I can get about it and very often I feel me confirmed when I read some other sports feel and think like I do. When for example I read Tiger Woods does and thinks the same I do.

Do you do some kind of mental practice?

Well for a tournament I always try to have a strong arm, not tense but to feel the strength in my arm. And I always go for five minutes to the toilet. I've to be alone for a short time and that's the only place were I really can be alone. I need that. 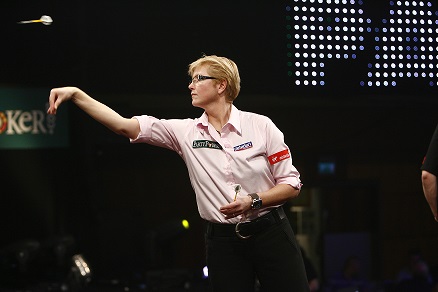 And how do you prepare for a tournament?

I always do a special preparation for a tournament. Especially for the World Championship.

Have you got a sponsor and how difficult is it to find one?

It is very hard at the moment to find one in Holland. I still have got data darts.

Could you ever earn at least a part of your living with darts?

Yes, I managed that. You see I always had my own business. That's something I am really good with and that helped me in darts as well.

What is your special strength and what your weakness?

That is hard to answer. Perhaps my strength is that I am still around, that I still play on this level and that I still enjoy it? But I've got a kind of arthritis, that means I just can't play when it is cold. It affects my hand.

Have you got any goals for your darting future?

It is important to always have a goal. My short time goals are to prepare good for the World Championship. To defend the title. And my long time goal, that's to play as long as possible on this level.