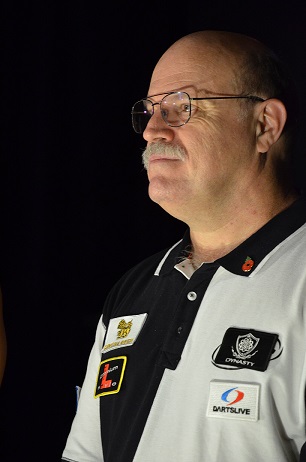 Larry Butler - born 1957 - is by now 58 years of age - three years older than Phil Taylor. But he still is one of the most successful American dart players, might be the most successful. Beside countless North American tournament wins both steel-dart and soft-dart he had some international success as well. He was one of the North American players who was invited after the spilt 1993 by the WDC (today PDC) to take part in their tournaments and he played from 1994 - 1997 the new PDC World Championship reaching the quarterfinals in 1997. But his biggest success he could celebrate in 1994 when he won the World Matchplay in Blackpool. Till today he is the only American player who ever won a major tournament on British soil.
After 1997 Butler disappeared from darts for around 10 years. He reappeared again in 2008 at the Las Vegas Desert Classic. In 2009 he qualified for the PDC UK Open and in the same year threw during the PDC Players Championship in Las Vegas his only known tournament nine-darter. After the PDC had withdrawn from the USA Butler played more WDF/BDO tournaments but took part in the PDC World Cups together with Darin Young as Team USA.
2015 was an extremely successful year for him - he won the first season of the new American CDC against all other North American top players, qualified by the BDO Grand Slam Qualifier for the GSOD, reached the final of the North American qualifier for the PDC World Championship 2016, was invited for the BDO World Championship 2016, reached the singles quarterfinals of the WDF World Cup and caused an upset in the Winmau World Masters by eliminating impressively some of the BDO top players before he lost in the final to the BDO number 1 Glen Durrant.
During the Grand Slam we met for the following interview. 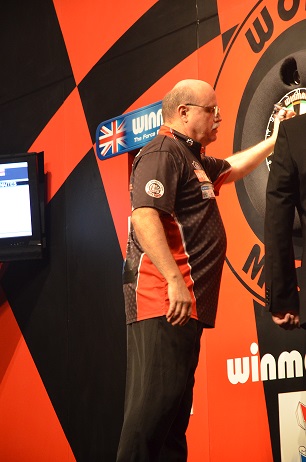 Larry - beside meeting you several times this year I last talked to you during the UK Open 2009 in Bolton .

Oh yes, I stayed sometime in the UK that year. I stayed over for seven weeks with my friend Ronnie Baxter. In this time I played some of the UK Open Regional/ Players Championship weekends and managed to qualify for the UK Open. But I lost first round.

At that time the PDC was getting more involved in the USA - but in the end it was a failure.

I think it was a financial problem. All the venues and hotels which were chosen were just too expensive. So people decided not to take part in the tournaments and to save the money. It was not possible to bring the families along either - it really was too expensive.

Than the NAPDA was founded.

Yes that's true. The person behind the NAPDA is Canadian Bob Sinnaeve. Till it started we had separate ankings in the United States and in Canada - a problematic situation as Canadian players play in US tournaments and US players in Canada. Now we have got a unified ranking for Canadian and American players. 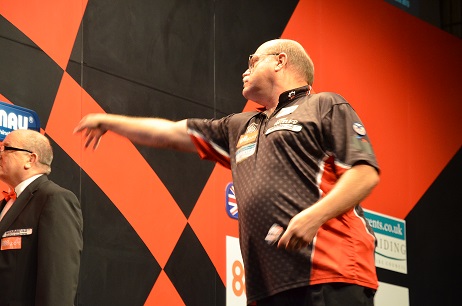 At the moment one hears that the ADO - the national American organisation - is in a crisis.

The most controversial point is the ADO office which cost a lot of money over all the years of its existence while no one has an idea what merit it has and what it really does .
But of course the ADO does a good job as well - it was the ADO which organized and payed when we took part in the World Cup recently.
Our team manager Steve Brown as usually did a good job as well and beside is a very "valuable" team manager as he is a good player and could always fill in should one of us couldn't play.

Might be the USA is just no country for darts?

Oh - of course it is. Darts is a popular sport there.

This year another endeavor started - the championship darts circuit. Do you think it will survive and help darts in the USA?

To tell the truth I am not really convinced yet. It is more or less only for the elite players so at least at the moment doesn't produce new players or get not so good players more interested in the sport. 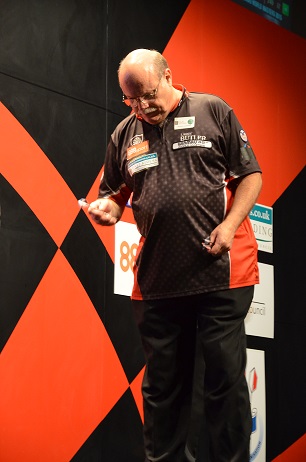 You played the CDC and won it this year - how hard was it?

I won two of the events and the final. It was not easy but the head of the table had to withdrew from the final.In the end it was - as always - Darin Young and me. There is not much young talent around either.

That seems to be one of the main problems of the sport in the USA - the ADO doesn't offer much for the youth.

That is only too true.and that really is a problem. I think it is a little bit better in Canada. I am not quite sure whether the youth is not interested or whether there are not enough offers though I think darts was more popular when I started to play.
One of my sons plays darts and he's quite good. He already won matches in the next age group. But I certainly invested a lot more money in baseball for my children than in darts.

Do you think soft-darts could help the youth to get more interested?

I can imagine it as interested as the youth is in computers and all kind of machines.

You play steel-darts and soft darts with some success - what do you prefer?

To be sure I prefer steel-tip. But I played a lot of soft-darts as well. I even won the Bullshooter a couple of times.

After the World Masters you travelled to Shanghai to play in a Dartslive event there - do you need to adjust from steel - to soft darts?

No not really - I don't feel there is a difference. In this case the problem was more the travelling because I felt the jet leg. We played in a team event at first and I almost couldn't keep my eyes open. 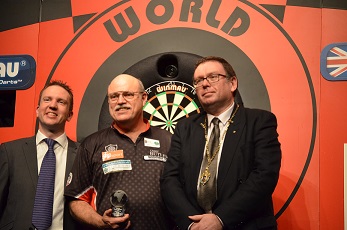 A lot of serious steel dart players feel soft-darts is too easy - would you agree?

That's true it is very easy at least on the American electronical boards. But it is easy for everybody what makes it rather difficult.

How far spread is electronic darts in the USA and has Dartslive a big stake in this?

It is fairly wide spread but Dartslive till now plays only a very small part in it. Electronict darts in the USA is dominated by Arachnid. A lot of pubs and clubs where soft darts is played are by contracts bound to Arachnid - it is not easy for Dartslive to spread out.

You travelled from Hull to Shanghai - than on to Kemer in Turkey for the World Cup and then back to the UK for the Grand Slam - is it not exhausting?

Yes of course it is. And I don't like travelling very much anyway. But I had some days here in Wolverhampton to recover. 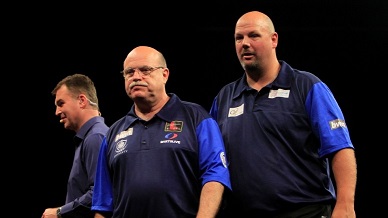 And how do you pass your time off in between the tournaments?

I love to visit all those shopping centres here in England. And in Turkey they sold a lot of wooden goods very cheap - rather astonishing artisanal things for example a small folding table. I sent already a parcel back home. I've got three children - they all get souvenirs.

How much time you can spend at home with the family?

Not enough. I really miss my children.

Do you still work when at home?

I even work when I am underway. I've got an own IT company - that means it is easy to take time off. And I can work from wherever I am.

While a lot of players seem to have a problem to motivate them and no longer play their best or even withdrew you still look motivated and play great darts. How do you manage this?

There are not many around whom I know from past times - that's true. Some just stopped playing, there are a few who prefer the commentators box now-a-days.
I think what helps me a lot is that I enjoy playing very much.

Do you think you played better when you were younger?

I think that I was a stronger player when I was younger - before I took that long break after my father died. But now-a-days I really only play for pleasure while than I played for the money. And of course I am much more experienced by now which helps as well.
I think my best time was in the 1990s when I did win and play quite a lot of tournaments in the US. I played up to 30 tournaments a year that were 30 weekends traveling and away from home. 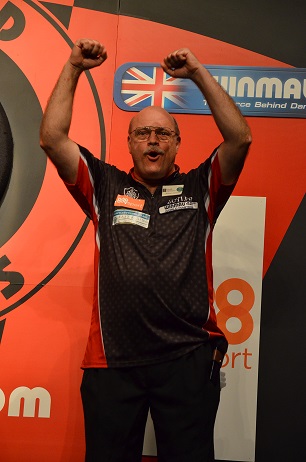 When you took that break - didn't you play at all?

No - I really stopped playing completely for around 10 years. I only returned to play when the PDC came over to America with some new tournaments and I thought it might be worth trying with such a lot of price money around.

Are you still nervous on stage?

No, not at all. That's another advantage I now have. I always had to fight my nerves.perhaps that's another reason why I can enjoy it now so much. I've got other problems sometimes on stage now - my arm seems to tire more easily.

How do you manage to stay fit?

There is not much I do but I like to walk and I walk a lot. I always have a pedometer in my pocket.

Would giving the PDC circuit another try be an option for you?

Well I played it many, many years ago. But no - I don't give it a thought now-a-days. I would have to move here and I can't imagine doing it. I would miss the family too much.

Was the Grand Slam your last event in Europe this year?

Well - not really. I'll have to return to play the World Championship in Lakeside. When I was younger I always wanted to take part. There always was the option they could invite two American players every year. But I only was invited once in all those years.

You are the only player from America who ever won a tournament in the UK.

Yes, I won the World Matchplay in 1994; I beat Dennis Priestley in the final. And 1997 I reached the quarter finals of the PDC World Championship.

Oh yes, I try to practice every day. Often Doubles and Triples around the board. It's not always easy though to find a place to practice when I travel.

Would you say players are better now-a-days than they were when you started to play?

No - I don't think so. Perhaps a little bit. But to be sure there are a lot more good players around today! 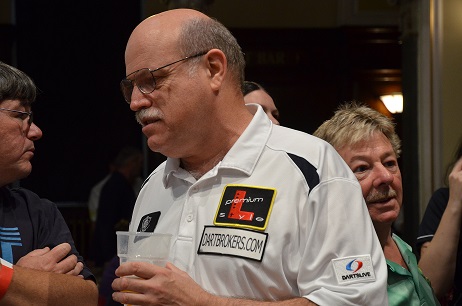