Martin Schindler - born 1996 - was 2014 German Youth Champion and took in the same year for the first time part in the PDC Unicorn World Youth Championship. Besides he played mostly BDO/WDF tournaments and was a member of the German National Team. 2017 he took part in the PDC Qualifying School and got a Tour Card. Already in his first year on the PDC Tour he qualified by the Pro Tour Order of Merit for the PDC World Championship 2018 but lost First Round against Simon Whitlock. 2018 was a good year for Schindler again. He won two Development Tour events, stood twice in the semifinals of a Players Championship and qualified for the UK Open, the European Championship, the Grand Slam of Darts, the Players Championship Finals and the PDC World Championship 2019. Besides he reached the final of the PDC Unicorn World Youth Championship where he lost to the reigning champion Dimitri van den Bergh.
During the Grand Slam I used the chance to interview him. 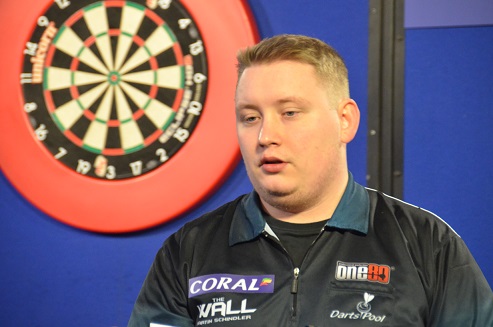 It looks you had a real run recently when you played yourself into the final of the PDC Unicorn World Youth Championship and after that qualified for the Grand Slam as well! Did it help for the qualifier you already were in full swing?

I think it helped but there were other factors as well. I took a break the weekend before and did do nothing at all. That was the right decision. And I was on the day very clinical and very good on double 16.

What did you feel was more difficult for you - the youth event or the Grand Slam qualifier?

The Grand Slam qualifier was more difficult. I had to come down for it first and come to terms with my success in the youth event. And I had to try to keep or regain my concentration. But I was quite lucky with the draw.

And what made you happier?

The Grand Slam is not the first big PDC tournament for you - do you nevertheless feel nervous?

I don't feel nervous at all.

What do you think about the format?

Might be the format plays a part as well, you are really more relaxed in this format. I like it.

Which format do you prefer - round robin, sets or legs?

I feel comfortable with round robin. The set format is okay as well, timing is essential in it. Legs I think are most difficult.

How well do you know the other players in your group?

Scott Mitchell I don't know at all. I played already several times against Stephen Bunting. With Mensur I share the language and we talked a little bit from time to time but I can't say I really know him. 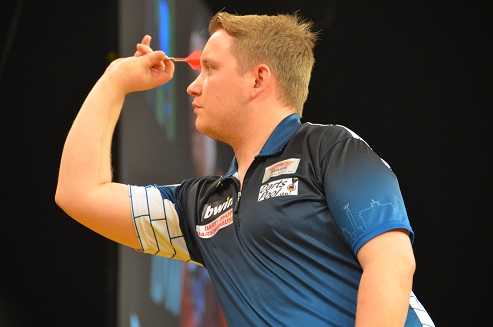 Does it matter for you at all who your opponent is? And can big names still intimidate you?

No - to both. It matters no more for me.

Have you got some kind of bogey opponent?

Did you prepare especially for the Grand Slam or do you have a special before tournament routine?

I didn't do anything special - only my daily routine.

Do you find time at all with such a lot of tournaments to work in a job?

No, by now I am a full time professional. I really have no time at all for a job. Besides I would need a very flexible employer.

And do you find enough time to practice?

Time is not the main problem. It's motivation which is the problem. When I played the whole weekend darts I sometimes have a problem to motivate myself in my "spare time" to hit the board as well. I just don't want to play darts all the time. That's quite similar to other working persons who prefer to do something else at the weekend as well.

Most of the time alone. Each day when I am at home I practice for around an hour. I practice the doubles and the finishes a lot and the possible ways to finish from 121 down. I play Around the Clock as well. 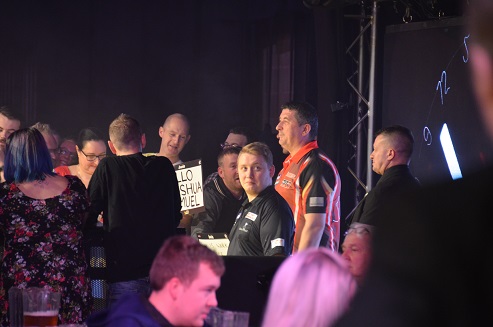 Have you got a practice plan and somewhere in your environment a coach, a mental coach or a manager who helps you in your darting life?

I don't have a practice plan though I put some kind of routine together myself. You can't help to hear what other players do. That really depends on the player. There are players who practice the triples all the time - for me it's the doubles.
And I've a manager who accompanies me. He books the flights and looks after everything right up to what I eat. We talk a lot, he helps me to come back to earth and he is a good friend.

What do you think about sport psychology and scientific methods in darts?

I not only have a manager but a mental coach as well. I think it is very important to have somebody you can talk to.

At the moment it looks your career knows only one direction - upwards. Do you know the reason for it?

I think one of the reasons probably is that I was in a slump at the start of the year - probably not many will know it. I learned a lot - for example patience and stamina. And of course by now I have some experience.

You came into contact with the sport in your family quite early - do you think it was an advantage?

I think it was not so early to start with 15. But it was really helpful I could always play with and against my father. Otherwise I might have got bored and would have stopped to play.

You decided quite early for the PDC and not the BDO-why?

I played for some time in the BDO and I liked it. What I didn't like at all was the short format they play in there. It doesn't show who really is the better player. The results look to me often random.

Did you play in BDO/WDF Youth events?

I took part in the WDF World Cup, the Europe Cup and in the Winmau World Masters. 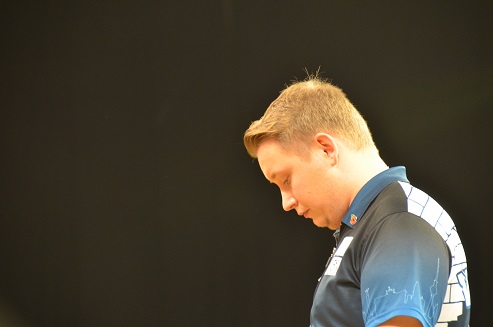 Together with Max Hopp you were a strong team in the PDC World Cup - why are you so strong together?

We are really good friends which helps the team spirit. We talk a lot, we make arrangements and we cheer on one another.

And who is for you the better player? Or is there another player who might be the number 1 in Germany?

Max to be sure is the better player. But I am not interested who is the number 1 in Germany - I am more interested where in the World Ranking I am placed.

Are the German players when you are in England more a group? Or are you all on your one?

I for example share my room always with my manager. But we usually sit all together and exchange views.

This year you played for the second time Superleague Germany - have you got the impression it improves your game?

I would say it to be sure improved my game. And you play there always against those players you have to play in the European Tour Home Nation qualifiers. It helps when you know you opponents well.

Will you take part next year again?

Yes, I will take part whenever it is possible.

How do you finance yourself and all the travel in Germany and to the UK? Have you got a sponsor? Or do you earn enough price money by now?

I have got a sponsor - until now it was one80 but I changed recently to Bulls Netherlands - but most of all I finance by my price money. My manager looks after everything and he's payed out of the price money as well.

What do you think are your costs for a year on the circuit?

I would say it is a five-figure number with a two in front.

That's quite a lot - what would you recommend to players who think just to try Q School?

You shouldn't take part just for fun. You should be aware of the costs of the tour and of all other requirements before you register. When you are not able to finance it or when you have got a job which is fulfilling you and which you don't want to give up it is not worth to try.

What darts do you play with? And do you change your darts often?

Well, I just changed them. Till now I played with one80's in 23 g. Now it will be 23 g darts from my new sponsor Bulls Netherlands in 23 g which will be on the market on 26. November. The barrel is not quite a straight as before - it gets a little bit thicker in the middle.

Not really, I am rather consistent in this respect.

Are you a player who after the matches, especially when you have lost, tries to analyze to find out what went wrong?

I always talk about them with my manager. I think it makes sense.

Have you got strengths? Or weaknesses?

I am a very bad loser...; my strength probably is my callousness which seems to be natural.

The situation in the matches and how it changes.

Have you got other interests or hobbies outside of darts?

I played table tennis and football in the past. I don't play football any longer as the risk of injury is too high. But I am still a football fan. My favourite clubs are Hertha BSC and FC Barcelona.

Do you have a favourite player as well? 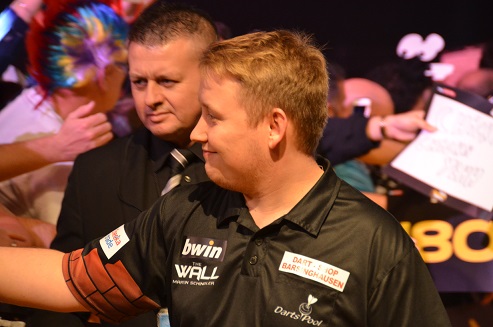