Paul Lim whose full name is Paul Lim Leong Hwa, is since 1981 part of the international darts scene and represented over the years Singapore, Papua New Guinea and the USA in international competition. 13 times he took part in the BDO World Championship and there in 1990 threw the first ever World Championship nine-darter which made him world famous. 1994 he was among the players involved in the split but never really was successful in the PDC though he qualified seven times for the World Championship .- the last time in 2013 as Dartslive Soft-Darts World Champion.
Lim won a lot of tournaments in Asia and is there and in the USA a darting legend. Many years he worked for darts automats producer Medalist, now he travels as promoter for Dartslive all over the world. 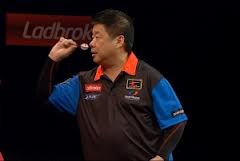 Paul, you lived some time in London when you were a young man..

When I was young I always wanted to get out of Singapore - Canada was where I wanted to go to but I ended in London. I went to school there and learned to be a chef.

For how long did you live there?

I lived there for six years and then went back to Singapore and from there to Papua New Guinea before I settled in the USA. But I still have the Singapore nationality.

You learned to play darts in London - how much has the sport developed till then?

The standard is definitely much higher now-a-days. Young people see the high price money and invest a lot of time and work to get there,

Your last World Championship appearance was 2003 in the Circus Tavern - how did you like Alexandra Palace?

I liked it very much especially this big stage.

Would you say the crowd has changed?

It definitely has changed quite a lot. When I last played there was much less noise - everybody was asked to be quite while players were playing and was quiet. Now it's really very loud.

You now live in California which was years ago thanks to Tom Fleetwood one of the hotspots for steeldarts in the USA - how is it today?

It's more or less dead - there doesn't exist much of a steeldarts scene any longer.

Did you ever play American Darts as well?? 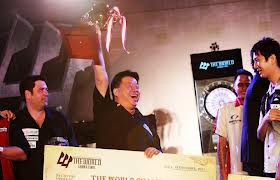 You are the number 1 soft-darts player of the world - what for you is the biggest difference between steel-dart and electronic darts?

I personally think electronic darts is much more fun - it's easier and it is entertainment. And to be sure it much more appeals to the younger people.

Well - in the end I am still a steel-dart player!

Why is soft-darts so much easier?

The targets are much bigger and easier to hit.

It looks to me the players who come from countries where electronic darts is more popular than steel-darts are by now getting better in steel-darts as well.

I think that electronic darts over the last years made steel-dart bigger in those countries too - so those players now have a better chance to play steel-darts as well and are getting used to it.

You are often in Asia - how would you assess the players there - what is there standard?

I feel that as steel darts spreads more there the standard gets much higher with it too. And in Asia - especially in China a lot of young people are playing darts now. There really is a lot of young talent around. It will take some time but it will show one day.

Do you think machines like the new Dartslive machines will help?

I've worked for medalist before but those Dartslive machines certainly change the scene. And of course the equipment in steel darts is much better today as well - I started with brass darts.

Did you ever take a break in playing darts?

No, never really though I didn't always play as much as I play now. When I started to work with Dartslive I started to play more again as Steve Ngu told me I should travel to all the big tournaments and take part. Last year I won more or less everything and this year I took part in the PDC World Championship as well.

Oh yes, I practice every day. But I've got a steeldart board no machine at home. Steve even tried to tell me what and how to practice. He really encouraged me!

Have you ever been a full-time pro? 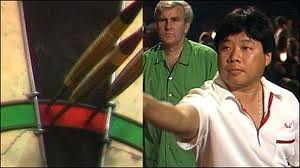 After this famous nine-darter during the Embassy 1990 how many other tournament nine-darters followed?

None at all! That stayed my only one.

How do you assess the situation in darts in the USA - what's going wrong?

I think the situation is difficult. I know about all those new tournament series but as I live most of the time in Hong Kong I don't play any of those tournaments and it's hard to assess whether they will be successful. But at least they try to do something.

What do you think are the biggest problems?

I think one of the problems is that there really is only a handful of good players around and those are long time players. There are not enough young players interested in the sport. Might be electronic darts can help.

There was a discussion between the PDC and the American players - both blamed the others it was their fault tournaments like the desert classic were no success.

The PDC was not happy and alleged the American Players didn't take up the opportunity and played the tournaments. But here the young talent problem shows as well - there are not many good players around and the others unwilling or didn't have the money for participation- 1000 Dollar only to be beaten?

You yourself joined the PDC after the split - were you asked to join?

In fact I was one of the players of the group which split off. I was very close to the Crofts especially to Lorna and she rang me up and said: "you will stay with the BDO will you not?" and I told her I would not. I always stayed with them here at Muswell Hill when I was in London. I got a ten year ban from the WDF.

How popular is the PDC in Asia?

Well - we've just got more the WDF there but I think it is in the end the PDC which is getting it right. This promotional contract with Dartslive certainly is a bit advantage and a big chance for both partners.

What were your experiences with the World Championship crowd - were they interested in the Dartslive machines?

The reactions were really positive, of course it's more the young people who feel attracted.

So you see a chance for the machines in Europe as well?

Of course. There are already some countries where electronic darts is really big like France, Spain, Portugal or Italy. And I think with the right kind of marketing we can manage in the UK as well. Of course it has to look different from what we do in Asia.

Germany is a bit different as they never took up the machines with the bigger targets like Medalist.

How will it be organized?

Well, we are from Dartslive global which is a branch of Dartslive Japan and we are responsible for the worldwide market. Our boss is Steve Ngu who has a lot of experience with selling sports equipment. I work as a promoter and travel a lot. I am very popular in Asia. Our advantage is that pub, bar or restaurant owners don't have to buy our machines but can lease them. That certainly helps to promote.

I read you've got two sons who paly darts as well?

She doesn't play. We can't allow it as she can't lose!!