With his just 33 years Steve Brown is one of the younger players on the PDC Pro Tour which he plays since 2006. Though not really much in the evidence und despite winning only a single event till now his results are so consistent that he took part in the PDC World Championship 2008 for the first time and since 2010 is a regular in this tournament.
But Steve established a reputation outside the tour as since 2010 it bothers him how to introduce the sport of darts already to children and for this purpose he founded the Steve Brown Darts Academy. There children can learn to play darts in a secure surrounding according to Steve's own concept. Steve's dream is that a worldwide darts academy movement will develop from this - following the rules of his academy. It is not unrealistic in our days of global networks.
After the UK Open in Minehead I travelled on to Bristol to talk to Steve in his Café 501 where one can play darts and eat cheap and cheerful. 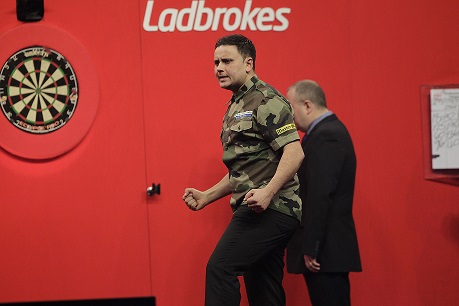 Steve - you are very much involved in youth darts though you are still a young player yourself - when did you start to play?

I myself started when I was 14. My father owned a pub and there I started to play. He is a dartplayer himself.

And how did it happen you got involved in Youth darts?

I've got kids of my own and I realized there is no safe environment for children to learn how to play darts. So I started my first academy in 2010.

How many academies exist by now?

All in all there are 10 now. One here in the café 501, one in another part of Bristol - there my sons play - and one near Bristol - the others are farer away.

And how many children take part?

Well - I don't really know. But here in the café we've got 16, in the second Bristol academy are 16 as well. In The one nearby there are 13 - I think that's about the average.

So you would say it's a success?

Yes it is! Other players are interested too - Jamie Caven just opened his own branch. Jyhan Artut showed some interest to open something similar in Germany. People around the world show interest - it's more a problem to get into contact with the right people who really will set it up. They should have a lasting interest and should be able to put it on a permanent base. 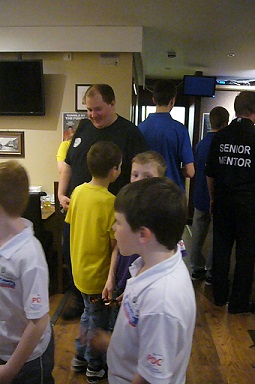 When I look around here there are only boys here at the moment? Are there no girls involved?

There usually are - not as many as boys but we've got three here in the café. I don't know why they didn't turn up tonight.

And when you look at those girls - are they as good as the boys?

No - they are not. But they are getting there. I think it has a little bit to do with social recognition. Darts just isn't thought of as a "girly thing". It looks to me it is changing. But it is difficult for the girls of course. I can understand it. When I was a youth darts was not supposed to be manly and my mates bitched about me and laughed at me.

So how often do the children come here?

They come here once a week for their academy evening - it's usually Wednesday here in the café.

The children all wear the same shirt but all in different colours...

That's the grading system. When they first come here and start playing they get a white shirt and those who've finished leave with a black shirt.

How old are the children?

Some look rather small - do you in any way adjust the boards?

Yes - when they are very small we at the beginning might adjust the height of the boards. They would start playing at a board where the Bullseye is at the height as their eyes. So it's the same for them as it is with the grown-up players. Otherwise they might form strange throwing habits - throwing over their head all the time for example. As soon as they play with the others they have to be able to throw at the normal height.

Is it free for the kids?

No - they have to pay three pound for the evening.

So what happens now when a new kid turns up?

Every new kid gets a starter kid from us which includes the shirt and a tune up kit with flights and shafts and a few other things like a darts case etc. 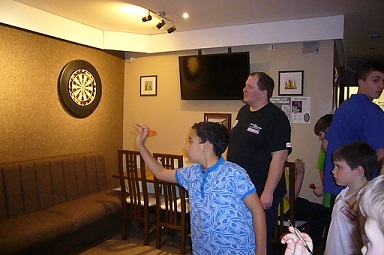 The kids have to bring their own darts. We don't recommend any darts but we of course offer advice.

And this starting box - do you buy yourself what is in there?

No - that we get from our sponsors as we do the dart boards. Dartscorner gives us the shirts and the other equipment comes from Unicorn.

But the academy is in no way related to any organization?

No we are strictly impartial - and neither BDO nor PDC orientated.

And what now happens during such an academy evening?

We've got three different routines the players have to finish on the evening. That would be Shanghai 10's to 15's, Around the World on doubles and Shanghai 15's to 20's. Scoring darts earn points and we write down the scores every week so that we can see the improvement. The number of points got over the season reflects in the colours of the shirts

Do the kids practice at home?

We don't really ask them to do but most of them do it nevertheless. They are very keen.

And what do they practice?

But it's not only that the kids play here on there own...

No - they practice with coaches - well, as they are not certified we call them mentors not coaches.

Those coaches or mentors don't have some kind of uniform tuition before they start to practice with the kids?

Not yet. And they are different and of course what they do is different. And I think it's quite good the way it is.

Where do the coaches come from?

They apply to be mentors. It gets around when we are looking for new ones. I talk to them and those I think are suitable I take.

So it's you who pick the mentors? 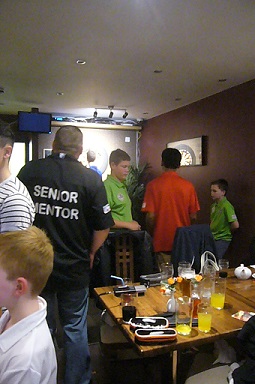 Any negative experiences so far with them?

No not till now. It looks I always picked the right ones! Of course I some kind of control them. I sometimes turn up unexpected and unannounced to have a look at what's going on.

And what about the children? Are there many who back off?

No - they all stay with us.

Do you give any recommendation what they should do when they "finish" here?

No not at all, but it looks what they learn here makes them quite a success in teams and on county level. Two of them now play on the PDC Challenge Tour. One of our kids recently beat Tomas Seyler when he was here with Jyhan Artut.

Do you organise tournaments as well?

Oh yes - quite a lot. And thanks to our grading system only players on the same level play one another. There are often differences in age or height but the level is the same.

What for you is most important in teaching the children?

What I think is the main thing is to have fun, to enjoy themselves. Of course they learn darts etiquette as well, they make friends and they find out that the age, the height, the gender, whether slim or chubby in the end is not important at all. They do something together and they have fun together - that is what matters.

We sit here in your café 501 - that was another of your ideas?

Yes - you see on one side pubs get fewer and fewer here in England and with that it's more and more difficult to find places to play darts and on the other side we wanted a safe place for the children as well.
So Mark Dudbridge and I got this house - I already for a long time kept one eye on it. And as we know that in other countries dart is often played in other establishments than pubs we decided to open a darts café.

And you did all yourself?

Yes - we were both in the building business so we could do all ourselves. And now we've a café from 8.30 to 16 and after that it's a darts venue. On Monday, Tuesday, Thursday and Friday we've got teams here and on Wednesday the academy.

Do you and Mark play here as well?

Oh yes. But we are on different teams and it always seems to happen I am away when he plays at the café and reverse.

That might change soon - we've recently discovered the building has a basement too so perhaps we can extend!

Bristol is a town with a lot of good dart players...

And we often have some walking into the café! Bob Anderson turns up from time to time, Jarkko Komula has been here as his manager lives nearby....

Steve - you've got a lot have a lot on your plate with the academy and the café - could that have been a reason why you lost your first round match in the UK Open?

I don't think so. All this is very positive.

Not really - it just were not the UK Open. I played on stage two and we had our own practice area. And we had no TV screen there so we didn't have an idea what was going on at all. We were called on stage not really prepared due to this.

Do you have time at all to practice? Or is the academy some kind of practice.

To be sure not though I might be able to learn something about practice due to it. Playing in a team is more like practice. And I have time to practice at home. My partner has horses and goes there in the mornings so with her out of the house and the children away to school I can practice every morning. 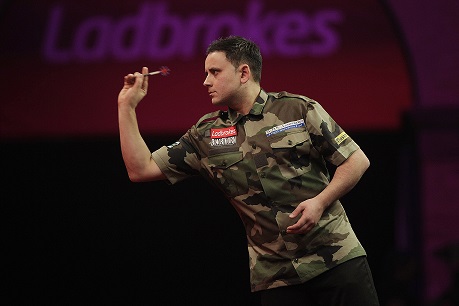