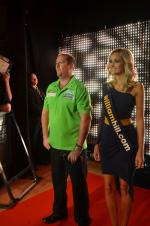 Dean Winstanley is one of the upcoming players in the BDO.
Winstanley only plays on the BDO Circuit for a short time but is already rather successful. 2010 he won the German Open, the England Open and the Belgium Open and stood in the quarterfinals of the Winmau World Masters.
2011 he had his debut at the BDO World Championship an stood in the final. Later in the year he reached the final of the Winmau World Masters He was invited to take part in the PDC Grand Slam of Darts and played himself into the second round.
Winstanley is affectionately known as "the oldest 30 year old in darts" due to his physical appearance. From his former marriage he's five own children and he now lives with Lorraine Farlam who has got two children.
During the Grand Slam Globaldarts conducted the following interview with Dean.


Dean - How do you enjoy to play the Grand Slam?

I really like it. The tournament is great, the crowd is great and the atmosphere is great too!!!

What for you is the biggest difference to a BDO tournament?

I don't really feel there is such a big difference at all. Of course in the BDO the noise is more some kind of "underground" noise. But for me in the end it's more difference between a floor tournament and a stage tournament.

Did it help that your first Grand Slam match was against a fellow BDO player?

Oh yes!! I think it helped me to settle in the tournament to play my first match against Ted Hankey. I already played several times against him and that made it easier for me.

Was is a problem for you the walk-on music played for you was not your own but that of your opponent?

At first it really confused me a little bit. But such things happen and later I only laughed about it.

How important is the walk-on music for a player?

For me the walk-on music really is important. I always sing with it. It helps me to relax on my way to the stage and puts me in the right mood for the match.

Could you after your experience with the PDC imagine to switch should there be the chance after Lakeside?

Of course it is on my mind. But first on my mind is at the moment to play Lakeside and to see what will happen.

Did you ever think about giving the qualifying school a try?

No not at the moment, not in the situation I am now. And to be sure not before I've played the BDO World Championship.

One can read you threw your first darts when you were 18 months old - are you from a darting family???

Oh yes, all the family - my mother, my father, my siblings all play darts.

What do you think - how good were you as a youth?

I was better than then I am now!!! 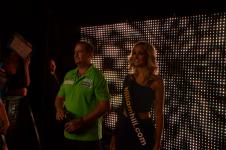 What made you to pick up darts again with 23?

Well, I went to a pub with some friends and took the darts in my hand and was immediately caught again.

By now you are a rather successful player - how good do you think you can get?

When I started to play on the BDO circuit I said I'll give me five years to get into Lakeside and the World Masters final - I've achieved it in a single year already.

Do you set yourself goals?

It certainly is one of my goal to become a Lakeside World Champion.

I don't know. Perhaps to switch over and snatch me a title here too!

I practice two hours every day. Usually I practice 15-Dart legs. Five sets with three legs. Should I not manage a leg in 15 darts I've lost.

As you are one of the younger players what do you think of the methods of sport science in darts?

Oh - I am very interested in that. And keep myself informed about it. For example I use now for the first time one of those wristbands because when it pinches me I am always reminded I should try and relax a little bit!

Are you a full time professional already?

No, I am not yet. I've got an own property maintenance business.

But you've got a sponsor?

Yes, luckily I have got one.

Which darts do you play?

Do you do exhibitions as well?

Yes, I do quite a lot which is good for my finances. I am still astonished people come and pay to see me!

What are your interests outside of darts and do you still have time for them?

I love to restore old cars. I get them going again and then sell them to people who really appreciate them. Till now I haven't got one myself. The only one I really would like to keep would be a Mustang. 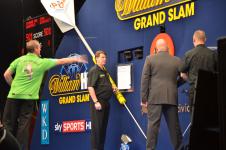