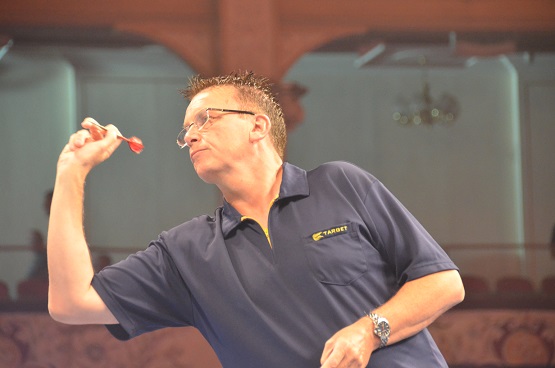 The entertainment in Blackpool always included the appearances of bands including the -Beatles and the Rolling Stones - all have been here again and again, well, with the exception of the Rolling Stones who managed to get banned from Blackpool.Many of the songs mentioned Blackpool - a town everybody knew and most had visited. A closer bonding to Blackpool had Graham Nash - first founder member of the Hollies, later founder member of the group Crosby, Stills and Nash who were joined later by Neil Young. Graham Nash more b chance was born in Blackpool 1942 when his mother was evacuated here during the war. After the war Graham and his mother returned to Salford where they originally lived and which like Blackpool is situated near Manchester. And in Manchester Nash in 1962 founded together with Alan Clarke the "Hollies" a pop group first very popular in Europe and later in America as well. The Hollies exist till today. During one of their tours in the USA Nash met 1966 David Crosby and Stephen Stills. A few years later Nash left the Hollies and founded with the two Americans Crosby, Stills and Nash. Nash is both British and American citizen. He worked over the years together with many different musicians and groups, sometimes even again with the Hollies and was awarded in 2010 by the Queen Elizabeth II for his musical merits and his charitable work the OBE. Beside his work as a musician Nash is well-known as a collector pf photographs and he digitalises photographies as well and has done several exhibitions with those.
Nash is not only the singer in many formations; he wrote and still writes a lot of songs as well. One of his songs - the semi-autobiographical "Military Madness" alludes to the years he as a child passed during the war in Blackpool. 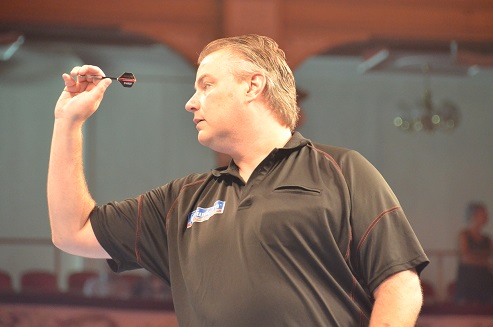 The fourth evening with the first four matches of the second round in fact started around three quarters before the official schedule with a surprised for the already assembled crowd - for a demonstration match Keith Deller and John Part came on stage. As the players were surprised as well they were not really prepared but nevertheless you can say John Part was by far the better player, he scored better, finished better and even threw a 180 in those three legs. One can imagine he still could win the one or other "normal" match after this. 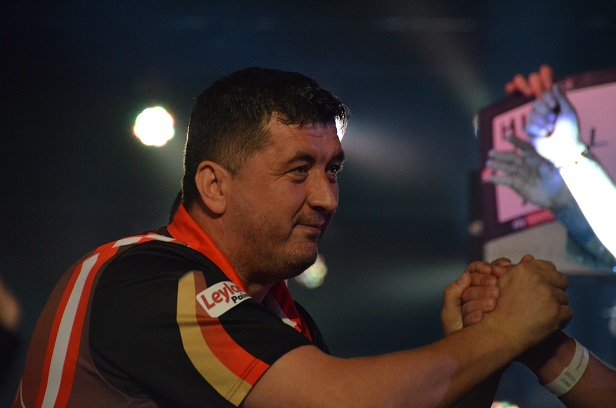 Than the second round started with a slightly lengthy match between Mensur Suljovic and Justin Pipe who both to be sure belong to the slow throwing players on the circuit. The atmosphere nevertheless was great in the quite well filled Empress Ballroom and the crowd soon took sides with Suljovic who threw a little bit faster then Pipe. Soon it was clear as well that Suljovic would dominate the match. Not that Pipe didn't have any chances but other then Suljovic he had a lot of problems hitting his doubles. Only after the last break Suljovic missed a few as well but Pipe couldn't use it to his advantage and lost in the end 6:11. But at least Pipe had managed to get into the second round of a major tournament again. Suljovic convinced in the match. 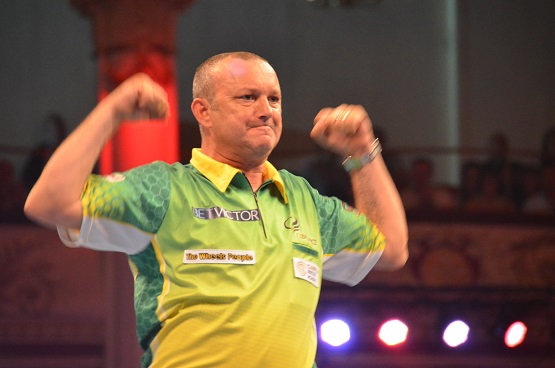 Next on was the match of the two unseeded players between Darren Webster and Steve West, a close match with a few advantages for Webster who used the chances he got more consistently and was a little bit more "edgier" then his opponent after he had overcome his slow start. Averages and hinting rate on the doubles were almost identical. A very entertaining and interesting match. 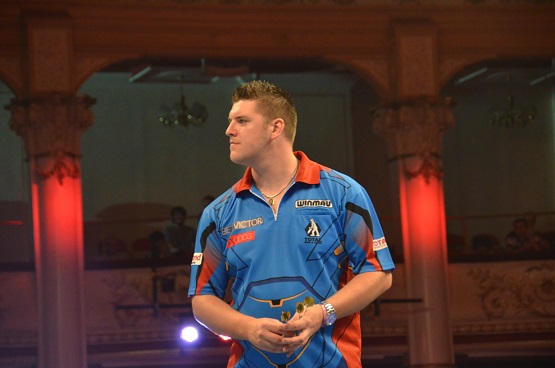 The following match was a dramatic one. With Gary Anderson one to the top favourites to win the event came on stage enthusiastically cheered by the crowd. But the match didn't develop according to his ideas, his opponent Daryl Gurney had other ideas and was able to press them home. The lead changed several times but after Anderson had been 3:0 in the lead in the early stages most of the time the Scotsman run after to catch Gurney. And after each of Anderson's 180s Gurney had a 180 as answer and beside he was much more clinical on his doubles. Anderson tried everything but Gurney won 11:9. Gurney celebrated for a long time on stage and tried to gain control of his emotions. When he had managed it the after match interview took place - this time on stage as it looked Gurney wouldn't never want to leave it again.Anderson had already left the Winter Gardens together with his wife and his son. Is now Gurney one to the favourites to win? Should he keep up his performance it cannot be ruled out. This second round match was to be sure the match of the tournament so far. 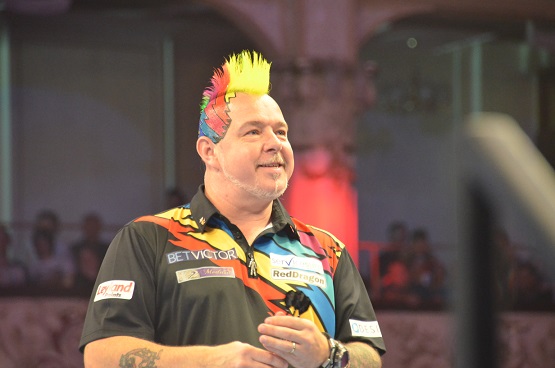 In the last match of the evening a compared to the first match much improved Peter Wright played against a compared to his first round match much weaker playing Cristo Reyes. Wright was unbelievable clinical on his doubles - it was a very one sided match and Wright won it 11:4.

It had been a very long evening not only because of the slightly longer format but because the breaks in between the matches were much longer. So I was just tired and very glad when I was back in my bed and breakfast. But in hindsight it had been a rather good evening of darts. We'll whether the second second round evening will be as interesting and varied.