The second day of the World Matchplay offered the same weather as the first one. The sky looked grey and a cold wind blew over from the sea. Not really a day for the beach but perhaps Darts weather and really a long queue already waited in front of the Empress Ballroom to enter the venue.

Punctually the doors were opened for fans and all other waiting people, Not only the ballroom was well filled the press room looked rather full as well and it didn't take long before with Darren Webster and Steve Lennon the first two players came on stage. Somehow I am still not used there are no walk-on-girls any longer. Many players look a little bit lost while they wait at the end of the walk-on carpet for their appearance.. I hadn't thought Darren Webster would start like this. He played and scored much stronger then Steve Lennon at the start of the match. But the averages got more and more similar while the match went on. Lennon several times came quite close to draw but Websters lead was big enough and he never was in danger to lose the match. So Webster convincingly progressed into the second round and another debutant was out of the races. The second match brought an at least for me very interesting debut as with Max Hopp the first ever German who had qualified for the tournament stood on stage. He was greeted quite friendly by the crowd which was divided evenly into White and Hopp surporters. In the first leg both players looked very nervous - White has already lost several times against Hopp and probably was not sure what to await this time and Hopp had already looked nervous and unsure when I had seen him the night before exploring the venue. White's nervosity showed in a lot of double trouble which he couldn't get rid of during the whole match. Several times he ended with double two as he had not suceeded to hit his original finish in his first attempt. Hopp didn't play weak or bad, he just scored not as good as White. The reason that the result was not clearer in the end was White's problem with the doubles but finally he crossed the finishing line and it was a deserved win after all. So Hopp became the next debutant after Jonny Clayton and Steve Lennon to lose his first round match.

But it showed already in the next match that more experienced players are very much able to mess up their matches as well. Gerwyn Price just got no where against Joe Cullen. Might be his injury was the problem though his statistics don't look bad at all. But in the end he was lucky not to bet he first whitewashed player of this year's tournament, that would have been really devastating. I did have seen him play much better matches here in Blackpool. At the end of the afternoon session we could all follow a match wich was a little bit similar to a Greek tragedy. We had one player, who despite his mistakes - and there were a lot at the end of the match on the doubles - tried to stay positive: Steve West. On the other side we had Daryl Gurney who really looked like he would have prefered it to be far, far away instead to have to watch all those missed matchdarts of his opponent. He literally slogged himself along to the oche against his will, and it looked every time he weighed whether to throw at all. But he won in the end in the overtime and just had no energy left to celebrate, only enough for some tears.

After the usually break the evening session started with the match between Mensur Suljovic and Steve Beaton. Suljovic looked the stronger player from the start of the match but nevertheless had some problems to get over the finishing line. Beaton used this double trouble for a few leg wins to get closer to the Austrian but in the end Suljovic won 10:6. In the next match with Gary Anderson the now favorite to win the title came on stage und he looked very nervous. Anderson is always a player who looks a little bit antsy, but I didn't see him like this for a long time. Beside he looked like he was afraid to miss his train - Bunting was not throwing fast enough for him. The match was gripping and relatively close despite Bunting's average being much lower then Anderson's. Finally Anderson had settled in the match, was less nervous and managed to increase his performance. And so in the end the better scoring Anderson was the deserved winner of the contest. Next on was the reigning champion of the world Rob Cross against Mervyn King. King had the much better start into the match but that soon changed and Rob Cross dominated the match which had been quite close at the beginning. Cross had the so far best average of the tournament. But relating the averages the tournament till now was not really impressing. 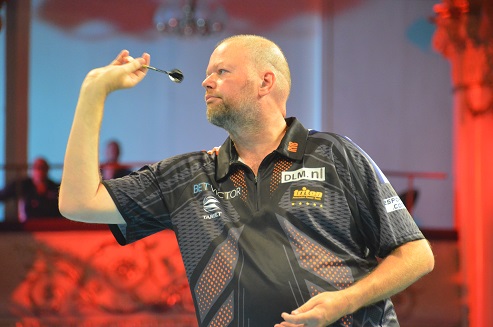 The last match of the night was the match between Raymond van Barneveld and Kyle Anderson. The crowd stood behind the Dutchman though there were a few Anderson supporters around as well. Van Barneveld returned from a six week break and he looked rather fit. Anderson won the first leg but after that van Barneveld dominated and won several legs in a row. Anderson started a comeback but it was too late. Van Barneveld just returned into high gear and progressed with a 10:6 win into the second round.

There were no big surprises on the second day - the most thrilling match was the match between Daryl Gurney and Steve West. Beside Gerwny Price, who has the known problems with his foot, all other seeded players progressed into the second round. Favorites like Rob Cross and Gary Anderson showed in good form. Till now we had no average above 100 and only one - Rob Cross' 98.58 - close to the 100 mark. From the debutants till now only the one with the most difficult draw - Jeffrey de Zwaan - is still in the tournament.