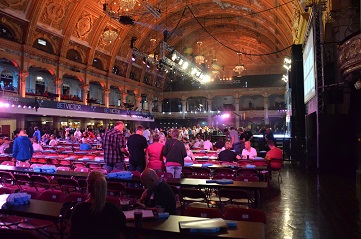 As we all know the World Matchplay takes place in the Empress Ballroom of the winter Gardens in Blackpool though with the exception of very few dartsplayers no one during the event really dances in here. But in fact much longer then the World Matchplay the place hosts an anual dancing festival which first took place in 1920. Who's idea it was to install the festival here is not quite clear. Probably it were two persons who together planned it - the then director of the Winter Gardens, Harry Wood, and music publisher Nelson Sharpes who publishid in his music publishing house in Blackpool all the sheets of the dances danced in the Ballroom. At this time only Waltzes, Lancers, Two Stepps and so called Novelity Dances were danced.
When the festival started modern Ballroom dances and Latin America dances were not yet developed and so the first festival in 1920 offered only three competitions - Waltzes, Two Stepps and Foxtrotts. The festival went over four days and on the fourth day one of the dances was declared the winner and his developer was decorated. Over the years more dances were added and not only the dances could win prizes but the dancers as well. Competitions for professionals and amateurs were offered. A special valuation system was developed which is used till today around the world. During World War II the festival paused but started again in 1946 and it got more and more popular while the number of competions incresed all the time and more an more dancers from all over the world took part. 1961 for the first time a competition in Latin-American dances took place. Beside the festival open for all dancers a festival only for dancers from the UK now takes place. Extremly popular is the Professional Invitation Team Match to which always teams from four different countries are invited. In 2017 2790 dancers from 60 countries took part in the festival.

Not as elegant as the dancers the dartsplayers usually are and they don't glide over the historical parquet of the Empress Ballroom but move around on stage. But of course there are elegeant and not so elegant players and for many of them rhythm plays a big part in their performance. On the third day of the World Matchplay the first round was played to the end und I was looking forward to see how the last two debutants would fare. But first Kim Huybrechts and John Henderson came on stage. First it looked it would develop in a rather one sided match dominated surprinsingly by Huybrechts who had not been successful recently and rarely had a reason to celebrate here in Blackpool before. But John Henderson doesn't look like he gets easily worked up and he is not a player to give in and he fought back into the match. So a one-sided match turned into a close affair. Huybrechts had the advantage that he won the throw for the bull but nevertheless he fell behind. He returned and forced a tiebreak. Kim won his legs and Henderson always responded winning his legs so we had a 12:12 and a Sudden Death leg would decide about the outcome of the match, the first ever Sudden Death leg in the World Matchplay's history. And again Huybrechts had the advantage to start the leg but Henderson got into the leg better and had the first matchdart. But he missed and Huybrechts had a chance which he used to win the match. It was a great match and to be sure no other player shows his delight as nice as Huybrechts does! Really one sided was the following match between Simon Whitlock and his friend and debutant Richard North, who couldn't hit much but showed his frustration quite in an expressive manner. When it was 8:0 Whitlock North finally manged to win a leg. And as he enjoyed that so much he threw in the following match three 140s and won it again when Whitlock missed his double. So it least was not a whitewash for the young player but after he had won those two legs he returned to his scores around 40 points and Whitlock won 10:2 - an easy win. Richard North to be sure will not look back with pride at his first World Matchplay appearance.. The third match was as close as the first one, but it was from both players not as good: James Wade played against the last of the debutants Jermaine Wattimena. Wade needed a few legs to get into the match so Wattimena had a lead at first but Wade managed to draw and after that none of the players managed to pull clear though Wade was all in all a little bit better then Wattimena. Wade missed with his first matchdart and Wattimena drew 9:9 and the match went into the tiebreak. Wade in the end won 12:10 but should he intent to progress further in the tournament he will need to improve. The last match was one-sided again - Peter Wright played against Jelle Klaasen who played poorly while Wright played on the same level as Wade and Wattimena. When Wright was 8:2 in the lead Klaasen started a comeback and won a few more legs. Wright won his ninth leg with a 170 finish, the second of the tournament after Joe Cullen's 170. The finish was the highlight of the matche and ended Klaasen's hopes. A 10:5 win for Wright but as Wade he has to improve should he want to get far in the event.

That had been the last match of the first round. Out of the debutants only the one with the most difficult draw had survived - Jeffrey de Zwaan. All others not really showed convincing performances and the two of the last evening just played way below their best. From the unseeded players beside de Zwaan only Joe Cullen is still in the tournament. Outstanding performances we didn't see so far neither averages over 100. From those favorites still in the tournament Anderson and Cross showed the best effort but till now none of the players really plainly forced himself as the possible winner.