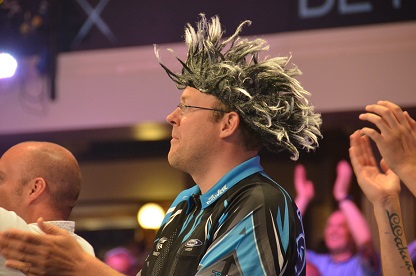 Blackpool is a seaside resort which offers not one or two but three piers, which is quite unusual. The oldest of those piers is the NorthPier, which already was built in the 1860s. First it was not planned as a real pier but as a promenade but to fight competition it was broadend and attractions like clubs and theaters were added. Other than the two other piers which were working class piers the North Pier should attract the more middle class holiday maker with concerts and respectable comedians. Till 2011 it was the only pier in Blackpool with an admission fee. Till today the North Pier is very much alive though he had to survive fires and storms. At the seaside end at the beginning you could find a pavillion which before the Winter Gardens were built housed all indoor events. Several ships run aground and into the pier over all the years, often it was rebuild and the owner changed several times. Charlie Cairoli, a well known clown who appeared for forty years in the Tower Circus in Blackpool threw 1939 when he heard about the start of World War II a watch which Adolf Hitler had presented him with only a few monthe earlier during a guest appearance in Munic's Circus Krone into the Irish Sea. The first night of the second round turned out to be a stormy night and several players run aground...
The second round started with the match between Michael Smith and Dave Chisnall and before the match to be sure Smith was the favorit. And he played in the first few legs like the favorit as well and steamrolled Dave Chisnall with a 7:1 lead. But then Chisnall had enough and turned up the heat. Smith seemed to be surprised and didn't find a way to stopp Chisnall who caught up leg by leg till he drew and then just went on in front. Smith managed to win only one more leg while Chisnall won the match 11:8. And so Dave Chisnall dumped one of the favorits and even was the first player who threw an over 100 average in the tournament. The second match was surprising as well because it was a rather onesided affair . Joe Cullen played against a very tired Daryl Gurney who only could keep up till the first break. Cullen won the match with a good performance and without a problem 11:3. His average was just below 100 and he hit 50 percent of his doubles with his first attempt. The unseeded Joe Cullen not only can win against an injured Gerwyn Price . But Daryl Gurney to be sure had a pitchblack day. As unimpressed by seeded players as Daryl Gurney was Jeffrey de Zwaan in the third match who played this time against Adrian Lewis. But Lewis to be sure is at the moment stronger then Gurney and he was not steamrolled but won his share of legs as well. He looked very relaxed. When he moved closer and closer near the end of the match it looked for a few moments de Zwaan would falter and that he was impressed by Lewis darts. But his lead was big enough and Lewis couldn't find the darts to draw. De Zwaan won 11:9. So two unseeded players no one would have bargained for are now in the quarterfinals and with Lewis the dark horse of the event was eliminated. 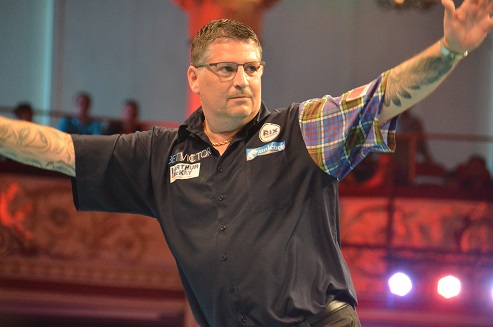 After all those already thrilling and high class matches with the clash between Raymond van Barneveld and Gary Andersonthe crowning match followed. While Van Barneveld's walk-on was like a bath in the crowd Anderson spend no time coming on stage. But he looked much less nervous then in his first match only very down-to earth. It looked for a long time Anderson - now the to favorite to win - would be elimnated by the Dutchman especially when the Scotsman once again had a slow start into the match. But all in all van Barneveld didn't play consistent enough and from time to time lay off the gas pedal and his average went down from over 100 to 95 during the match Anderson showed a great performance throughout after he finally had arrived in the match. So nearer the end the very determined Dutchman was in over his head and we had for once a celebrating Anderson as the winner while van Barneveld fast and to be sure deeply disappointed left the stage.

It had been a really highclass evening of darts with the till now to be sure best matches of the tournament. And not only Dave Chisnall surprised - I had not awaited the two unseeded player would present themselves so well. In the last match Anderson once again showed why he already won two World Champion titles and this year the UK Open as well - when he moves into gear he is very heard to stopp. What a pity Daryl Gurney had such an off day. Might be his first round win which he more or less wrested from Steve West took it out of him.