The Canadian star - without doubt one of the best ever - has re-joined Team Unicorn after seven years "on the road!"

Part heads back to Unicorn as a player, ambassador and mentor. 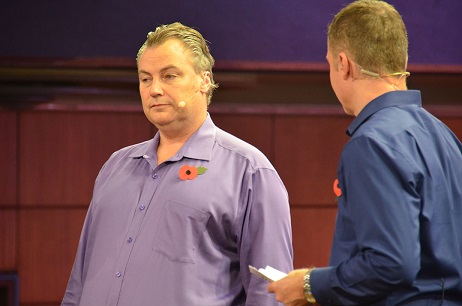 "It's just great to be back," he said. "I always felt very comfortable with Unicorn. A great product range, leaders in their field and they love to innovate. That's my type of company!" "I still have a great passion for playing, but the roles of ambassador and mentor appeal to me greatly. Darts is my life and I will be honoured to represent the Unicorn brand, get involved in helping other players and pass on years of experience."

Part believes he can still achieve on the tough PDC Tour after superbly winning seven matches on one magical day at Wigan in January to earn his prized Tour Card.

"That was huge for me," he admitted. "A really big boost for my confidence and belief. I know I can still play to a really high standard. I need more days like that!
Part believes he can still make a difference. "Being back at Unicorn will hopefully help me to make my mark again. It would be great to get back to the World Championship as a player and a commentator!" He went on: "I feel it is also very important to help other players build for the future. Maybe a kind of calling for me, which is why the new partnership with Unicorn is perfect. But I definitely feel up to the challenge of playing. I am 50 now but there are still possibilities for me on the circuit!"

He will get his darts "fine tuned" with Unicorn and they will also be made available to buy..the darts of a three-times World Champion.

"I guess I'm the everyman of darts. I'm the guy who's played everyone. I'm not a superstar, but I hope that I'm what everybody could be." "My mentality hasn't changed. I want to taste those big games and the success that goes with it. I love the commentary for Sky Sports. It is great to analyse. I can still be awestruck by watching a game. It doesn't feel like a job! But I feel I've still got a good two or three years as a player to achieve."

Unicorn Managing Director Edward Lowy couldn't hide his delight: "We loved working with John, Part 1, as it were, and sharing in his third World Championship win in 2008."

That history making victory for the Canadian was the first World Championship won at the Alexandra Palace.

Mr Lowy added: "JP 2, The Sequel, is going to be blockbusting, barnstorming good fun as we work with John on the oche, the media and to use his years of knowledge and experience. Great to have you back JP!"

Part summed himself up in typical Part fashion: "I'm probably the best pub player in the world to be a three-times World Champion!"

We look forward to the latest chapter in the John Part story.