It took till 2001 before the first BDO Women's World Championship was played - with just four players. That was changed soon - already 2002 eight women took part. 2014 the number was increased again and now sixteen players stood on the stage of the Lakeside Country Club in Frimley Green. What never ever changed over all those years was the short format of the matches. The players always complained best of three sets was much too short. What at least changed a little bit over the years was the significance of the female darters and the television time for the Women's World Championship. First only the last few darts of the final were shown and that at a time at which scarcely anybody sat in front of the TV. That a change happened slowly had at least a little bit to do with Anastasia Dobromyslova. And to be sure with the Women's World Championship Final 2008 which entered the history books as one of the best women's finals. 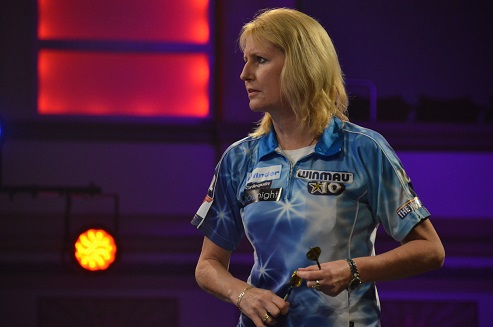 2008 the BDO Women's World championships was played for the eighth time and so far Trina Gulliver had won the event every time without problems. Often her opponent was Dutch Francis Hoenselaar who was a close friend but so far Hoenselaar had lost every time. But in 2008 all was different.

Russian Anastasia Dobromyslova had been a successful youth player who won 2001 der World Masters girl's event and 2001 and 2002 WDF Europe Cup Youth. As Grown-Up she celebrated her first successes not before 2006 when she won the British Open and one started to notice the young, blond woman, who scored so well and breathed new life into women's darts. 2007 Dobromyslova qualified for the first time for the BDO World Championship, but lost 0:2 in the semi-finals to Trina Gulliver. During the year she won several titles among them the England Open and the British Open and secured herself together with Irina Armstrong the Pairs tile of the WDF World Cup in the Netherlands. For the World Championship she was seeded as in the year before as number four.

Trina Gulliver had won 2007 beside other titles the Dutch Open and reached in the World Masters the semi-finals. So she looked in form as well for the World Championship. This year it was Dutch Francis Hoenselaar who was the number 1 seed, Gulliver was "only" seeded second.

But nevertheless everybody was convinced Trina Gulliver would once again win the title - in keeping with the motto "The same procedure as every year".

In the quarterfinals Gulliver competed against Welsh Julie Gore, who gave her debut that year. It was no problem for Gulliver though she lost one set. She won the other two both 3:0 and had an match average of 78.33.
Dobromyslova met in the quarterfinals English Dee Bateman, who was a debutant as well, and had a hard fought first set through which she came through 3:2 before she won the second set as well without losing a leg. Her average was with 78.30 almost identical with Gulliver's.

In the semi-finals Gulliver met Dutch Karin Krappen - a very experienced player, who reached the semi-finals in 2004 and 2009 as well. Gulliver defeated her with 2:0 and with a slightly lower average. In every set she lost one leg to her opponent.
Dobromyslova played in the semi-finals against English Stephanie Smee who took only part in this World Championship and played her last tournament in 2014. Dobromyslova won without losing a leg as well 2:0 with almost the same average as in her first match.

And so we had a final between the established and seemingly composed Englishwoman Trina Gulliver and the young, upcoming and girly Russian Anastasia Dobromyslova, who was foretold a rosy future.
Dobromyslova - who had commented after her defeat the year before that defeat made her angry and made her practice even more - looked well prepared for another Gulliver clash. 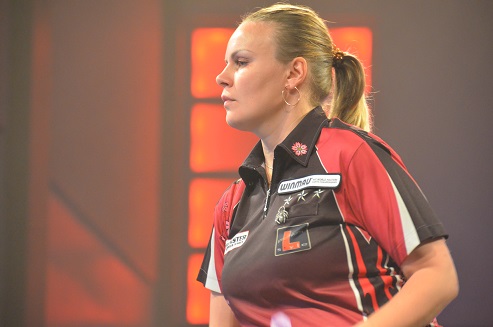 Gulliver opened the match with a 180, but it was Dobromyslova who kept her nerve and she forced a deciding leg in the first set. Gulliver had the throw but it was her opponent who reached a finish first after twelve darts while Gulliver was well behind. The Russian missed with her first setdarts but in the end won the first set of the match and Gulliver had lost a set in which she had the throw.. The experienced Gulliver looked clearly nervous and just was not able to gain control of the match.
The first leg of the second set was a head -to- head race which Dobromyslova decided with a Bullseye finish. This spurred her and she threw in the second leg her first 180 and outscored Gulliver once again. Again she was so far ahead in a leg that it caused her now problems she missed her first leg darts. Dobromyslova's first throw in the last leg was a 140 and Gulliver - who urgently needed a high score was out of luck with a bouncer - she had hit with both her first two darts the triple 20 but the third darts landed so awkwardly in the same segment that the other two bounced out and landed on the floor - instead of an 180 she only scored 60 points. She nevertheless found a way back into the leg but couldn't hit the Bullseye for her finish and Dobromyslova hit with her third darts the winning double.

It was a deserved win for the Russian. She averaged in the final ten points higher than her opponent. But for the world of darts it was a really upset that the "Golden Girl" was dethroned for the first time. It was the end of an era and similar to Fallon Sherrock after her two wins in the PDC World Championship last year, Dobromyslova was now in the limelight of the media. And - not to forget either - for the very first time a woman not from England had won the BDO Women's World Championship.

Since than Gulliver won the title three more times while Dobromyslova was twice more the Women's World Champion. With all in all ten titles Gulliver holds the record as she holds the record for the highest match and the overall tournament average. 2006 Gulliver won her semi-final match against Clare Bywaters with a 95.97 average and her overall tournament record average is 89.45 from 2001. Closest came Lisa Ashton who had in the quarterfinals 2015 against Gulliver a 90.18 average and sits in the overall tournament average table in the third place behind Gulliver. Gulliver's tournament records will stand the test of times - after the end of the organisation there will be no more BDO Women's World Championships.