Meet The Players - Darts on the Philippines

Darts on the Philippines Not long ago one often heard that there are a lot of good darts players on the Philippines and that it was only a matter of time before we would see the first Philippine winner in an international competition. So far it didn't happen and might be one of the reasons is that the sport of darts is no longer as popular on the Philippines and that the people now prefer Badminton and Billiard. But one of the biggest problems for the sport is that no infrastructure exists. As the National Darts Federation of the Philippines found out in a study most of the darts players live in villages and the missing infrastucture is a very high hurdle for them. Beside there are no sponsors at all around for the sport. The NDF, which was founded 1998, sees it as the biggest and most necessary quest to build up the necessary infrastucture to help the sport and offers the local darts organisation several tools to help them. But it will not be an easy task. 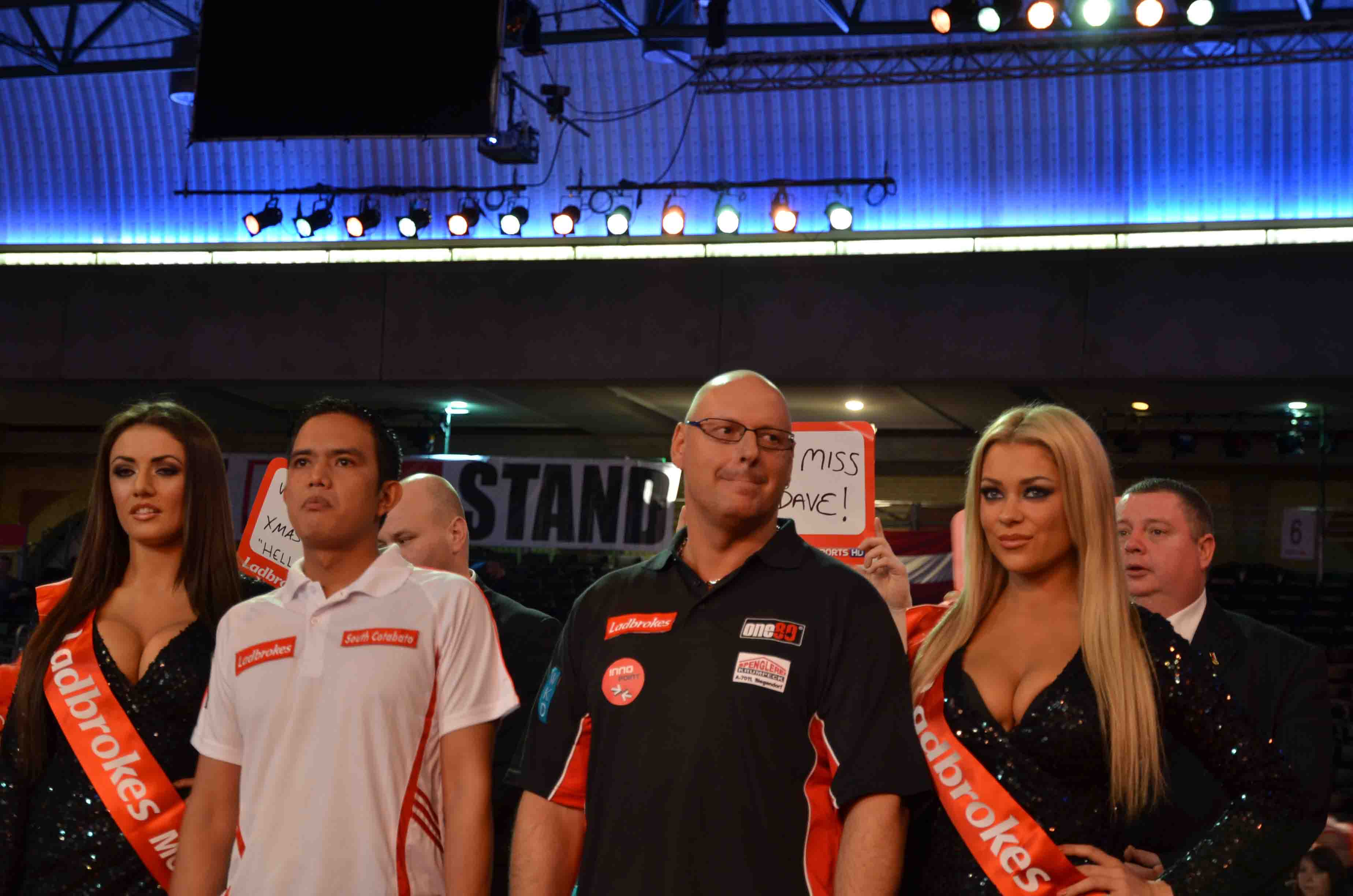 Nevertheless we already see for many years , excactly from the first year the PDC invited international qualifiers to tak epart in the World Championship (2008) players from the Philippines on the stage of the Alexandra Palace who qualified over the years in different ways for the tournament. The first one in 2008 was Rizal Barellano, who was eliminated in the preliminary round by Miloslac Navratil and of whom you never heard again. Next up was 2009 for the first time Lourence Ilagan who was eliminated in the preliminary round as well. One year later Christian Perez appeared who won his preliminary round match with an average of 94.53 but lost first round 1:3 to Robert Thornton. 2011 the not so well -known Juanito Gioson came on stage for the Philippines but didn't survive the preliminary round either. 2012 Christian Perez returned and again won his preliminary round match but again lost in the first round - this time to Alan Tabern. Lourence Ilagan made in 2013 his next appearance. He won his close preliminary round match against Jamie Lewis with 4:3 but lost first round to Colin Osborne. 2014 Edward Santos qualified but was not able to travel to London. Perez returned once again in 2015 but this time lost his first match 0:4 against Cristo Reyes. 2016 Alex Targarao was the Philippine qualifier - he lost his first match - now in sets - 0:2 to Keita Ono. Not better fared Gilbert Ulang in 2017. 2018 no player from the Philippines took part in the World Championship but in 2019 two appeared. Lourence Ilagan lost his first round match despite an 95.25 average against Vincent van der Voort. But the second Pilippine player, Noel Malicdem won his first round match agaist Jeffrey de Graaf before he lost second round to Kyle Anderson. The same duo reappeared in 2020 and the same happened - Ilagan lost first round to Cristo Reyes, Malicdem won his first round match but lost in the second round to Peter Wright.
2021 was due to the Corona pandemic a difficult year for international qualifiers but we had nevertheless Lourence Ilagan who lost to Ryan Murray in the first round. Corona is still a problem but Ilagan made it back this year once again only to lose without a chance to Raymond van Barneveld in the first round. 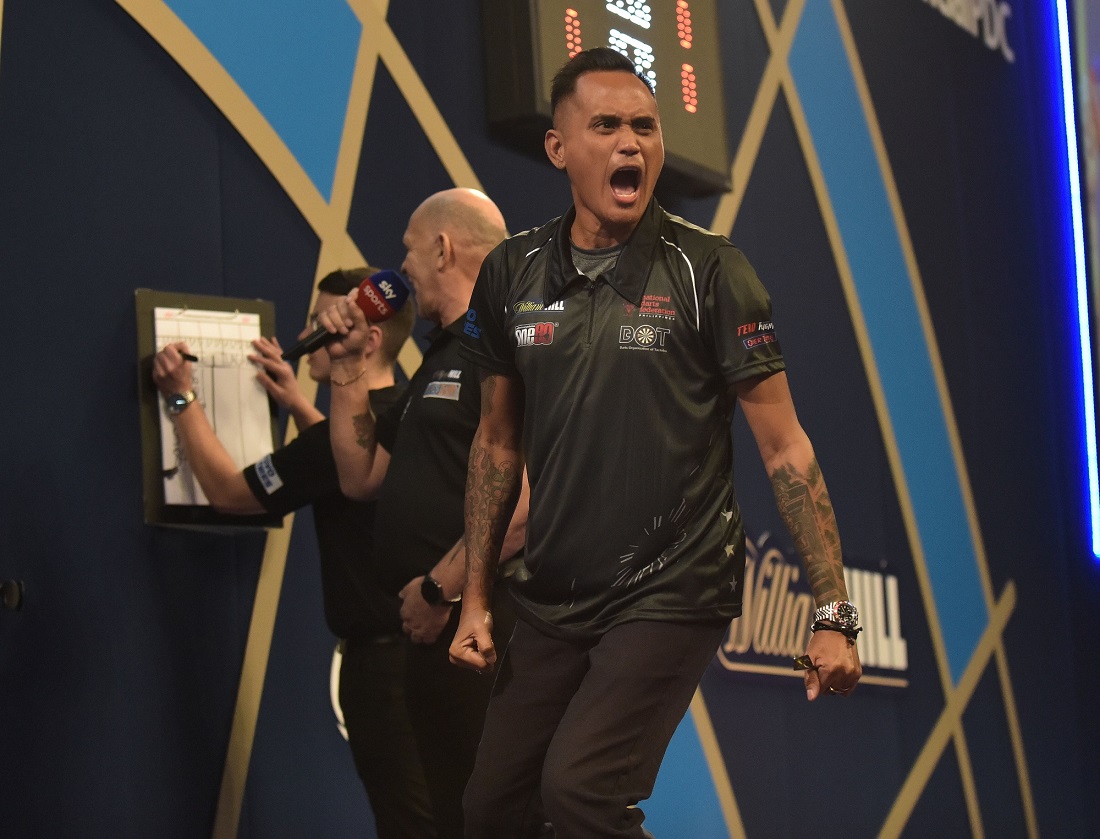 It is interesting to see that here in Europe Ilagan is the best known player from the Philippines but he is not outstanding in the national ranking. In the men's ranking of the NDF, standings from January this year, he only is ranked 18 - far behind the leading Noel Malicdem who seems to be nationally the dominating player. Malicdem was as well "Darter of the Year" in 2016, 2017 and 2020 while Ilagan never was Darter of the Year in the years after 2014 when the NDF introduced that award. He only reached the second place once in 2018 and in some years can't be found at all in the Darter of the year ranking. More often Christian Perez can be found though he only was 2014 Darter of the year but often was placed high up. The Philippines don't seem to be a member of the WDF - not one player from the Philippines appears in the WDF ranking. Of course Corona didn't spare the Philippine darters who probably all will lack match practice.

The best known players from the Philippines are:

Lourence Ilagan, who plays not only steel-darts but is a very successful soft darts players as well. Ilagan was born in 10978 and lives in Cainta, Rizal on the Philippines. His nickname is The Gunner and he plays Monster Gunner darts. He plays on the PDC Asian Tour and took not only part in several PDC World Championships but played with different partners in the PDC World Cup as well. 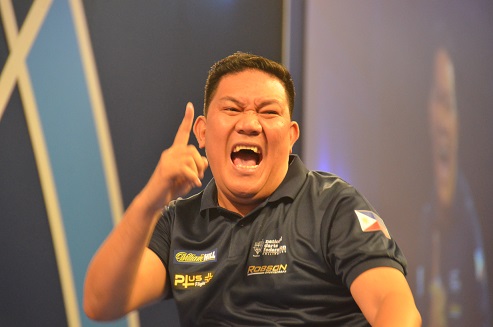 Noel Malicdem, born in 1077 seems to be the at the moment strongest Philippine player. Malicdem as well plays on the PDC Asian Tour, where he threw in 2018 when the Tour was played for the first time a nine-darter. 2019 and 2020 he together with Ilagan was Team Philippine at the PDC World Cup. Malicdem, The Gentle Giant , plays with 18g darts.

Rizal Barellano, born 1965, reached 2006 the quarterfinals of the Asia Pacific Cup and was the first Philippine player invited to the PDC World Championship. It doesn't look he is still playing.

Paolo Nebrida is a young upcoming player who reached in 2014 and 2018 the final of the Malaysian Open. 2018 he qualified for the PDC Unicorn World Youth Championship and reached the last 16. He is quite successful on the PDC Asian tour as well. Together with Lourence Ilagan he had qualified for the PDC World Cup 2021 but as he was only vaccinated with Sputnik V he was not allowed to enter Germany.

Gilbert Ulang The 1979 born Ulang , who represented his home country together with Ilagan in the PDC World Cup 2015 is more infamous then famous. He qualified for the PDC World Championship 2017 and there lost in the preliminary round to debutant Kevin Simm. But something fishy was going on in that match and Ulang was banned from PDC tournaments till December 2023 due to match fixing. But Ulang takes still part in tournaments on the Philippines.

There are female players as well in the NDF but more or less nothing is known about them.