In 2004 again two Dutch players stood at the oche during the PDC World Championship. Roland Scholten was joined by left hander Jan van der Rassel - who was born in 1965 and known under the nicknames "The Project" and "Rassle Dazzle". He played from 2001 - 2004 in the BDO. In 2003 he reached the Last 16 of the World Masters and the quarterfinals of the Dutch Open. After his World Masters success he decided to switch to the PDC, but nevertheless played in a few WDF Open events winning the Sunparc Masters in 2006 (defeating in the final Braulio Roncero). Rassel gave his debut in the PDC World Championship 2004. He stayed till 2010 in the PDC and took part in the PDC World Champions 2006, 2008, 2009 and 2010 as well. 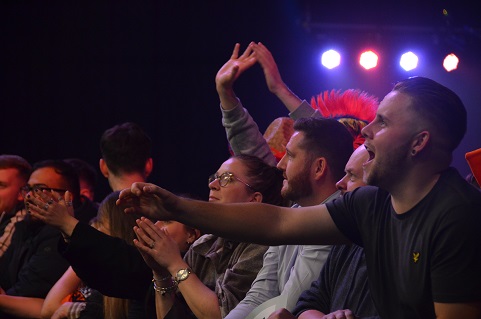 He defeated in the first round Colin Lloyd - seeded that year as number 12 - and in the second round Dennis Ovens before he lost in the third round to Peter Manley. 2009 van der Rassel again stood at the Ally Pally oche - this time qualifed by the new European Order of Merit which only existed for a few years and by which players from the continent could qualify for the European Championship and the PDC World Championship. Van der Rassel defeated in the first round Kirk Shepherd who was the runner-up in 2008, but lost in the second round to his fellow country man Jelle Klaasen.

In 2010 van der Rassel qualified for the last time for the PDC World Championship - this time by the Pro Tour Order of Merit. He defeated in the Preliminary Round German Tomas Seyler but lost first round to Dennis Ovens.

After this last World Championship appearance one didn't hear much more from Jan van der Rassel, who didn't manage to find sponsors to continue his career. 2011 he took part in the Police Masters and reached the semi-finals --- the last international appearance of the player.


2005 it was Josephus Schenk who joined Scholten. Schenk was 24 years of age and was already well-known in the Netherlands. In the first round Schenk had to work hard to win over American Darin Young. In the second round he got a clear 3:0 win over Englishman Alan Caves. In the third round Schenk met Peter Manley the number 3 seed. And Schenk shocked the darts world by defeating Manley with 4:2. In the Last 16 he lost to Andy Hamilton.

Schenk qualified once again in 2007. In this year he was ranked third in the national Dutch ranking and his second World Championship appearance in the Circus Tavern was eagerly anticipated. But Schenk didn't live up to the expectations. He played a weak first round match averaging only 74.99 and lost to Dennis Priestley.

Schenk played a few more years in the PDC - without success. 2009 "The Orange Machine" switched to the BDO/WDF. He had a few better placings for example in last 32 in the pairs event of the Dutch Open in 2017 and - as a final highlight - reached together with Derk Telnekes the semi-finals of the the same event in 2019. It seems that after that Schenk ended his career.