Talking about rebels and rebellion - in the context with darts you of course think of the split in darts, from which the PDC emerged. Fact is that several of the rebels who were involved hail from this corner of England. One of them till today is considered from his darting colleagues as some kind of a "traitor" - Mike Gregory.

Gregory, born 1956 in Bath, played since 1983 on the BDO circuit. 1984 he for the first time qualified for the BDO World Championship, 1990 he reached his first World Championship semi-final and 1992 his first final. He lost to Phil Taylor and many dart fans till today consider the match as best darts match of all times. Gregory even had match darts.Gregory never was world champion but he won a lot of other televised darts tournaments in the 1980s and early 1990s. He was a twice News of the World Champion as well. In 1992/93 when the number of televised tournaments decreased more and more due to the sports image and it grew more and more difficult for the players to earn their living with darts, 16 top players left the BDO to found another organization (the PDC) and tried to get new events on TV. One of those players was Mike Gregory and he won the first of the tournaments - the Lada UK Masters. Chris Johns was the first of the players to return to the BDO and Gregory followed soon after him, a decision he didn't inform his colleagues in advance something his friend never condoned. Till 1995 Gregory stayed quite successful in the BDO, but then his form got from bad to worse and he disappeared from the circuit. He still plays County darts and exhibitions but he never really reconciled with his former friends who were loyal to the PDC. The quarterfinals of the UK Open turned out to be as close as I had expected as all eight players can play on the same level.
Alan Norris had to play in the first quarterfinal against Kim Huybrechts and two times was in the lead. But Huybrechts didn't give in and managed to draw both times and then moved up to 9:8. He had a matchdart on the double 16 but missed! So Norris managed to draw 9:9 and was stronger at the beginning of the deciding leg. But Huybrechts overcame his disappointment and got another match dart - this time on the bullseye. And he missed again! Norris had no problems to finish off his 60 points and won the match after all. Looking at the whole match it was a deserved win and even Kim Huybrechts took it quite calmly. Next on was Gerwyn Price against Ian White and it was as dramatic. White twice was behind but finally ended leading 9:8. Price managed to draw with a double 8. In the deciding leg it looked White had the advantage again but when he had 20 points left his nerves let him down and he bust hitting the double 15 instead of double 10. Price was on 160 points rest but it was quite clear for him he had to hit as it was his one and only chance to win. He stayed calm and hit! White left the stage devastated while Price celebrated. Then Simon Whitlock met Daryl Gurney at the oche and almost unbelievable we saw a third thriller which was decided in a deciding 19. Leg as well! From the three quarterfinals it was the only one which was dominated at the beginning by one player till Whitlock was 7:4 in the lead. Finally Gurney gained momentum and won four legs in a row. Whitlock managed to draw 9:9. But in the deciding leg he had no chance at all and Gurney threw a 12-Darter for the win. Gurney reacted hugely emotive and burst into tears, he clung to a slightly bewildered Whitlock. As Gurney told afterwards he dedicated the win to a close friend who had passed away in January. Quarterfinal number four was as thrilling as the other three and even more high class. Peter Wright and Raymond van Barneveld both threw some outstanding darts. In the first legs both players threw a 180 and for six legs the match was a head-to-head race. Then Wright managed to get a lead of two legs, but van Barneveld managed to draw and to get an 8:7 lead. In this moment the venue suddenly was pitch-black and the TV broadcast broke down. As we heard later a generator had broken down. We in the press room didn't hear the loud bang when it happened - it was only heard in the venue but our TV screen suddenly turned black. Astonishing fast the issue was dealt with and players and officials were able to return on stage. Difficult to say how much the forced break affected the two players but it looked like van Barneveld lost the thread while Wright managed to move up a gear and win the next and last three legs of the match. Similar to Gurney Wright almost burst into tears though no one was there to whom he could cling as van Barneveld had left the stage immediately. Van Barneveld was so disappointed he tweeted he would withdraw from darts. Luckily for us all he didn't but returned to Glasgow to play Premier League. After this thrilling and emotional afternoon session all - including the players till in the tournament - needed a break. Some left Butlin's, Peter "Snakebite" Wright fetched himself snakebite at the bar, in some spots already the removal started. The weather had again changed from sunshine to rain and wind and on the way between press room and the big tent venue one almost was blown away... Due to the wind the venue had chilled to the bone in the afternoon and the crowd had started to put on anoraks and windbreakers. But surprisingly when the break was over the temperature in the venue was agreeable to warm again! The evening session started with the first semi-final between Alan Norris and Gerwyn Price. Again we could see a rather close and thrilling match - none of the players seemed to be able to really get an advantage. In the end Gerwyn Price won and progressed into the final. What an achievement after so few years playing darts professional.

In the second semi-final it looked at the beginning Gurney had to fight his nerves and he didn't play as strong as against Simon Whitlock. Peter Wright instead didn't look like he had any nerves at all. He played as confident as in the matches before and won the match 11:5. Gurney's fightback had started too late. After the match Gurney persuaded Wright to a joint dance across the stage. After a short break the final was on! Price seemed to be rather unconfident which unluckily showed in his finishing. When he finally settled it was too late - he no longer could stop Peter Wright who as the best and most consistent player of the tournament deservedly won his first major TV title. And Wright burst into tears for a second time. 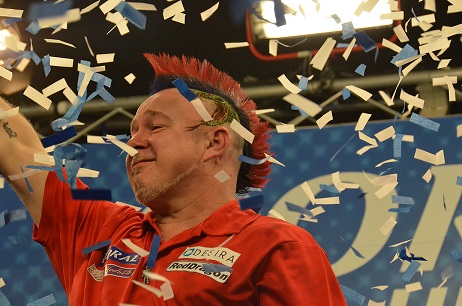 The UK Open this year were a tournament with quite a lot of upsets starting on the first day with Michael van Gerwen's withdrawal from the tournament. Nevertheless the winner was no surprise winner. Other top players like James Wade, Adrian Lewis or Gary Anderson had been eliminated early from the tournament. Yet the other players used the opportunity and showed they are really good dart players as well. Again with Paul Hogan one of the amateur qualifiers became the crowd's favorite and a real giant killer. Though of course even as Hogan is an amateur he is a very experienced and quite successful BDO player. Not really convincing this year were the upcoming young players, none of them reached the quarterfinals. The not many neither Dutch nor British participants were all out at the latest after the fourth round. There is no new Phil Taylor or Michael van Gerwen in sight. But of course one can argue that without the two players the tournaments are more thrilling and surprising. And you will not only wonder who will be the other finalist this time. 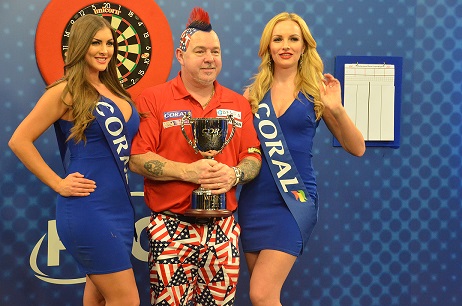