The very first "European Football Player of the Year"

When I cam to Blackpool this year I of course still had football on mind - no wonder as "we" just had become world champion. And no wonder that I looked for football in Blackpool and to be sure made a find. Well - two finds in fact. Here in Blackpool football is at the moment the number one news as well though it's the local football club and it only produces negative head lines- you'll hear more about it in another article soon.
But I as well came across a player who during his long, very long career never made negative head lines at all and who - though only geographically - has a connection to darts. I talk about the very first European Football Player of the year Stanley Matthews or more precisely Sir Stanley Matthews. 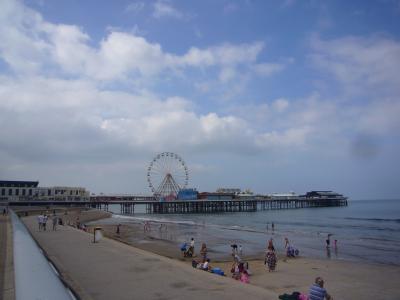 Sir Stanley Matthews was born on 1. February 1915 in Stoke on Trent (!) as son of a professional boxer. When he was fifteen years old he started to play football for Stoke City - first reserve and with a salary of one pound a week. Two years later he became a professional, a midfielder, and his wage climbed to the height of five pound a week - at that time the most a football player could earn. When Stoke City started to slide down the table in the 1937/1938 season, the at that time already well known and very popular Matthews asked for a transfer to Blackpool but Stoke didn't want to release him and one year later the problem resolved itself anyway when World War II started. Matthews played football during the war - he was stationed with the RAF near Blackpool - but of course there was no league play in that time.

When the war was over Matthews was already 30 years old, an age the career of most football players nears its end. But for Matthews it only really started now.

After he had recovered from an injury Stanley in May 1947 finally changed to Blackpool. Of course there were enough people wondering whether Matthews was still worth the money with 32 year. But those voices soon fell silent. With and by Matthews Blackpool FC had throughout the 1950th it's most successful and best years. After two attempts in 1953 Blackpool finally won the FA Cup and the match was always known as "Matthews final" though it was in fact his team mate Mortensen who scored the hat trick. Matthews played interrupted by injuries till 1961 for Blackpool and then returned - now 46 - for some more years to Stoke City. There he played his last match a short while after his 50. birthday and afterwards wondered whether it hadn't been too soon to end his career..

Of course he didn't stop entirely to play football - his very last match he played in the age of 70 for the English Veterans. Matthews worked some time without success as a manager and travelled around the world to coach amateurs - making once again the headlines when he ignored apartheid and formed and coached 1975 in Soweto a team of black schoolboys for whom he organised a trip to Brazil - it was in fact the first black team ever which travelled outside of South Africa. 2000 Matthews died with 85 years in Stoke of Trent.

But what was now the special in Stanley Matthews beside his extraordinary long career? Why was he the first footballer to be knighted while still active? And why was he the very first "European Footballer of the Year" in 1956?

Matthews to be sure is one of the real legends of the sport and one of the players who shaped English football and the English style to play. Matthews was very slim, almost frail and did a lot for his bodily fitness. He often jogged along the beach in Blackpool with his shoes containing lead. He was a vegetarian, a teetotaller and never smoked. He was a very fair player and in all his long years as a footballer never was booked or sent off. His opponents feared his speed. As Franz Beckenbauer said he was just not to be stopped.
Though in younger years quite successful in scoring goals, he later saw himself more as the one to prepare goals by his pinpoint crosses to members of his team. He could play with both feet and was a good header as well. Matthews was more or less was in inventor of dribbling with his so called "Stan Matthews trick": with the ball at the foot he moved in the direction of his opponent and so that the opponent had to shift weight and lost his balance opponent lost his balance and he could pass him at the opposite side. When a player like Stan Matthews is in command of that trick he can even can do it with both feet and several times in a row. He just was - as Pele said - "the man who taught us the way football should be played".