Superbly amplified or the second round of the World Matchplay

Might be it is not only me who is curious and some other darts fans as well wondered why the arena in Milton Keynes is called "Marshall Arena".
But it can well be that even those who don't mind and are only happy that finally live darts is back will find the answer to the question interesting.

Marshall is the name of a company. Might be it will click now by a few. At least my husband reacted immediately - "Marshall - of course that's the crème de la crème!" The crème de la crème for all those who are somehow involved in rock music be it by playing electric guitars or the drums. Or as a member of a band or just as fan of Jimi Hendrix, Eric Clapton, Pete Townsend and many more. Most amateurs will dream to have one and the professionals will have one - Marshall is the leading manufacturer of amplifiers. And without those amplifiers the typical sound of Jimi Hendrix, Fleetwood Mac or even the Rolling Stones would either not exist or would be completely different. 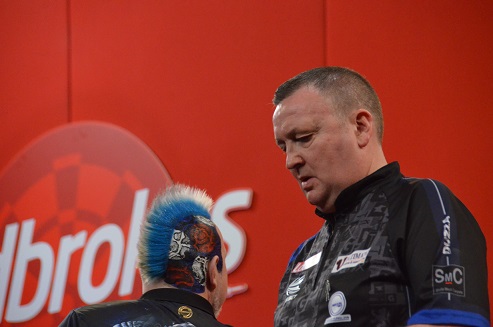 The founder of the company Jim Marshall was borne 1923 in London and was an amateur drummer in his youth. He opened a music shop in London which sold instruments. Many young talents who were friends of his son Terry were among his customers and so the shop soon was a centre for young rock musicians who often enough moaned that the existing amplifiers didn't produce the sound they wanted. Jim and Terry decided to help them and constructed one after some experiments - the amp number 1. Many more amplifiers followed which were all as successful and the company had to move. It moved in fact several times before it came to Bletchley - which is a part of Milton Keynes - in 1967 and since that time the headquarter can be found there. At this time Marshall was thanks to a visit by Jimi Hendrix internationally known. It is not quite clear how that happened. In one version Hendrix got interested in the company after a promoter had forced him to play with the Marshall equipment of the venue because he didn't want to remove it for Hendrix' own. In another version Hendrix' drummer Mitch Mitchell worked for some time in Marshall's shop in London and introduced them. The rest is history and till today Marshall Amplifiers are in demand around the world. Today the company produces speakers and head phones as well and the newest amplifier is digital and completely programmable. Since 2017 there exists a Marshall record label as well.

Should you want to hear more about the company here two short videos:
Behind the Scenes
und
Marshall Memories

I think one can suppose that in the Marshall Arena Marshall equipment is used. And so we are back at the World Matchplay and have a look at the astonishing second round.

The second round was played on two evenings and after them the two top favourites to win - the number 1 of the world Michael van Gerwen and the world champion Peter Wright - were eliminated from the tournament and beside them the top ten players Mensur Suljovic, James Wade and Daryl Gurney.
The first night of the second round started with a thriller. Michael Smith defeated Mensur Suljovic in overtime 14:12. Looking at the averages it was an average match in which Smith played a little bit better than Suljovic and won deservedly. Smith threw 10 180s - Suljovic only 2, and probably this besides Smith solid finishing made the difference.
It followed another match on the same level between Gary Anderson and James Wade. Anderson was already 9:4 in the front when Wade started one of his feared fightbacks. In this case it was not successful. Anderson managed to stay in the match and won 11:8.
What followed was the biggest upset of the event - out of all players Simon Whitlock whom many already had written off defeated Michael van Gerwen who had a pitch black night. Why van Gerwen played like this is not known. But he never was in the match at all and was at the first break already 0:5 in the rear. He never managed to really reduce the gap and an unchained Simon Whitlock won 11:4. Van Gerwen couldn't hit a double and his average was just 90 - almost embarrassing for him. .
The last match of the night was the best from the averages and it was a very close one in which Gabriel Clemens only was once in the lead - almost at the end of it. But Krzysztof Ratajski managed to win.
And so Peter Wright moved up into the position of the top favourite - but only for 24 hours.
The second evening with second round match was not as thrilling as the first one - most matches were a little bit one-sided, but two had surprising results.
First on was Vincent van der Voort v Daryl Gurney who looked from the start like he had given in already. There was a very short mini comeback from him, but even that seemed half-hearted. Vincent van der Voort enjoyed a comfortable 11:5 win.
More thrilling was the following match between Dmitri van den Bergh and Joe Cullen though it was not a good match. But van den Bergh showed he has learned by now to win those matches as well. It was a close call at 11:9 but it was enough.
But of course this night had its upset as well - Glen Durrant defeated Peter Wright who had been brilliant in the Summer Series. Wright played the only over 100 average of the second round, but he couldn't find a double and even as a spectator I grew desperate. Probably Wright's glasses or -better - his in this match missing glasses were the reason. During the Summer Series Wright played for the first time with glasses and he had everything under control. In the first round he wore them for the first half of the match but had taken them off as the lime lights blinded him. For his second round match he appeared from the start without glasses on stage. I can imagine it gets difficult when you change around between with glasses and without glasses - especially on the not so big doubles. With glasses you can see everything clearly - without everything is blurred. Other players like Gary Anderson and Ian White seem to be able to handle it and should Wright decide to wear them all the time and not to change all the time like he does with his darts he will get used to them as well. But his chance to win the World Matchplay was gone. We'll see what will happen during the Premier League days played in Milton Keynes in August..
In the last match of the second round the rejuvenated Adrian Lewis defeated Danny Noppert. It was another good performance from Lewis, Noppert just was not strong enough.

And so - after the elimination from van Gerwen and Write - Glen Durrant was suddenly the favourite to win the World Matchplay.