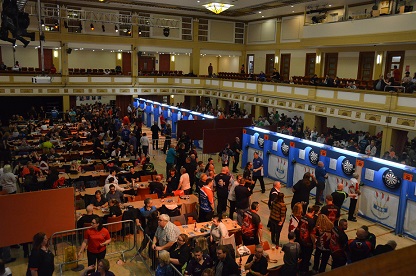 From all the tournaments I visit the Winmau World Masters usually are the most exhausting. Nowhere else so many players are around, nowhere else several tournaments are played at the same time and nowhere else the participants come from so many different countries.
This year the 'Winmau World Masters returned to the Bridlington Spa, a building which looks a little bit like the Winter Gardens in Blackpool but it is much smaller. As the BDO/WDF thought e should stay fit the press room is at least two floors above the venue. But the rear wall of the room is mostly glass and gives you a great over view on what is going on in the venue. 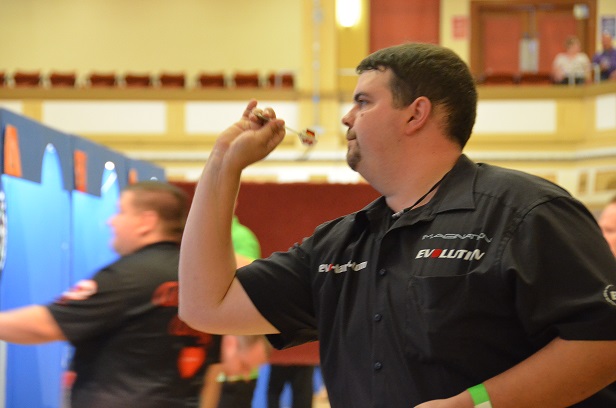 Women and men played their events at the same time. As usually much more men then women took part but nevertheless the women's tournament took longer. The reason was that for the women only eight boards existed squashed in somewhere to the left of the stage and half of them almost impossible to watch. The men on the other side had about three times more boards to play. While down on the main floor the grown-ups played the boys event took place in a not really big room first floor. The girls started to play their event when the ladies moved for their last 16 matches over to the men's Boards.
New this year: the last 32 of the men and the last 16 of the women were played as floor matches at the end of day one and all men's matches and later all of the women's matches were played at the same time. The idea was to make day 2 a little bit shorter but now of course day 1 was a very long day and one couldn't follow all of the matches.

As always the place was rather busy on day one. I've no idea whether there were paying fans in the crowd or all were friends and relatives of the players. But it was crowded and confusing. I tried to take as many pictures as possible. Many of the BDO/WDF players I only know by name and have no idea how the look. Some have changed over the times and I didn't even recognise them like Toon Greebe who till a few years ago seemed to switch between the BDO and the PDC all the time. Even worse - I had no idea at al how the German participants looked but finally managed to identify the German number 1 Michael Unterbuchner and Ricardo Pietrecko. It was not difficult to follow their matches as they played most of the time on neighbouring boards. Both managed to reach the last 64 and reacted completely different. While Pietrecko was delighted despite he lost to Northern Irelands Neil Duff - it was the first time he played such a big tournament - Unterbuchner was devastated. Even more successful in the men's tournament was the third of the German trio - Gabriel Clemens, who reached the last 16 and will play on the second day on the stage against Dutchman Chris Landmann.
But even this success was not the best the German had to offer on day 1: Nico Blum played himself into the boy's final and will tomorrow stand on the stage of the Spa as well. As I whenever I went to watch the boy's event never had seen Nico I already had believed he had been eliminated early. 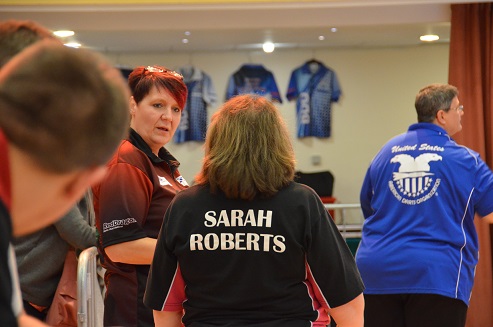 Of course I not only had a look on the German players but spied others as well for example Polish Krzysztof Ratajski, participant in 10 of 11 European Tour events this year so far, who reached the last 16 as well. And some of the big names in BDO were around as well like Ted Hankey, Andy Fordham or Martin Adams.
When I look at the results the idea to play the last 32 or last 16 on the first day of the event didn't seem to work. The opponents of the seeds had warmed-up all day nicely while the seeds were plunged in at the deep end. Nine from 16 seeded men and three from 8 seeded women didn't survive their first matches among them Lisa Ashton who lost to Japanese Mikuru Suzuki or the number three seed of the men Scott Mitchell who lost to Tony O'Shea who had looked out of form for some time now.
The venue soon was empty after the last match and I switched the bad internet connection of the press room with the good one in my guesthouse. I already wonder what the second day will bring. 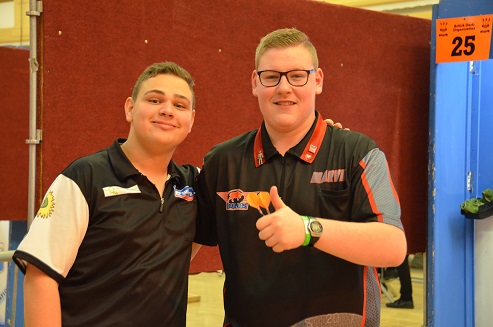