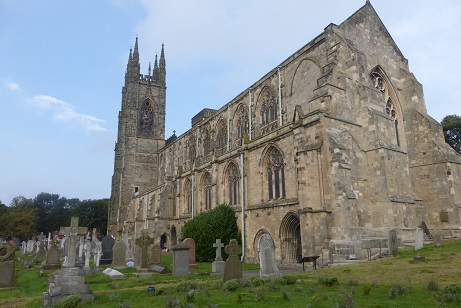 The second day of the Winmau World Masters started at 2 p.m. and I used the sunshine to take a look around. Bridlington till today has an active harbour and is well known for the caught shell fish. Bridlington is a very old settlement. It could be once a roman town existed here and that the origins of the harbour date back to the Romans as well. But erosion is a big problem here at the coast and one might never be able to prove it. Prove though exists that the Normans had some influence here especially a family de Gant which in 1133 founded an Augustine priory here of which parts still can bee seen. Bridlington originally were two different settlements - one down around the harbour the other developed around the priory - the old town. Most tourists can be found near the harbour and the beaches. Today the railway from Hull to Scarborough divides the town again in two parts.

The second day of the Winmau World Masters began with the two youth finals. First on were the girls and the thirteen years old Beau Greaves dominated the match. She played so good she probably would have been able to eliminate some of the women who later played in the quarterfinals from the event. 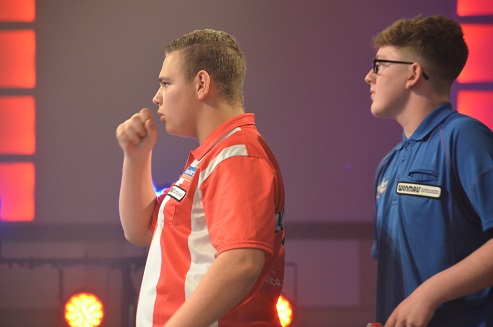 I of course was especially looking forward to the boy's final and it really was a high-class and thrilling match. Nico Blum didn't play bad but I felt the one year younger Irishman Keanne Barry played better most of the time. Blum's strongest leg was the last leg of the match in which the young German showed no nerves at all and he won it and the title as well.

After a very short break the women's quarterfinals followed. First on was a not really good match between Deta Hedman and Sarah Roberts in which it was Roberts who was responsible for the few darting highlights and won in the end. Sometimes one just can't understand why a player like Deta who has such a lot of experience and is the number 1 player of the ladies still can't bring her A game on stage. 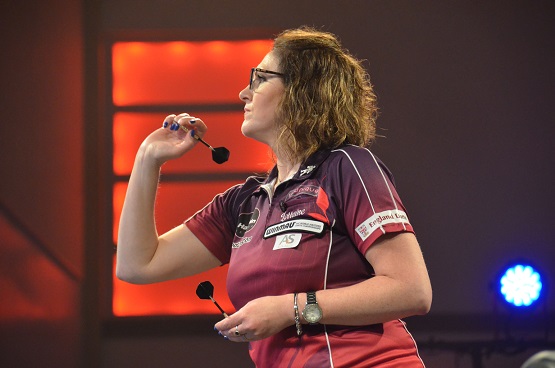 Not really much better was the second quarterfinal but at least Japanese Suzuki showed a good performance. But she was not able to keep her nerve and couldn't find the winning double. So Corrine Hammond was a very lucky winner indeed.
The third of the quarterfinals was by far the best one. Both Anastasia Dobromyslova and Lorraine Winstanley scored well and showed a good performance. Winstanley is the player in form, Dobromyslova the player getting slowly there again after the birth of her son. A nevertheless deserved win for Winstanley.

The last quarterfinal was not a highlight of women's darts too - it was not bad but both players - Trina Gulliver and Tricia Wright - are fast players and so it slightly slugged. Wright won it and as she played better then Gulliver she deserved the win. 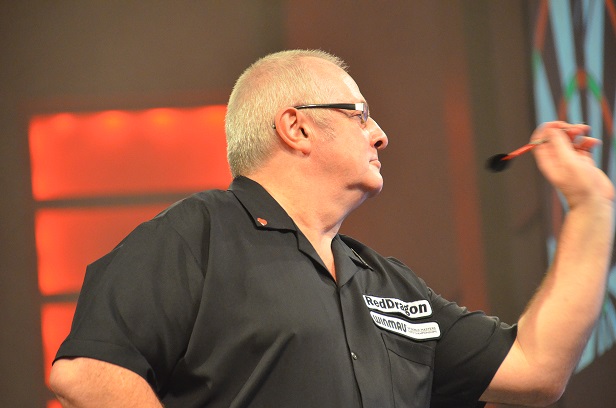 An hour's break and the men's matches started televised by Eurosport. And the men got a real Walk-on with walk-on girls!!! Eurosport had schedules eight matches in four hours - well already the first match between Mark McGeeney and Neil Duff went into overtime. It was an epic match which started slow but got better and better. The crowd supported the underdog but Duff missed too many doubles near the end and McGeeney progressed with a 3:2 win into the quarterfinals.
Match two than was a fast one. Martin Phillips and Toon Greebe are both fast throwers but Greebe had no chance at all against Phillips and the Welshman won 3:0. The reason why match three was a fast one as well was totally different. Ross Montgomery had big problems with his throwing arm and just couldn't produce. So underdog James Hurrell got an easy 3:0 win. What a pity both for Montgomery and for Hurrell as Hurrell was more or less the only player on stage.
The next last 16 match brought with Gabriel Clemens another German player on stage and he played against Dutchman Chris Landman. Landman was very nervous. Yesterday he had defeated Scott Waites in the last 32. To be sure he had played better then against Clemens who played solid while Landman seemed to settle on scores around 60. But he didn't stop trying to hit the 20 segment and never changed to other segments on the board.. So he had no chance against Clemens who didn't let himself get workup despite his antsy opponent. 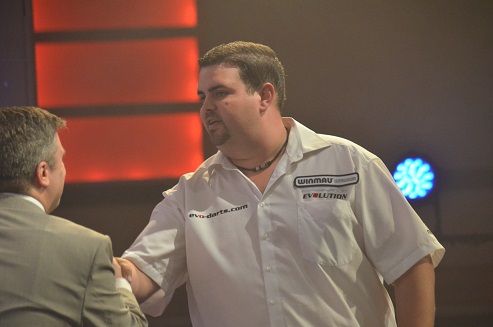 Next was legend Tony O'Shea against Welshman James Williams. Williams was the favourite and first it looked like he really was the better player. But suddenly O'Shea seemed to spark - he would not give in without a fight. And we had a real battle on. O'Shea even had some Matchdarts but missed and Williams progressed into the quarterfinals.
After next walk-on I finale knew who was Cameron Menzies . And I even know now while he entered the event as a seeded player. With a 3:1 win against Australian Mark McGrath who never gave in he stayed in the tournament.
In the penultimate match of the evening - it really was a long evening - Krzysztof Ratajski Played against Scotsman Alan Soutar. Two unseeded players who had eliminated on the first day two seed - Richard Veenstra and Wesley Harm - from the event. Ratajski played as did on the first day of the tournament and so as he plays on the European Tour. Soutar couldn't keep up. Ratajski's scores were just better and he rarely had to pay for his problems to close a leg. Ratajski won 3:0 but it was far from a triumph. 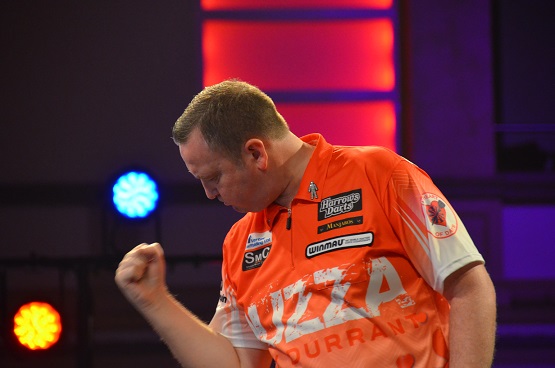 The last match of the evening was between Glen Durrant and another unseeded player, young Dutchman Yoeri Duijster. Durrant to be sure played the best match of the evening and steam rolled his opponent.
Till I was back at my accommodation it was almost 11 p.m... I had watched a lot of darts during the day but most of them had been more average. For me most impressive were the boy's final and the performances of Martin Phillips and Glen Durrant. To win the men's event I have no doubt you'll have to defeat Glen Durrant. Who will win the women's event is more open though due to her performance Lorraine Winstanley has to be the favourite to win.