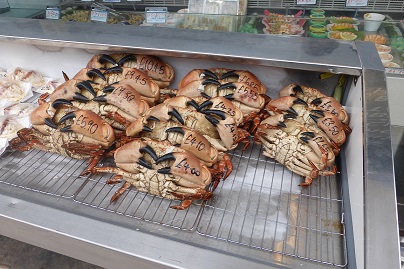 When you take a look around in Bridlington it might attract your attention that the name St. John can be found quite often. This St. John is John of Bridlington, who many years was the prior of the Augustine Priory in Bridlington. Not much is still known about him. And not much is left of the Augustine priory, another church today stands on its ruins. St. John of Bridlington, born in a small village nearby, was already a pious youth who read a lot and joined the Augustines when he was 14 years of age. He seems to have been miracle working and he was the last Englishman to be canonized before the Reformation. It is told that he among others transformed water to wine and that he in person saved shipwrecked from the death in high seas.

But back to the finals day of the Winmau World Masters where some of the players could have been in need of a miracle to progress... The finals day didn't start before midafternoon and first the final of the WDDW Winmau World Masters was played. Winner was Kevin Hunter who defeated Phil Lees 3:1. After that final there was a long break of around an hour in which you could listen to a DJ. or you could of course pass it with eating fish and chips. After the break the quarterfinals of the men and the semifinals of the women were played.

First on stage was Mark McGeeney, the number 1 seed, against Martin Phillips. Contrary to his performance on the day before McGeeney this time played a really good match and won 4:0 - deservedly as Phillips just couldn't keep up. The second match between German Gabriel Clemens and James Hurrell was much closer and hard fought. Both players had a similar level though Hurrell often had to make up a lead of his opponent. Clemens was much better on his doubles and showed no nerves at all. Hurrell gave all but in the end lost 3:4. After those two quarterfinals the first women's semifinal between Corrine Hammond and Sarah Roberts took place. It was not a good match - Roberts played much too weak for that and Hammond progressed with a 4:0 win into the final.

In the third quarterfinal of the men Welshman Jim Williams and Scotsman Cameron Menzies met. The match was astonishing one-sided. Menzies showed a really good performance and steam rolled the Welshman who never really was in the match. He lost 0:4. Menzies was deeply stirred, close to tears and speechless... The last men's quarterfinal brought the so far biggest upset of the tournament: Poland's Krzysztof Ratajski defeated the reigning champion and favourite to win Glen Durrant 4:2. Durrant seemed nervous from the start and didn't manage to focus. He felt disturbed by the clicking of the cameras and other noises from the crowd and didn't find his way into the match. Biggest problem was that he couldn't hit his doubles while Ratajski showed clinical finishing. In the second semi-final of the women Lorraine Winstanley and Trisha Wright met. Wright played better than in the quarterfinals but didn't score as consistently as Winstanley who won in the end deservedly 4:2. The two women were accompanied on stage by a walk-on girl - rather innovative and it delighted crowd and officials. There was more or less no break before the semi-finals of the men began with Mark McGeeney and Gabriel Clemens first on. McGeeney had some problems with the German who showed a good match and quite good finishing. Clemens got the lead before the break but somehow when back on stage McGeeney managed first to level 3:3 and then to gain the lead. But Clemens didn't give in and leveled again. None of the players managed to really pull clear in the last set, not even in the last leg. But McGeeney had the throw and was the first to throw on a finish. He kept his nerve and hit the finishing double in the first attempt. So McGeeney progressed into his second World Masters final while Gabriel to be sure left the stage disappointed. The second semi-final didn't at all develop according to Cameron Menzies plan. Pole Ratajski was in the lead most of the time and Menzies never managed to level. Ratajski hit his doubles better and Ratajski scored better most of the time as well. Menzies, who seemed to hit everything against Phillips, now couldn't hit anything at all and Ratajski was 4:0 in the lead at the break. After the break Menzies had a short comeback and won his only set. He had a dart to win the next set as well but missed and Ratajski progressed without problems into the final. As by now it was already quite late - the men's final had been scheduled to 9:30 and it already was 10.45 - there was no break after the men's semifinals before the women's final started. The women's final was first quite evenly matched game but somehow Corrine Hammonds level dropped at 2:2 and Lorraine Winstanley won three legs in a row and her first Winmau World Masters title. The crowd had dwindled a good deal - many of the players in the crowd had registered for the Lakeside play-offs on the next day which would start at 10 a.m.... While the players started into another long day of darts before many of them traveled on to Kobe in Japan for the WDF World Cup the next morning I started after an English breakfast my long journey back home. 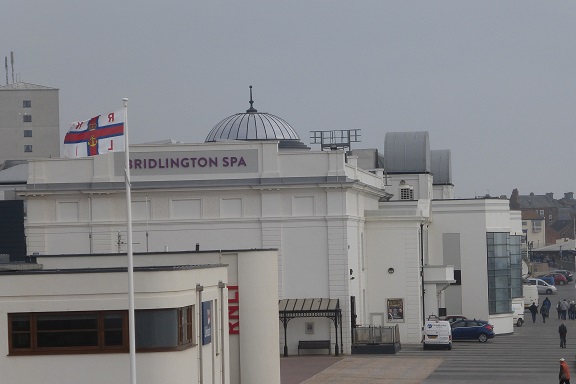 It had been a very interesting tournament - with a surprise winner in the men's events. Might be the reason for this had been that the seeded players had entered the tournament "cold" on the first day while their opponents had played darts most hours of that day and had warmed up nicely. In the women's event nevertheless the "in form" player had won. But I am sure the BDO/WDF will think about the problem as they will think about the schedule of the finals day which to be sure was not ideal...
Of course I enjoyed that the German men had been rather successful and that the boy's event was won by a German youth. I liked the venue, Bridlington Spa, and the small seaside town Bridlington with its harbor. It's a pity I had not more time to explore the country side. And that I had no chance to try the famous Bridlington fish. Reasons enough for another journey there.