Out of Darkness Cometh Light... 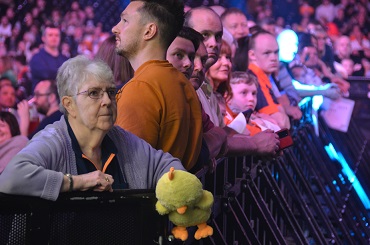 I am sure everybody reading this immediately will realise that Global Darts this year returned to Wolverhampton as this is the official motto of the town, not a religious one by the way; it has nothing to do with the bible at all. But you can use it for many situations.

I couldn't help remembering it when during the evening after I had arrived here suddenly everything went pitch black. I sat in my apartment reading a crime story, in which many strange things happened in the dark and it felt slightly creepy . outside only the mobile light still lightened the night. Then a siren started to wail and it felt even creepier. Well it took around three quarters of an hour till electricity was back and the siren stopped. Welcome to the Black Country. though it is not called Black Country because it's always dark here. 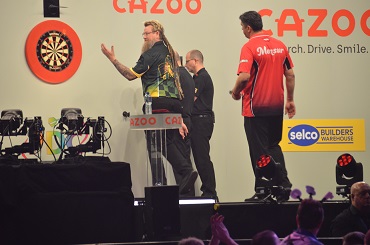 Not too much changed in town since I've been here last. The tournament still takes part in the Aldersleigh Leisure Village as the Civic Hall is still renovated. It's quite a big project now as the complete part of the town will be remodel as attractive town centre. I heard rumours next year the Grand Slam will return to the Civic Hall but that's not an official PDC rumour.

The tournament didn't change much either though several long year participants failed to qualify or didn't even try to qualify - Gary Anderson and James Wade for example. But at least I didn't really miss them on the first day of the tournament. It was an interesting day with a few minor upsets, some impressive debutants and a good mixture of experienced and upcoming players. There were some very close matches who needed a deciding leg and some which were very one-sided.

The tournament started with the match between Simon Whitlock and Mensur Suljovic in the afternoon session, both very experienced players. Suljovic looked rather nervous, nothing seemed to work for him and he started to get frustrated. So Whitlock got a clear win. In the second match German Martin Schindler came on stage, who played a good match though he was beaten by Dirk van Duijvenbode who played a very strong deciding match - too strong for Schindler. Joe Cullen was next on and he gave Ritchie Edhouse no chances at all a one-sided affair and a good win for Cullen. Dave Chisnall - who showed some great performances recently - was strangely weak against Raymond van Barneveld, a strange match from him which ended in a defeat. 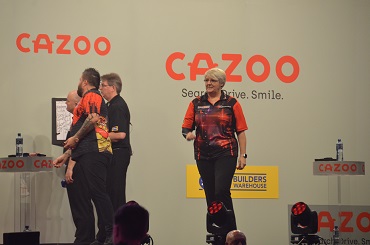 Rob Cross had a weak start into the match and Adam Gawlas won the first two legs but suddenly he turned up the heat and Gawlas couldn't keep up any longer. The game between Danny Noppert and Christian Perez was rather evenly matched, but Perez missed with his Matchdart while Noppert hit the winning double - a pity for Perez at his debut. Gerwyn Price had no problems with Youth World Champion Ted Evetts who still has his problems on the big stage. In the last match of the afternoon session Lisa Ashton managed to keep Michael Smith under pressure for the first six legs but than Smith left her behind. In the evening-session the Groups E-H Played their first group matches and there were some defeats I hadn't expected. For example in the very first match Luke Woodhouse defeated Ross Smith. It followed the match between Ryan Searle and the upcoming Josh Rock - a very close match on equal footing - these young players like Josh Rock breath new life in old tournaments. Damon Heta looked somehow scatter-brained and was almost steam-tolled by Jermaine Wattimena. Another very close match between Nathan Aspinall and a spirited Alan Soutar followed which was won by Soutar. Luke Humphries showed a strong performance and rung rings around his opponent Scott Williams who scored with his shining bright yellow shoes which delighted the press room. 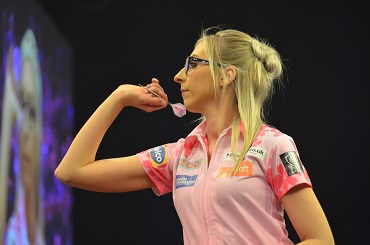 Peter Wright didn't play his best match but Fallon Sherrock played even weaker and was far from clinical on her doubles which normally is one of her strengths - so Wright won. Van Gerwen showed a strong performance as well in the penultimate match of the night and defeated Nathan Rafferty who played courageous but just was not good enough. The tournament day ended with the match between Jonny Clayton and Leonard Gates, another debutant. To be sure it was a far from outstanding match from Clayton but he dominated the match and won with the only whitewash of the day.